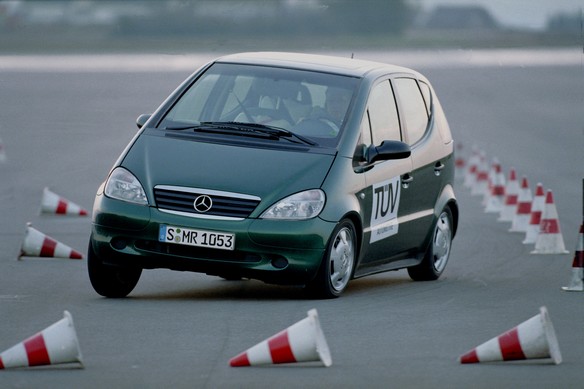 Daimler-Benz presented its dynamic handling control FDR, a system jointly developed with Bosch in Arjeplog in Sweden in mid March 1994. It had its market launch a year later under the name Electronic Stability Programme (ESP®) and represented a further milestone in the field of active safety. The launch vehicle was the Mercedes-Benz S 600 Coupé (C 140). A few months later it appeared in the S-Class saloon (W 140) and the SL roadster (R 129). But the honour of being equipped with the system in large unit numbers went to the A-Class. In response to the “moose test”, the A-Class was equipped with ESP® as standard from February 1998. By August 1999 it was standard-fit equipment on almost all Mercedes-Benz passenger cars.

The Electronic Stability Programme (ESP®) reduces the risk of skidding on cornering and maintains the vehicle’s directional stability even in critical conditions, for example on black ice or wet road surfaces. It increases vehicle safety by selectively braking individual wheels, thus counteracting the tendency to skid in critical handling situations and allowing the driver to maintain control of the vehicle. Oversteer is corrected by applying brake to the front outer wheel, understeer by applying brake to the rear inner wheel. ESP® can also curb engine output to reduce vehicle speed. 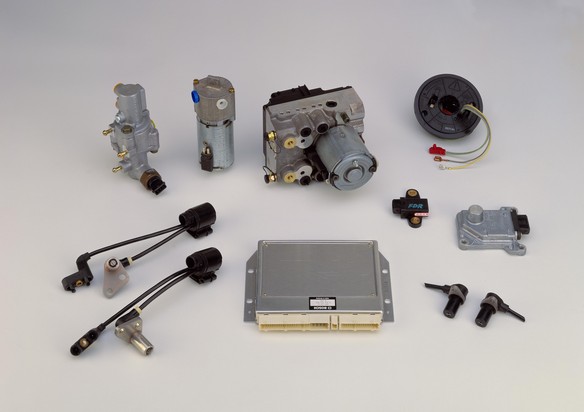 The history of ESP®
Arjeplog, Northern Sweden, March 1994: Two Mercedes-Benz test cars performed circuits on frozen Lake Hornovan. Whereas one maintained directional stability around the oval circuit, the driver of the second car clearly had problems keeping the car on track. The car’s rear end repeatedly swung out on the icy circuit, requiring the driver to apply opposite lock and accelerate again. These manoeuvres were closely watched from the edge of the circuit by journalists from all over the world. They were witnessing the world premiere of a milestone in automotive technology, jointly developed by Mercedes-Benz and Robert Bosch GmbH – the test car with good directional stability was equipped with the active safety system ESP®.
The anti-lock brake system (ABS) smoothed the way for ESP®. ABS made its debut in 1978 in the S-Class (W 116). Just a few years later came acceleration slip regulation (ASR, series launch 1981), an advanced development of ABS designed to control the interplay of longitudinal forces between tyres and road surface not only during braking, but for the first time also during acceleration – while acting both on the brakes and on engine torque. Then came automatic locking differential (ASD, 1985) and the innovative 4MATIC permanent four-wheel drive (1985). A common feature of these systems is the way they measure wheel slip using advanced microelectronics and hydraulics in order to improve a car’s longitudinal dynamics. 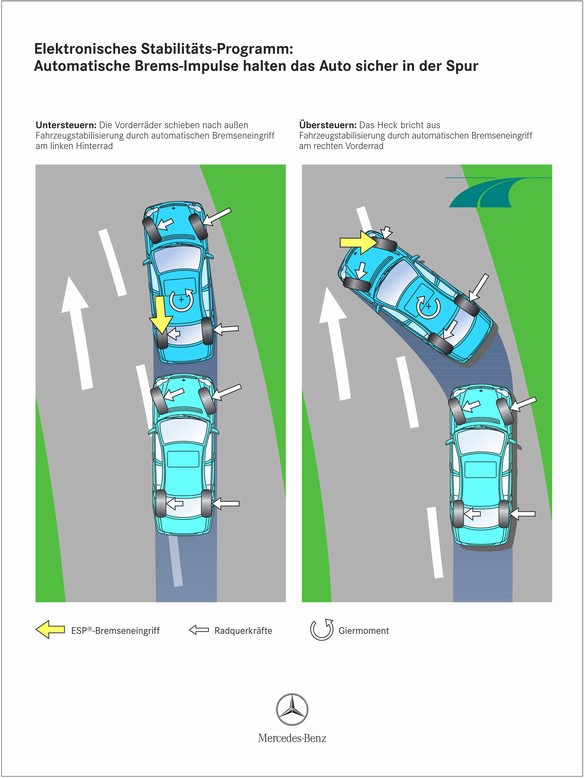 Driving safety for every situation
The Mercedes-Benz engineers did not stop there however. Their next goal was to improve active safety for every situation – on cornering, on swerving to avoid an obstacle or during any other vehicle manoeuvre involving lateral forces and with a high risk of skidding. For this reason the company launched another ambitious development project. Under the working title “lateral slip control” the engineers explored technical possibilities to measure a car’s skid movements and reduce these by means of selective interventions in running gear, engine and transmission. After extensive computer simulations and preliminary examinations, the first prototypes equipped with such a system were trialled in 1987 and in the years that followed clocked up many thousands of test kilometres.

At the same time, the invention proved its operational viability at the Berlin driving simulator. Here the Mercedes-Benz engineers asked 80 motorists to drive at 100 km/h along an imaginary country road, on which dangerous patches of black ice lurking in four corners offered over 70 percent less road adhesion. Test results showed that without ESP® 78 percent of the test drivers had no chance of keeping the car on a safe course, leading to as many as three successive skidding accidents. Using the active driving safety system, however, all test drives were skid and accident-free. No wonder, therefore, that the developers wasted no time putting ESP® to the test on real roads. Series development began in 1992. Over 40 engineers from Mercedes-Benz and Bosch worked together on the pioneering project, which finally culminated in series launch in 1995. 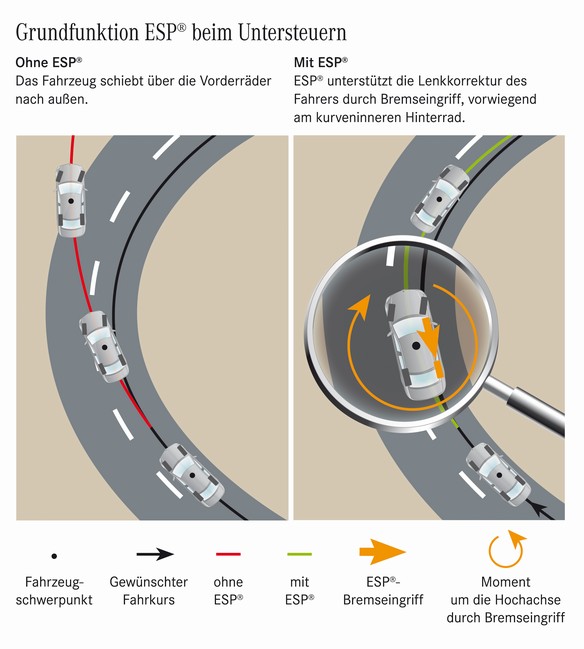 “If all cars were equipped with the stability programme, over 20,000 of the serious accidents that result in over 27,000 victims on German roads could be avoided,” says Dr. Thomas Weber, member of the Board of Management of Daimler AG responsible for Research and Technology and Head of Development Mercedes Benz Cars. According to a representative random test analysis of latest accident statistics, Mercedes-Benz passenger cars are much less frequently involved in traffic accidents with serious consequences since the introduction of standard-fit ESP® than other car brands. In 1998/1999 an average of 20.7 percent of all accidents involving newly registered Mercedes-Benz models were driver-related accidents. This figure fell by over 42 percent as a result of ESP® in the period 2002/2003, for example. In the case of passenger car models from other brands, on the other hand, the proportion of driver-related accidents as a percentage of accidents as a whole decreased by only approximately 13 percent during the same period. 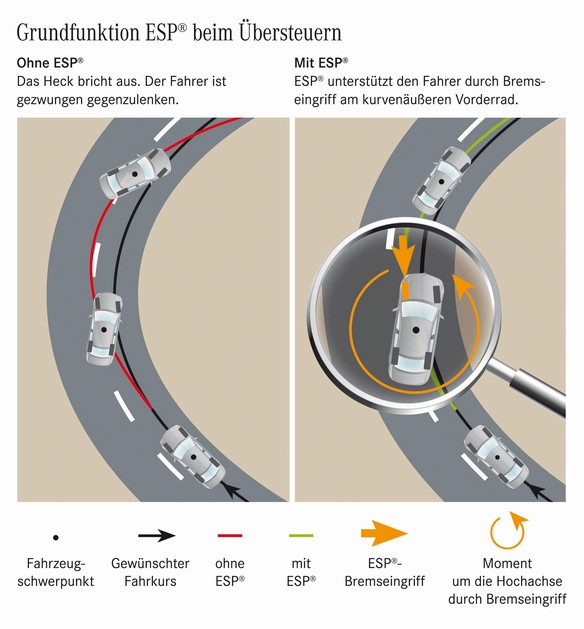 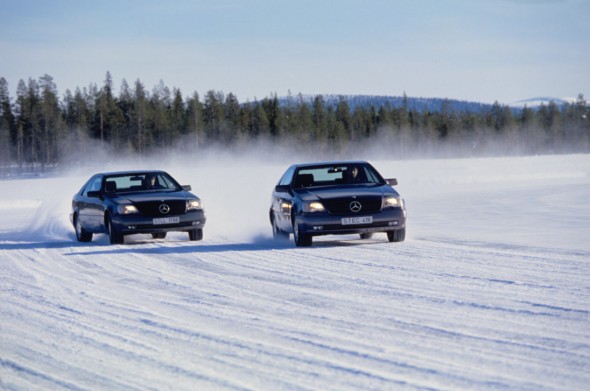 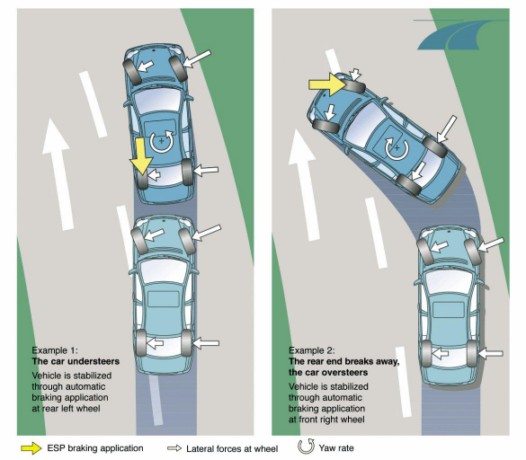 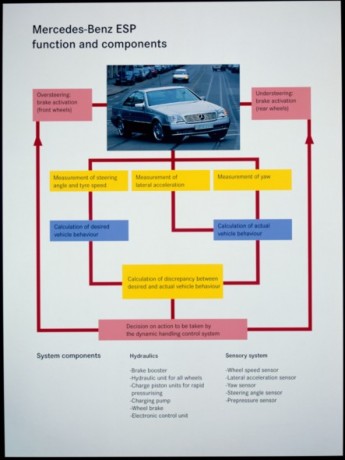 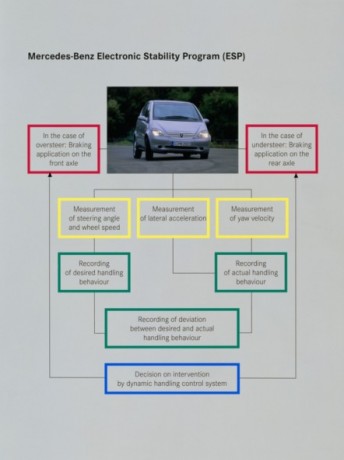 Sensors early detect the swerve of the car`s rear or the actual danger of swerving and brake the wheels in diagonal order to bring the car back to the “right” direction. Since 1994, Mercedes-Benz has been making a key contribution to improving safety out on the road with its active driving safety system, the ESP® Electronic Stability Program.
The standard ESP® system governs the brake forces acting on the front and rear wheels in such a way as to reduce the risk of skidding and to help the driver to keep things better under control in critical situations.
The system consolidates the technology of the anti-lock braking and the acceleration skid control systems with a whole series of additional sensors which are needed primarily to calculate the degree of vehicle skidding/yaw motion.
While the car is being driven, the ESP® computer constantly compares the actual vehicle handling variables with the computed target values. If the car deviates too far from the safe “ideal line”, the system intervenes in a split-second and follows a specially developed logic to correct the car’s course using two different methods: precision application of the brakes at one or more wheels and/or reduction of the engine torque.
ESP® can correct both driver errors and as well as skidding induced by slippery or wet surfaces, loose chippings or other adverse road surface conditions, where motorists would otherwise have very little chance of correcting the vehicle’s course by steering or braking.
Tags
esp

I dont dare to jump on the bandwagon yet!

Merry christmas to you all!