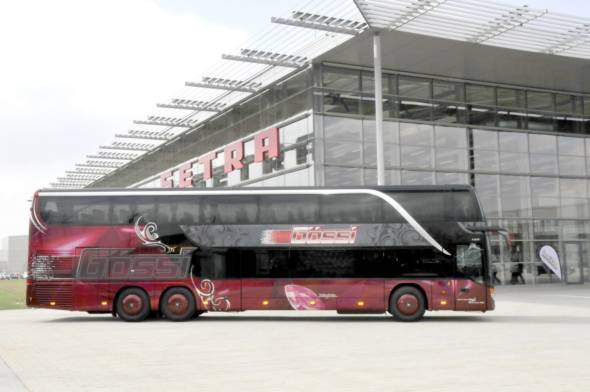 Neu-Ulm / Horw (CH) – High-quality Setra TopClass 400 and ComfortClass 400 touring coaches leave the customer centre of the Daimler premium brand every day. Within this series of individual, comfortable prestige vehicles, however, the touring coaches of the Swiss company Gössi Carreisen, based in Horw on Lake Lucerne, are in a category of their own. In the words of Marco Gössi, managing director and son of the company’s founder, “we now promote the image of our company exclusively on the bus itself. We no longer resort to any other form of traditional advertising to publicise our company.”

Lothar Holder, head of sales of Setra buses at EvoBus GmbH: “Gössi’s decision to use our designs to promote its image on its touring coaches confirms the competence and creativity of the staff at our design centre in Neu-Ulm.”

Customised design for buses from the design centre

Marco Gössi is clearly most satisfied with the high-quality realisation of his ideas and sketches by the Setra design centre in Neu-Ulm: “This increasingly allows us to develop our own brand philosophy.” Use of the corporate advertising budget, therefore, is targeted at the company’s conspicuous touring coaches. And that’s saying something, because the cost of the customised paintwork amounts to anything up to 50,000 euros per vehicle. At the same time, this advertising creates a close bond with Gössi’s travelling customers, who have taken the company’s strikingly painted touring coaches to their hearts.

This is also evidenced by the fact that there is always a large group of passengers in attendance each time a new vehicle is picked up from Neu-Ulm. The relationship between the Gössi family and its customers has perceptibly grown through this close association with the subject of touring coach and bus comfort. And the next trip to Ulm for Gössi’s customers is already in the pipeline, because the middle of the year is the scheduled delivery date for the next Setra, an S 416 HDH, which will be used as a team bus for the ice hockey professionals of EV Zug.

Gössi Carreisen AG was founded in April 1975 in Horw (in the canton of Lucerne) by Xaver Gössi, who had previously worked as a bus driver. It all began with a used bus, with the first Setra being purchased in 1979. Today, Gössi is one of the best-known bus tour operators in Switzerland and has evolved into a “Europe specialist” (slogan: “Gössi – Experience Europe”). The company operates 17 touring coaches, including 15 Setra double-decker and high-deck coaches of model series 300 and 400, which are on the road all year round on organised tours as well as over 300 company-run holiday trips for loyal and satisfied customers from across central Switzerland. One of the top favourites with customers is the annual 17-day trip to the North Cape (in a Setra S 431 DT, of course) via Oslo and the Lofoten Islands with return via Helsinki and Stockholm.

Yet the specialist tour operator is also active in the regular-service sector of the travel market: during the winter season, Gössi runs a regular scheduled service to St. Moritz in the Swiss Alps for ski tourists from around the world who land at Zurich international airport.

Out into the big wide world with the Unimog