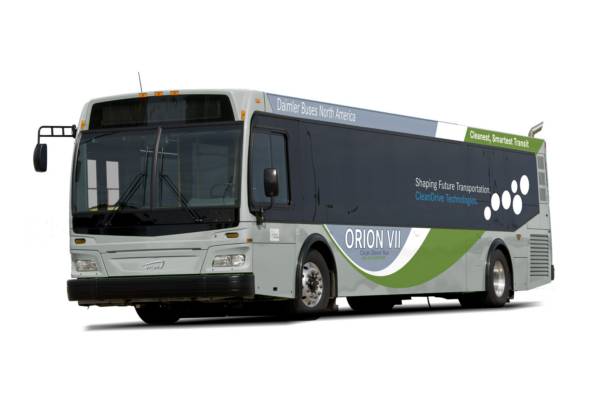 Cleveland, Ohio – Daimler Buses North America (DBNA) unveiled the new-generation Orion VII transit bus at the Bus & Paratransit Conference in Cleveland, Ohio. Sales of the all-new Orion VII have already commenced in the U.S. and DBNA has received the first orders for the vehicle. The bus is manufactured at the plants in Mississauga, Canada, and Oriskany, New York.

“We are fortunate to have been able to utilize Daimler’s worldwide engineering resources in helping us prepare for EPA 2010 emission standards,” says Richard Ferguson, President and CEO of Daimler Buses North America. “We have taken these concepts and adapted them to the new Orion VII transit bus.”

Daimler Buses put a total of seven test buses through comprehensive durability testing. The buses were subjected to 60 test cycles and logged approximately 500,000 miles mimicking real-life driving conditions. “It is absolutely crucial that we go above and beyond in our testing before the updated Orion VII transit bus begins making its way to our customers’ operations,” says Ferguson. “The goal of this testing is to ensure that the Orion VII remains the most reliable and durable bus on the market.”

The new generation Orion VII is available with diesel, hybrid and natural gas (CNG) drives. The three drive versions feature almost identical engine compartments so that components and harnesses could be standardized across all three applications providing ease of maintenance for the end user. The design of the Orion VII has been improved in a number of ways, particularly with a view to accommodating customer preferences. Through improved sound proofing, noise has been reduced both inside and outside the bus.