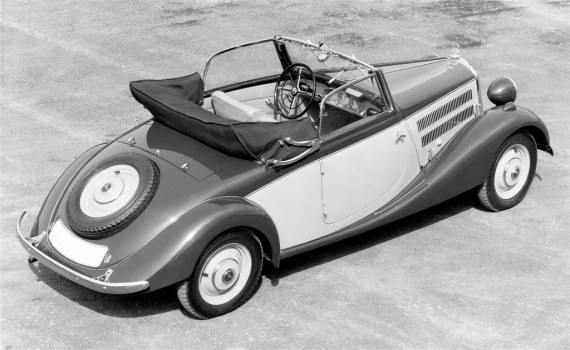 Two compact Mercedes-Benz models  the 170 V and 170 H  were introduced at the International Automobile and Motorcycle Show in February 1936. The 170 V (W 136) series rapidly continued the success story of its predecessor, the 170 small wonder considering the fact that the latters design had been regarded as sound and matured. As many as 71,973 units had been produced of the passenger car version, plus 989 panel vans, by November 1942. With this volume, the 170 V was by far the best-selling pre-war passenger car model, securing a top ranking in the mid-sized car class for the Mercedes-Benz brand. Shortly after the market launch in March 1936, monthly production of the new four-cylinder model reached the 1,900 unit mark a volume hardly anyone would have expected from the Mercedes-Benz brand just a little earlier.
The 170 H (W 28 series) had the same engine which, however, was accommodated in the rear, as on the 130 model before it. Although the handling characteristics of the 170 H were clearly more balanced than those of the 130, it remained a specialty in the 1930s car market with a correspondingly low production volume of 1,507 units.

Development of the 170 V began in 1933. The aim was to build an even less expensive and even more advanced mid-sized car than the 170 (W 15) with six-cylinder engine presented in 1931. The V in the model designation stands for front-mounted engine (vorn = German for front). The backbone of the new model was the X-shaped oval tubular frame designed in accordance with a patent granted to design engineer Max Wagner. Despite its longer wheelbase, this frame was some 50 kilograms lighter and also stiffer than the box-section frame used for the 170. The M 136 engine was developed from the 1.3 liter unit of the rear-engined 130. It had initially been given a displacement of 1.6 liters and tested in this configuration. Shortly before production startup, however, it was decided to raise displacement to 1.7 liters primarily to boost torque.

The 38 hp engine with vertical valves and updraft carburetor was not exactly a sporty power plant. However, it proved to be a reliable engine for everyday use, one that was particularly praised for its smooth running characteristics. Even in the unforeseen extremely arduous wartime operation in the 170 VK jeep-like Kbelwagen, this engine demonstrated its proverbial undemanding reliability and durability.

As early as its market launch in March 1936, the 170 V was available with an abundance of bodywork variants that would be hardly conceivable today. There were sedans with two or four doors, a convertible sedan, an open tourer with two doors, a convertible B and a two-seater roadster. As was customary at the time, chassis to be completed by bodywork by third-party companies or by purpose-built bodies were also on offer. As early as May that year, the range of bodywork versions was complemented by the addition of the dynamic and elegant convertible A which, at a price of 5,980 Reichsmark, became the most exclusive version of the 170 V. From September, a panel van version was available with wider rims and tires in size 5.50 x 16. The 170 V also served as the basis for a number of competitive vehicles. Two other variants were the jeep-like Kabelwagen versions for the police and the army. And finally, a version with wood gas carburetor was made available when fuel became scarce from 1939.

After the end of the war, the 170 V continued where it had left off before the war, serving as the model with which production was resumed. It remained the only passenger car model in the Mercedes-Benz lineup until 1949, and the 170 series expanded continuously from 1949 formed the backbone of passenger car production at Daimler-Benz until this series was discontinued in September 1955.

The 170 H was not nearly as successful. It was more expensive, a little noisier and less practical than the 170 V but also more exclusive. At any rate, it can take credit, together with the other rear-engined models 130 and 150, for being an example of technical innovation in the 1930s. After World War II, it even experienced a heyday on account of its rear-mounted engine. Since it had been difficult to fit the wood gas carburetor system to this model, the 170 H had been ignored by the German army with the result that there were a few units in very good condition available after 1945. The prestige value and the price of the 170 H rose accordingly but the boom period did not last long. Few cars were spared the rigors of operation in those days, and virtually all 170 H units disappeared from the roads after a few arduous years. Today, the 170 H is greater rarity than a prestigious supercharged convertible.

The new generation of the Mercedes-Benz SL-Class: Synergy of dynamism and emotion