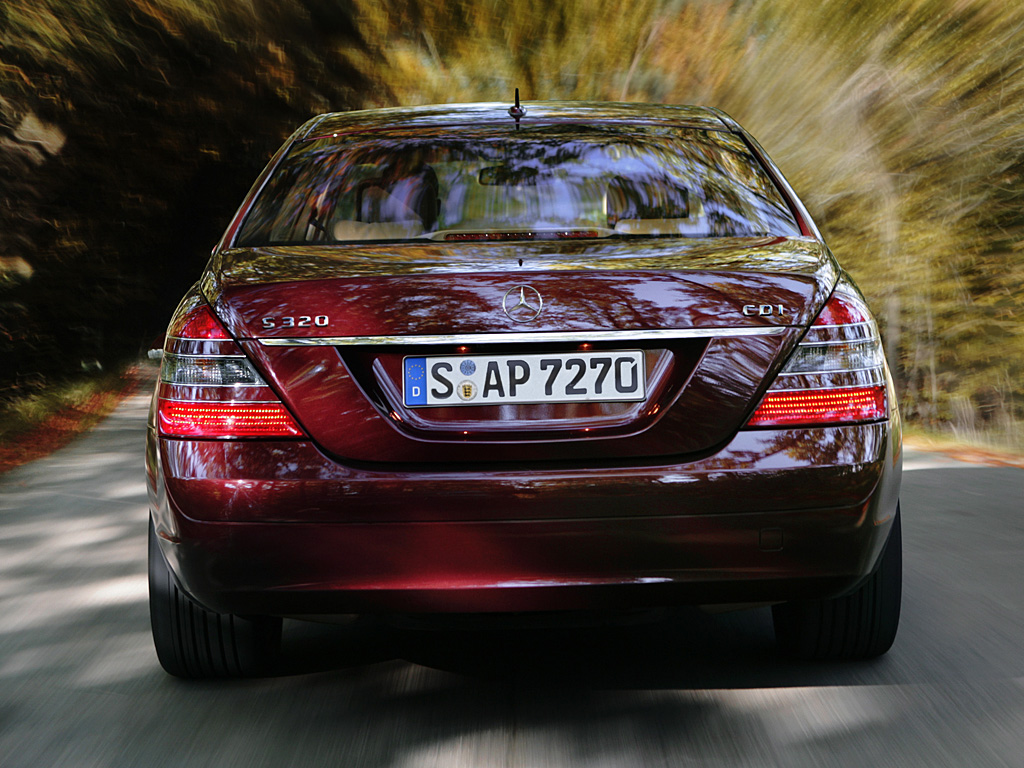 STUTTGART, Germany — Mercedes-Benz probably didn’t have the geek set in mind when it designed its new flagship 2007 S-Class sedan. But when the luxury car hits U.S. streets in February, it’ll be packing a bundle of electronics that would make David Hasselhoff green with envy.

An onboard radar system, automated acceleration and braking controls, and a night-vision display are among the features that Mercedes describes as the most advanced available in cars today.

To test that claim, Wired News took the smart sedan for a test drive up and down the German autobahn near Mercedes’ head office here. The car’s intelligence was immediately apparent, most dramatically displayed in the new Distronic Plus cruise control, a system that automatically maintains a set distance between you and cars in front.

The Distronic system’s 24-GHz radar sensors initiate the car’s acceleration and braking according to a preset speed and distance from a car in front of you. While creeping along in stop-and-go traffic, I didn’t have to apply either the brake or gas.

While distance control is not new, the S-Class is the first model that can maintain distances between cars at a set speed until the vehicle’s automated control slows it down to 0 mph, or up to speeds of 125 mph. Previously, the S-Class’ cruise control shut off when the car reached speeds below 19 mph or higher than 113 mph.

The function took some getting used to. After setting the system to maintain a distance of about 170 feet from cars in front of me, it took a lot of nerve not to apply the brake manually when I was humming along at over 90 mph and saw that traffic had come to a dead stop just a few hundred feet away. But in time I learned to trust the Distronic system enough to force myself to keep my feet flat on the floor while the car gently decelerated from high speeds to a dead stop — without plowing into the car ahead of me.

When traffic was snarled, the more indulgent aspects of the car’s engineering came to the fore. Mercedes’ engineers obviously put a lot of effort into designing the ergonomics of the seat, and extended the comfort features to include a selection of back massages. Seven air chambers in the cushion deflate and inflate according to whether you select a light or more vigorous massage using the car’s display console.

The seat is also controlled by the S-Class’ new braking technology, which uses piezo valves to inflate air pockets if an impending crash or skidding is detected by the car’s radar sensors. Air bag deployment is accelerated and the windows and the sunroof are automatically closed as the seat belts tighten.
The new S-Class also marks the debut of Mercedes’ night-vision drive system, which relies on an infrared camera mounted on the windshield to show images of obstacles, people and other objects that are not illuminated by headlights. The night-vision images are projected on a screen just behind the steering wheel, which allows you to see in the dark as far away as 492 feet.

Driving on a dark, country road off the autobahn, this feature proved less earth-shattering than it sounds, but the display offered about the same level of visibility as the car’s high beams.

Of course, the S-Class was replete with the standard fare of electronics that come with luxury cars, including an upgraded GPS navigation system. Sadly, mastering the controls took a while.

While the night-vision system and the Distronic automatic drive display panels were set apart behind the steering wheel and were straightforward to manage, selecting controls like audio, temperature and navigation with the display panel was cumbersome. At one point, I couldn’t figure out how to control my seat’s massage functions, and kept putting the passenger seat in massage mode instead. That said, the menu system was no more challenging than those of other recently launched luxury-grade cars from Audi, BMW and Jaguar.

And when I wearied of tinkering with the user interface, it was nice to be able to pull into a free passing lane for a liberating burst of speed and acceleration, powered by the S550’s eight-cylinder engine, which can take the car from 0 to 60 mph in 5.4 seconds.

The new S-Class can set you back as much as $100,000 when it goes on sale in the United States. But the vehicle’s gadgetry could eventually trickle down into the more-affordable car segment in a few years — like the first navigation systems did after initially showing up in luxury sedans.

If and when features like Mercedes’ Distronic cruise control or night-vision systems become must-haves in other luxury car models, it might be only a matter of time before similar electronics find their way into Ford or Dodge vehicles. But the wait will be long, and painfully devoid of pneumatic back massages.

In keeping with tradition: Two compact