THE Mercedes-Benz thrashed by F1 “hoon” Lewis Hamilton is expected to be snapped up at auction today.

A buyer frenzy has erupted between cashed-up Formula One enthusiasts and local Mercedes-Benz dealers keen to nab the notorious Mercedes.

Hamilton made global headlines when he was caught doing doughnuts in St Kilda late on Friday. 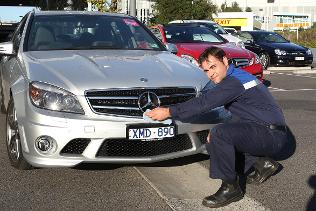 The powerful V8 was impounded and the red-faced British race driver was charged with improper use of a vehicle.

The car has done about 5000km, of which Hamilton clocked up about 100km.

Mercedes-Benz Australia is auctioning the car to one of its dealers at lunch-time.

Mercedes spokesman David McCarthy said the car was expected to sell for considerably more than its $150,000 retail price.

“There has been a lot of interest,” he said.

Mercedes will not reveal the lucky bidder, nor will it put a plaque on the car saying it was driven by Hamilton.

Mr McCarthy said any money made above the retail price would go to the Alannah and Madeline Foundation.

The Exclusive BRABUS Program for the Mercedes E-Class Cabriolet