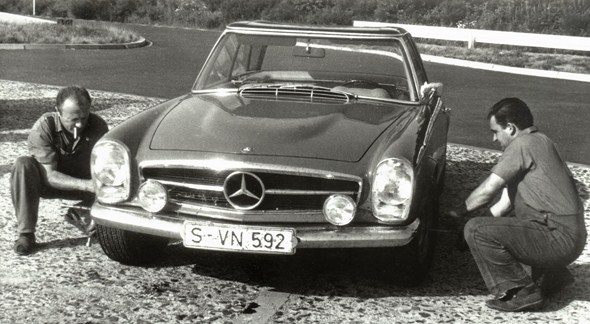 Only the prestige saloon Mercedes-Benz 600 (W 100) was equipped with a 6.3-litre V8 with an output of 250 hp (184 kW) and a torque of 500 newton metres. A test by the magazine “auto motor und sport” in No. 14, 1967, comparing the 250 SE with the 300 SE therefore concluded, “Unlike Opel, Daimler-Benz does not have a big brother in the USA who builds eight-cylinders in mass production and who can therefore supply accordingly. 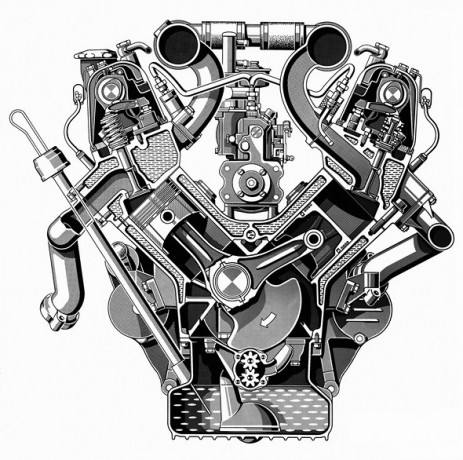 Daimler-Benz does have a state-of-the-art eight-cylinder design which leads a respectable life in the 600 behind closed doors as it were, but it is hard to understand why a smaller-displacement version of this engine has not long since been installed in the intermediate range saloon.

The 3-litre six-cylinder is only one desperate step on the way to creating more flexible and quieter engines. There is reason to expect the eight-cylinder will soon be making its appearance. This should not be asking too much of Germany’s most renowned automobile manufacturers at a time when Ford comes home victorious from Le Mans using simple mass-produced eight-cylinder engines”. 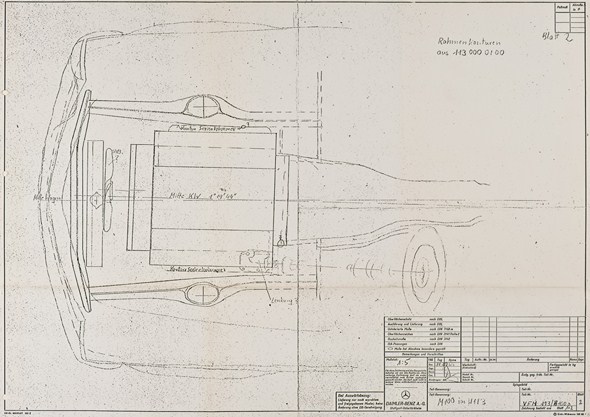 In addition, in a talk with Rudolf Uhlenhaut, the head of Passenger Car Development, and research engineer Erich Waxenberger, editor-in-chief Heinz-Ulrich Wieselmann found fault with the inadequate power output of the Mercedes-Benz passenger car engines of that time – a remark that gave Waxenberger no peace.

He sent his mechanic Hermann Eger to Sindelfingen to search for a body for a powerful test car. He returned immediately with a coupé bodyshell. 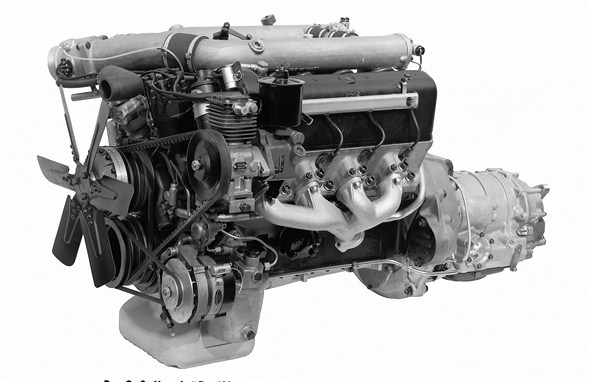 The 6.3-litre V8 engine M 100 was installed in it. Waxenberger enjoyed the first test drive that evening at the factory premises.

But the next morning he was called to Uhlenhaut to explain to his boss what that vehicle was that drove past his office window the evening before with such a striking engine sound. And so the legendary Mercedes-Benz 300 SEL 6.3 (W 109) was born. It came out in 1967 and was the most powerful series-produced saloon in the world in its day. 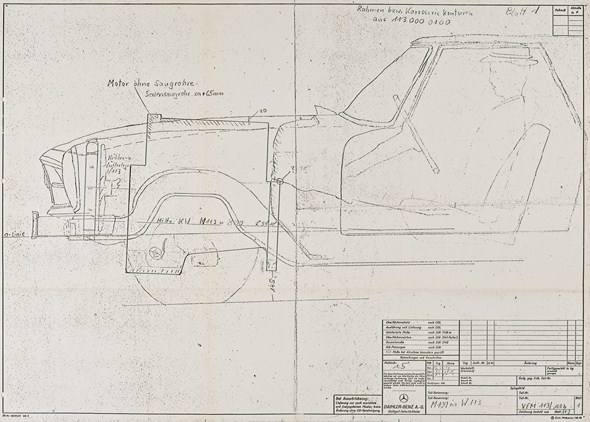 But the development did not stop there. Waxenberger also implanted the V8 engine in the SL of the W 113 series, the “Pagoda”. But this proved to be more difficult than installing the engine in the saloon as the engine compartment of the SL was appreciably smaller.

Extensive welding and relocating work had to be done on the frame to fit the great length and width of the eight-cylinder engine into the car. From the outside, this special “Pagoda” could only be recognised by the wider bulge on the bonnet, the “powerdome”, which truly deserved its name in this case.

Between 3 and 5 July 1967, a convoy of three V8 cars drove to the Nürburgring to carry out road tests supervised by Erich Waxenberger. The trio consisted of two saloon models from the W 108 series and an SL from the W 113 series. 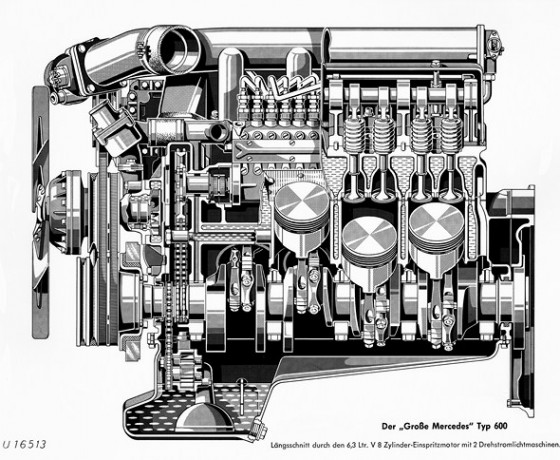 The two saloons had M 100 pilot production engines, still with a displacement of 6 litres; one of them had had the output of its engine increased to 350 hp (257 kW) and featured air suspension; both had five-speed transmissions from Zahnradfabrik Friedrichshafen (ZF, gear factory). The SL had the M 100 engine with the subsequent standard displacement of 6.3-litres as well as automatic transmission and steel springs.

Waxenberger clocked the best lap times in the SL. They were between 10 minutes 40 seconds and 11 minutes 6 seconds and were achieved by using 5.50 M 14 Dunlop racing tyres and more firmly adjusted shock absorbers.

However, despite a large rear wheel camber (minus 4 degrees 30 minutes to minus 5 degrees, depending on adjustment) he criticised the severe instability when braking before bends, which he described as a spin effect – a problem which on the other hand was not just limited to the V8 “Pagoda”. 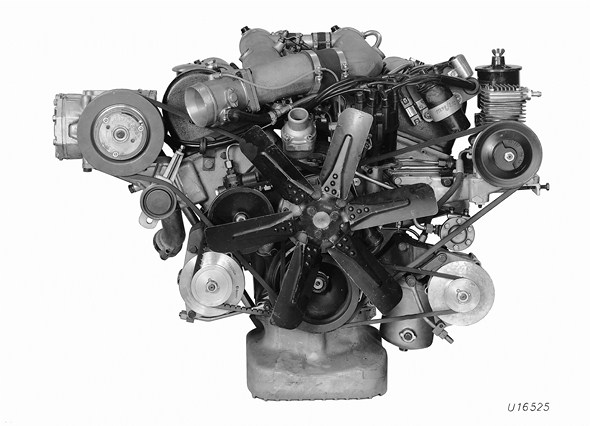 It was also familiar from the production cars 250 SL and 280 SL with six-cylinder engines. To remedy the problem, a braking torque support on the rear axle was proposed, but never installed.

After nine laps on the north loop, the front tyres were worn out; the rear tyres needed 16 laps. The test report tersely notes that this data is invalid because tuning and adjustments had repeatedly been carried out on the vehicle in between. 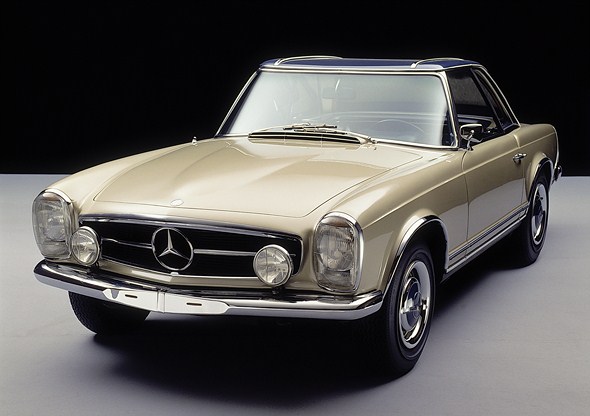 Despite this promising debut, the development of the powerful SL was not continued to the production stage. The test prototype was scrapped by the factory. The first SL to be sold with eight-cylinder engines would take until the coming of the next Mercedes-Benz SL, the R 107 series, in spring 1971. 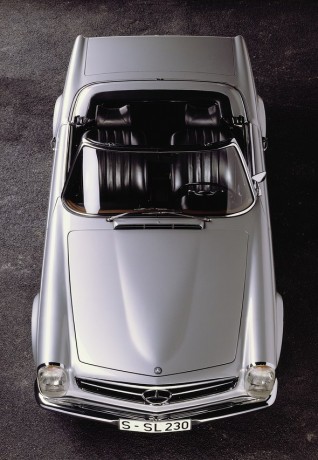 Stuttgart – The Mercedes-Benz SL, W 113 series, launched in 1963, was the first sports car in the world with a safety body. It was designed so that the area impacted upon – both at the front and at the rear – would deform, thus reducing or completely dissipating the kinetic energy in the corresponding area.

The vehicle interior, the actual passenger compartment, on the other hand, was designed to be rigid in order to act as a safety cell for the vehicle occupants. The safety body also contributed to the protection of other road users, which was an explicit development goal for Mercedes-Benz: it also absorbs a part of the kinetic energy for the other – insufficiently protected – road user involved in an accident. 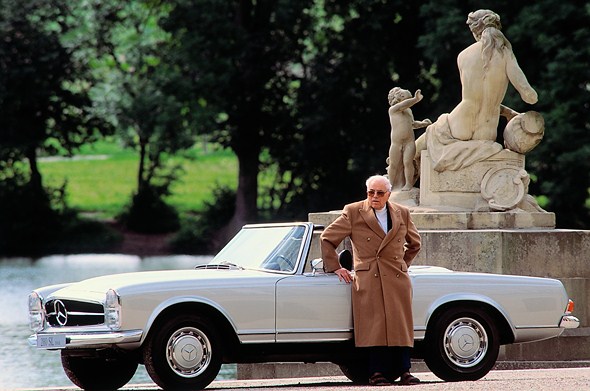 The issue of the improvement of passive safety had been hanging in the air for quite some time. At Mercedes-Benz it was promoted by engineer Béla Barényi, considered the father of the vehicle safety body. In order to test how the safety body responded, the first simulated crash test was carried out in Sindelfingen with a test car of the W 110/4 series on 10 September 1959 as a crash against a stationary obstacle.

At that time the first vehicle built according to the new bodywork concept was already on the market: the W 111 series, presented to the press on 1 August 1959 with its six-cylinder models 220, 220 S and 220 SE.

This had consequences for the W 113 series SL because its dimensional concept had already been laid down in October 1958. At the same time a decision was made in favour of Barényi’s safety body. The previous plan – to add a more powerful-engined and cultivated variant alongside the Mercedes-Benz 190 SL (W 121 I series) by equipping it with the six-cylinder engine from the 220 (W 111) saloon – was abandoned at this point. 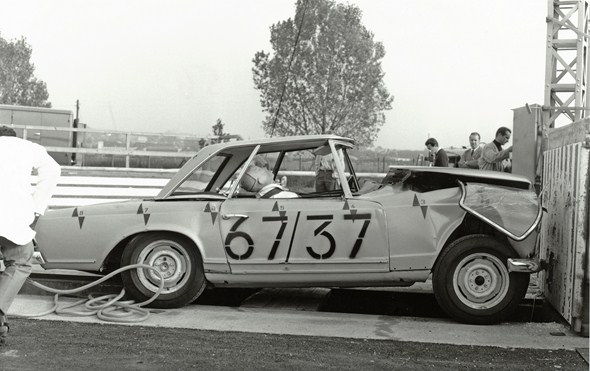 As the floor assembly for the new mid and executive-class cars ranging from 190 D (W 110 series) to 300 SE (W 112/3 series) was already based on the principle of the safety body, the same floor assembly was used for the W 113 series of the SL, which was being developed at the same time. 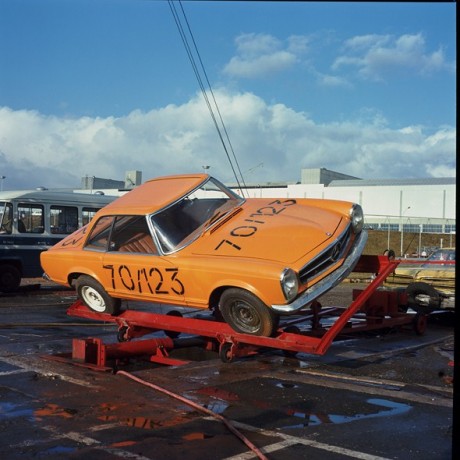 Although Barényi’s reflections were spelled out in a patent, they were not at the time as well-founded and confirmed as they were later to be by a series of crash tests. The accident test carried out with the W 110/4 mentioned above remained the only test in 1959. 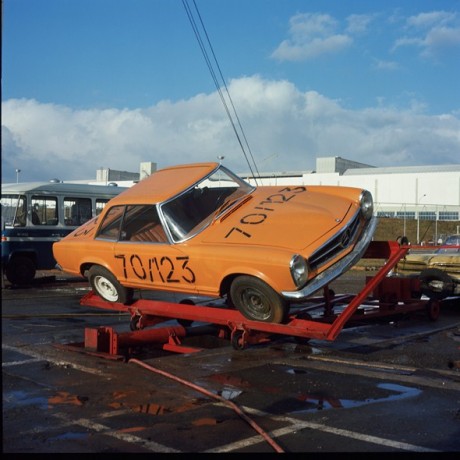 In 1960, the tests were expanded and also included roll-over tests. With them it was possible to demonstrate in practice the basic demands for the greatest possible rigidity of the passenger compartment against impact from any arbitrary direction, and the assigning of limited rigidity to the front and rear sections with the object of reducing the violence of the impact through their planned, energy-consuming deformation. 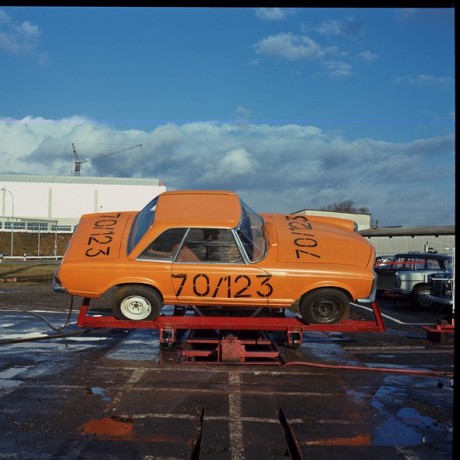 With the W 113 series of the SL, the concept was applied to a sports car for the first time; at the same time, the steering gear was moved back to the firewall, the steering column yielded to axial compression and additionally featured a joint to prevent the feared lance effect, there was an impact plate on the steering wheel, and later, in the 250 SL launched in 1966, an impact absorber was featured. 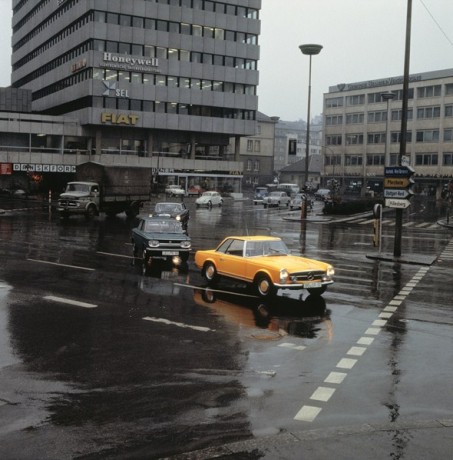 These safety features were not offered by any other vehicle of this category anywhere in the world. The same is true for the elimination of hard corners and edges on control buttons and knobs on the dashboard, with its padded upper and lower edges, and the recessed door handles.

With each of the following SL generations, the issue of safety has been raised to new, exemplary levels. For example, series R 129 (1989 to 2001) set impressive standards with its sophisticated safety concept for an open-top sports car, including among other things a roll-over bar, which can be deployed to protect occupants within just 0.3 seconds in the event of the imminent danger of the vehicle overturning. 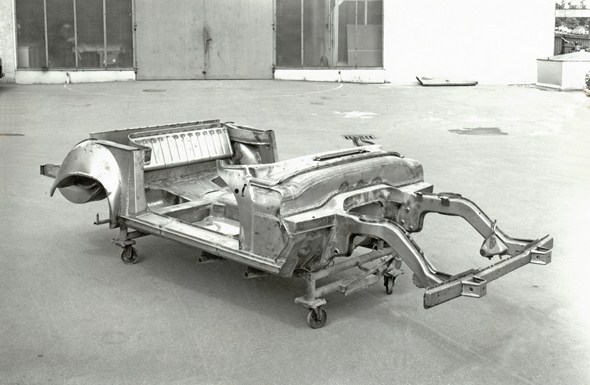 In 1998, the Mercedes-Benz SL, R 129 series, provided a glimpse at the future of steering