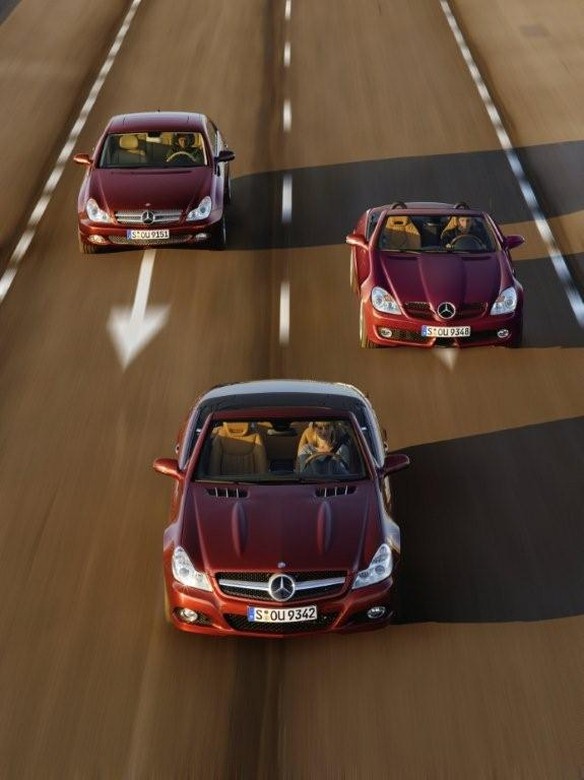 Mercedes-Benz is continuing its commitment to further reductions in fuel consumption and exhaust emissions with new products in five model series which will take the stage at this years Geneva Motor Show. Despite their outstanding levels of safety, comfort and refinement, the new coupes and roadsters consume up to 10 percent less fuel than their predecessors.
At the pinnacle of the new Mercedes dream machines celebrating their public premiere in Geneva is the SL-Class. Mercedes-Benz has refined, improved and developed the roadster further to a level of detail and extent that goes well beyond a mere model facelift. The result is a car that combines sportiness, safety and comfort into a synthesis unrivalled in this vehicle class, offering Mercedes driving refinement at sports car level.
The new, decidedly sporty and assured exterior design reflects the handling characteristics of this Mercedes roadster, which is now even more agile with a new direct-steer system while offering even more safety and comfort. Two new six-cylinder engines will round off the SL range from spring 2008: the SL 280 develops 170 kW/ 231 hp and provides an attractive entry into the SL sports car world. The SL 350 is powered by a newly developed and particularly lively sports engine. Output has increased by 16 percent to 232 kW/316 hp compared to the previous 3.5-litre engine, while maximum torque has improved by 10 Nm to 360 newton metres. This powerpack accelerates the new SL 350 from standstill to 100 km/h in just 6.2 seconds, making it 0.4 seconds faster than the previous SL 350. More output does not mean higher fuel consumption for this sports car, however: at 9.9 litres per 100 kilometres, the SL 350 is 0.4 litres more economical (NEDC) than the preceding model with 200 kW/272 hp.
The flagship models in this series continue to be the SL 500 with a V8 engine and the twelve-cylinder SL 600. Their engines consume up to 0.4 litres less fuel per 100 kilometres than before.

The SL consolidates its substantial lead in the field of safety with bi-xenon headlamps and the optional Intelligent Light System, whose lighting functions are designed for typical driving situations. One new onboard feature is the AIRSCARF neck-level heating system invented and patented by Mercedes-Benz. This optional system improves comfort when driving with the top down, and is able to extend the roadster season into the cooler months of the year.
The front-end design of the SL-Class shows that Mercedes-Benz has enhanced the sporty attributes of the roadster even further. The centrepiece is a wide and therefore very imposing radiator grille, whose arrow shape symbolises virtues such as go-getting performance potential. A horizontal louvre adds visual width to the radiator grille and thereby reinforces the muscular appearance of the SLs front end, which consequently seems surprisingly new yet very familiar. 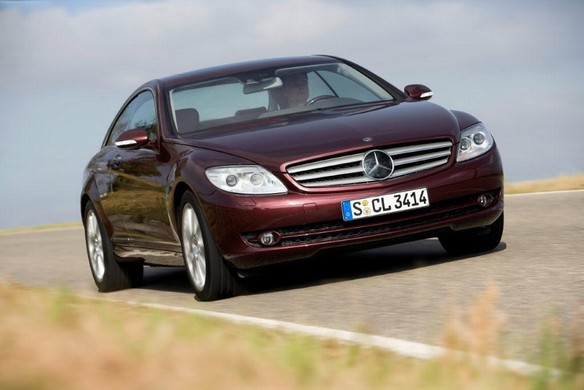 SLK: even more driving pleasure with considerably lower fuel consumption
Following a comprehensive model facelift, the Mercedes-Benz SLK is now even more dynamic and provides an even more emotional driving experience. The most important visual changes include a redesigned front and rear end, as well as a carefully modified interior with a new instrument cluster and three-spoke sports steering wheel. Mercedes-Benz also installs the V6 sports engine from the SL-Class in the new SLK 350, where it develops an output of 224 kW/305 hp at 6500 rpm ‑ 24 kW/33 hp more than the six-cylinder unit in the previous SLK 350. Torque has also been increased by 10 Nm, and is now 360 newton metres at 4900 rpm.

Despite this higher output and very good performance figures, the fuel consumption of the SLK 350 has been significantly reduced. Its combined consumption with the six-speed manual transmission is now only 9.5 litres per 100 kilometres, which represents a remarkable reduction in fuel consumption by 1.1 litres per 100 kilometres.
In addition to the SLK 350, the four-cylinder model SLK 200 KOMPRESSOR and the six-cylinder SLK 280 remain available in this compact Mercedes roadster range: the output of the supercharged four-cylinder engine has increased by 15 kW/21 hp to 135 kW/184 hp, while fuel consumption has been lowered by one litre to 7.7 litres per 100 kilometres. The NEDC fuel consumption of the SLK 280 (170 kW/231 hp) has been reduced by 0.4 litres to 9.3 litres per 100 kilometres. The SLK 55 AMG continues to be powered by the familiar 5.5-litre V8 engine developing 265 kW/360 hp.
The designers have given an even more sporty touch to the visual appearance of this cult two-seater. One eye-catching feature is the newly designed front bumper, which now has differently distributed cooling air apertures and a more pronounced arrow shape. The rear end has also been restyled; the diffuser-look lower section now makes the roadster appear even more muscular from the rear. Trapezoidal exhaust tailpipes and dark-tinted tail lights do even more to accentuate this impression. The exterior mirrors now have LED indicator repeaters with a pronounced arrow shape, and also have a larger lens area.

CLC: new Sports Coupe with CDI engines in the five-litre consumption class
With the new CLC, Mercedes-Benz is presenting a distinctive model series at the Geneva Motor Show which provides an attractive entry into the Coupe family of the Stuttgartbrand. Compared to the previous Sports Coupe, Mercedes engineers have newly developed or improved more than 1100 components.
Compact body dimensions and powerful proportions underline the sporty appearance of the new CLC. The front and rear ends have been completely newly designed. With its striking coupe radiator grille, which has a large Mercedes star at its centre, as well as the new projection-beam headlamps, the Sports Coupe follows the modern Mercedes design idiom. The large, newly designed boot lid conceals a variable luggage compartment with a capacity of up to 1100 litres. The new tail lights, the long row of LEDs forming the third brake light and the rear bumper subdivide the rear end and accentuate its width.
The interior of the new Mercedes-Benz CLC is akin to a modern bespoke suit – precisely fitting and comfortable. Sports seats with further improved lateral support, a three-spoke multifunction steering wheel, automatic climate control and brushed aluminium trim are standard equipment.
Mercedes-Benz has put together a sports package for drivers with particularly sporty leanings. This includes exclusive technical innovations and extras such as 18-inch light-alloy wheels, wide-base tyres, headlamps with a black-tinted interior frame, a lowered sports suspension, a leather sports steering wheel and tinted aluminium trim. Another special feature the CLC that has been adopted from racing sports cars is the instrument cluster, which has red needles in the speedometer and rev counter. When the ignition is switched on, both needles spin right around the scale once then return to their starting position.
Another standard feature of the sports package is the new direct-steer system, which further enhances the agile handling of the CLC and represents a major safety benefit. This new development is based on the speed-sensitive steering system, and also has an additional, variable rack ratio which responds to the steering angle.
The new CLC is available with a choice of four four-cylinder and two six-cylinder engines developing outputs from 90 kW/122 hp to 200 kW/272 hp. With its
up-to-date turbodiesel engines, the Sports Coupe is right at home in the five litre fuel consumption category: the CLC 200 CDI is happy with 5.8 to 6.1 litres per 100 kilometres (NEDC), i.e. up to 10.8 percent less than the preceding model. The CDI models are capable of a range exceeding 1000 kilometres with one tankful (62 litres). The 135 kW/184 hp power unit of the CLC 200 KOMPRESSOR now has 15 kW/20 hp more output, and consumes only 7.8 to 8.2 litres per 100 kilometres (NEDC) – up to 0.7 litres less than before.

CLS: new six-cylinder engine and fine-tuning to the last detail
The unique, four-door CLS Coupe – which pioneered a new automotive segment – has also been made more attractive than ever by specific fine-tuning. The front aspect is dominated by a modified radiator grille, which now has two rather than the previous four louvres. The exterior mirrors also have a new shape, with integrated, arrow-shaped LED indicator repeaters and more than 30 percent larger lenses. The tail lights are now also in LED technology: the brake lights, rear lights and indicators feature particularly fast-responding light-emitting diodes.
Great attention to detail has also been lavished on the updated interior: a newly designed leather steering wheel with three spokes and multifunction buttons is part of the package, as is a new-look instrument cluster, whose white dial faces form an attractive contrast to the structured surface of the backplate. New chestnut wood inserts replace the previous trim.
Like the SL, SLK and CLC, the CLS benefits from new-generation infotainment systems. These high-performance units combine ease of operation and intuitive menus with perfect entertainment. Features include speed-sensitive volume control, a keypad for entering telephone numbers and radio frequencies, an MP3-capable CD and DVD player and a Bluetooth interface which wirelessly connects a mobile phone with the onboard hands-free system. Audio 20, Audio 20 CD with CD changer, Audio 50 and Audio 50 APS with DVD changer and the LINGUATRONIC voice-control system now feature a 5-inch colour monitor. COMAND APS has a high-resolution 6.5-inch colour display, LINGUATRONIC for audio, navigation and telephony, a music register for storing audio files and an SD memory card slot.
As the new entry-level model, Mercedes-Benz now offers the CLS 280 with an up-to-date 2996 cc V6 engine, a maximum output of 170 kW/231 hp and a maximum torque of 300 newton metres. Its combined NEDC fuel consumption is 9.8 to 10.0 litres per 100 kilometres. The second V6 petrol model is the CLS 350 CGI. Its advanced six-cylinder engine with piezo-electric direct injection and a spray-guided combustion system develops an output of 215 kW/292 hp and has a convincingly low NEDC fuel consumption of 9.1 to 9.3 litres per 100 kilometres.
The CLS 500 is powered by a V8 engine with a displacement of 5.5 litres and a peak output of 285 kW/388 hp. The CLS 320 CDI with its 165 kW/224 hp V6 diesel engine above all excels with its high torque of 540 newton metres, accompanied by a low diesel fuel consumption of 7.6 to 8.1 litres per 100 kilometres. All CLS models are equipped with the 7G-TRONIC seven-speed automatic transmission as standard. 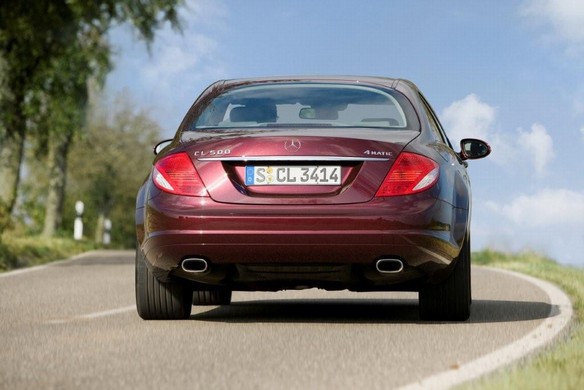 CL: permanent all-wheel drive with no fuel penalty
The Mercedes Coupe family continues to be headed by the luxurious CL-Class, which offers the widest model range in this vehicle class with the CL 500, CL 600, CL 63 AMG and CL 65 AMG. In addition Mercedes-Benz will be entering the lists with the new CL 500 4MATIC with permanent all-wheel drive from summer 2008. This two-door model is equipped with a 285 kW/388 hp V8 engine, and in addition to 4MATIC it features innovations such as the Intelligent Light System and the preventive occupant protection system PRE-SAFE as standard.
Mercedes-Benz has further improved this all-wheel drive system, and uses the latest-generation system in the CL 500 4MATIC – the one that has already proved successful in the S-Class. 4MATIC is permanently active and therefore requires no response time to assist the driver in infavourable weather and driving conditions. As a result, critical situations can be mastered better and more confidently.
With a weight of just 70 kilograms, the newly-developed 4MATIC is the lightest drive system of its kind. The combined NEDC fuel consumption of the CL 500 4MATIC is 12.1 litres per 100 kilometres, which puts it at the same level as the CL 500 with rear-wheel drive another advantage of the new, highly efficient Mercedes all-wheel drive system. The CL 500 4MATIC requires just 5.4 seconds to accelerate from zero to 100 km/h, and reaches an electronically limited top speed of 250 km/h.

The sportiest SL-Class ever