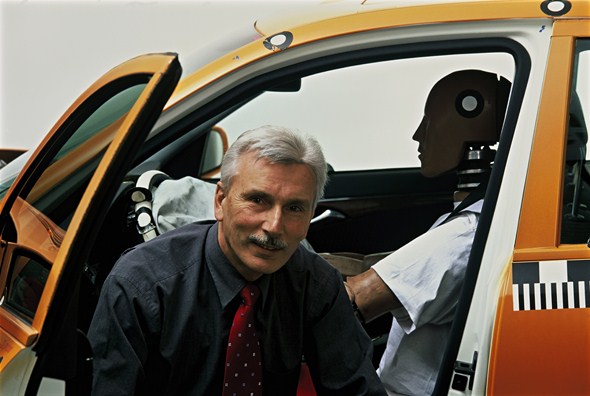 The work of engineer Karl-Heinz Baumann has made a lasting contribution to the safety features of many vehicles produced by Mercedes-Benz Cars. His long list of inventions and innovations includes the automatic rollbar, PRE-SAFE® preventive passenger protection system and ESF 2009 Experimental Safety Vehicle.

Karl-Heinz Baumann is one of those design engineers who perfectly integrates theory and practice into both profession and calling. Born in Villingen on 11 May 1951, Baumann first undertook a toolmaking apprenticeship from 1966 to 1969.

After achieving university matriculation, he followed a course of studies in mechanical engineering with process and production technology from 1974 to 1977, graduating with a university degree in engineering. He went on to supplement these studies at the University of Constance and the Schweißtechnische Lehranstalt in Mannheim (college of welding engineering), where he gained a qualification as a welding engineer.

Now properly equipped in both theory and practice, he started work at Daimler-Benz AG in May 1977 developing passenger car bodies for crashworthiness – a field that would become a specialism for the rest of his working life.

Baumann regularly initiated distinctive new approaches throughout his career. One of his most outstanding innovations was without doubt the rollover-protected convertible, realised for the first time in the SL from the R 129 series.

This set new standards industry-wide: the automatically extending rollbar, designed under Baumann’s leadership, heralded the new era of safe open-top driving. But the concept of the ellipsoidal firewall in the SLK from the R 170 series also opened up a new dimension of crash safety for short open-top vehicles in this class.

The impact-resistant and rigid passenger cell of the two-seater smart – an absolute world first for this class of vehicle – proved no less of a coup. Other innovations initiated by Baumann include the panoramic glass roof for the R 129 series, which in modified form also found its way into series production, and the sandwich-type floor of the SL from the R 231 series.

Baumann never focused on unilateral results. He was only satisfied with across-the-board, multifunctional solutions. One result of this approach was the seven-stage safety concept developed in 1997, which saw passenger car safety as a holistic exercise that combined active and passive safety.

In 2003, the National Highway Traffic Safety Administration of America (NHTSA) presented Baumann, as the spiritual father of PRE-SAFE®, with the “U.S. Government Award for Safety Engineering Excellence”.

In 2007, Baumann joined the teaching staff at the Technical University of Dresden, where alongside Professor Rodolfo Schöneburg, Head of Passive Safety and Vehicle Functions at Daimler, he lectures on “the integral safety of passenger cars”.

Baumann attaches great importance to ensuring his experience and knowledge do not become locked away in a personal exclusive domain. One of his priorities is to awaken interest in others in this field of work by sharing his experience with future generations of technicians.

As a keen driver and practising glider pilot, he knows where the dangers and limits lie. Perhaps that explains why Baumann has been so successful and creative in avoiding these by inventing solutions for the benefit of everyone.

Although he retires in spring 2012, his work continues to resonate – many car drivers no doubt owe their lives to the inventiveness and creativity of Karl-Heinz Baumann in the pursuit of vehicle safety. When the new Mercedes-Benz S-Class from the 221 series is presented in 2013, it will include safety features that can largely be traced back to his work.