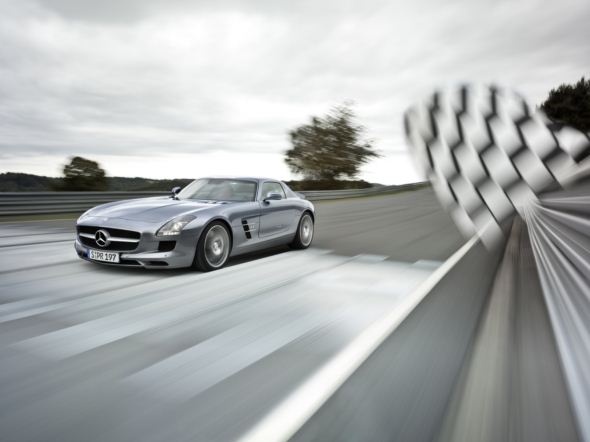 Affalterbach – Victory for the Mercedes-Benz SLS AMG over some strong competition. In the “Sportiest cars of 2010” readers’ poll organised by the renowned car magazine sport auto, the gullwing model took the title in the “super sports” section.

With no less than 17.2 percent of the votes cast, the SLS AMG left all the other  super sports cars trailing in its wake. The win – over 13 competitors from Germany, Italy, Japan, Great Britain, the USA, Sweden and France – underlines just how popular the SLS AMG is amongst the readers.

The very best series-production and performance-tuned vehicles compete against each other on an annual basis in the sport auto readers’ poll; taking part this year were 260 vehicles in 25 categories. A total of 10,000 readers cast their vote. Not only did the super sports car from Mercedes-Benz win over the judges’ hearts – it was also victorious when put to the test. The AMG 6.3-litre V8 front-mid engine with dry sump lubrication and 420 kW (571 hp) plus a torque of 650 newton metres, a seven-speed dual-clutch transmission with a transaxle configuration – not to mention its athletic double-wishbone sports suspension – add up to a unique high-tech blend, ensuring driving dynamics of the highest calibre.

These were very much in evidence at the “super test”, too, which is very highly regarded amongst the sport auto readers and industry experts alike: a lap time of 7.40 minutes on the legendary Nordschleife of the Nürburgring is an impressive performance indeed. “Respect! The Mercedes sports brand AMG has put a magnificent machine on the road” was the reaction following sport auto’s “super test”.