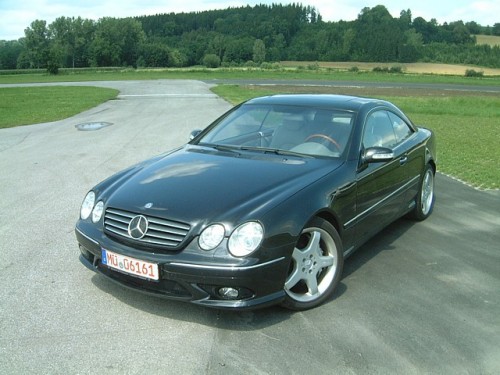 Today was one of those days where I just love my life. I came up to the Benz dealership this morning and the guy I am working under this week tells me that he has a special treat for me. Outside is a used 2003 Mercedes-Benz CL600, yep the one with the 500-horsepower, 800 Nm (590 lb/ft) of torque twin-turbo V12 engine. And guess who could have some serious fun behind the wheel of that baby? ME! :praise:] I didnt have to drive it anywhere, the dealership just allowed me to go take it out and have some fun! Didnt even ask if I could drive it. Damn it I love my life, I really do! :bigsmile:]

This particular CL600 was really hot and sexy looking. It had a Designo (special option, really really really expensive too!) Brilliantblack exterior color as well as 19″ 5-spoke AMG rims and an AMG body kit. Twin mufflers at the rear were standard. The car was pretty well optioned out as well with goodies like a wooden steering wheel, refrigerator in the rear, Distronic and much more. Surprisingly, the first owner also paid extra for the cupholders! :p] Oh yeah, and later I asked what the original price was of this car:  150,000! And now after 2 years and 71,000 km (44,375 miles) its being sold for  74,200.

This would be the first, and probably last, V12 engine I would ever get to drive in my life. Aside from that, the forced induction blew some serious power into this baby so I was expecting something that could break my neck at the push of an accelerator pedal. Oh how I couldnt wait to abuse this thing. I myself was able to get the keys for the car, slap on some red license plates and turn the ignition. The V12 engine purred to life in a very quieted down tone. Nothing remotely sporty or aggressive, just soft and quiet purring. After that, the motor just settled into an extremely quiet and smooth idle. I couldnt hear nor feel the engine. It was that smooth and that quiet.

The bad news? The engine was running on fumes. The fuel clock was on zero, and the board computer signaled an estimated range of 0 km! And this engine needs to supply 12-cylinders with fuel. SH*T! Thank God there was a gas station around 500 meters from the Benz dealer. I pulled in there and filled in 8 liters of the most expensive stuff they had, which the thirsty V12 required. I thought I couldnt make it but the CL600 reached the gas station without coughing or stalling.

As soon as I paid the expensive  10.50 for 8 liters of gas, I made my way to drive this thing around slow and steady, just warming up the engine so I could enjoy the power of the V12. Here are some of my early impressions. The interior was pretty decent. The materials used were an improvement over the original C215 CL, which debuted during the cost-cutting days at Mercedes. In this car, the interior was pleasant. Nothing class leading, but good materials and just a pleasant comfy place to be in. The suspension was a mix between soft and hard, but mostly soft. I noticed a ABC Sport button on the dash and playing around with that, I noticed that the suspension became harder or softer. I left it on sport since I would need that setting. Oh yeah! :bigsmile:]

The steering feel was like an S-Class. Light with a touch of vagueness, but quick acting enough for decent sporty driving. You have to remember that this car is still a luxury GT cruiser at heart and no serious owner would take this thing on the track. At any rate, I had no problems with the steering feel. Guess I am used to it from driving so many older MBs. Even at higher speeds, the cabin remained very isolated from the road: it was like another world inside the cabin since it was so quiet.

By now, the engine was warmed up. This is all I really wanted to experience. The power of a twin-turbocharged Swabian V12 engine with an absurd amount of power. I had navigated unto some local country roads, which were reasonably straight and traffic-free. One last glance in the rear mirror to check if really no one is behind me (yeah right, as if they could overtake me when I punched it! :p])I slowed down to about 10-15 km/h lifted my right foot off the brake let the car roll put my right foot into position over the pedal and HAMMERED it! What happened next just blew me away. First, the rear tires began screeching (and you could feel them burning the ground away!), the car began to shake left and right as the ESP, ABS and ASR and possibly even the ABC systems began their task in stabilizing the car. After a second, the CL600 just took off with some really badass power and force. I was brutally slammed deep into the cushioned seats and could see the speedometer fly from speed to speed. In no time, I was doing well over the legal limit 100 km/h (62 mph): I was in 160 km/h (100 mph) territory and gaining quickly. Oh, point proven. This thing is badass. I slowed down quickly as not to loose control of this thing. As this brutal acceleration was happening, the V12 motor began showing its badass side. From the sweet and quiet engine I had known minutes before, came a badass (dont know how else to describe it) growl that frightened me. This noise just bellowed at me and told me that I have some serious power under the hood.

I wanted to take a 0-60 or a flying start video but the car was just too brutal in terms of shove-back power. I had to control this car when I punched it and that meant both hands on the wheel. Seriously, all that power was just absolutely insane. Even more scarier, those precious 8 liters of gas I poured in where almost eaten up. Boy this thing likes to drink! Especially if someone like me whos constantly doing kickdowns is hammering it. The board computer showed me an estimated fuel economy of 36.2 liters / 100 km, thats 6.5 mpg! 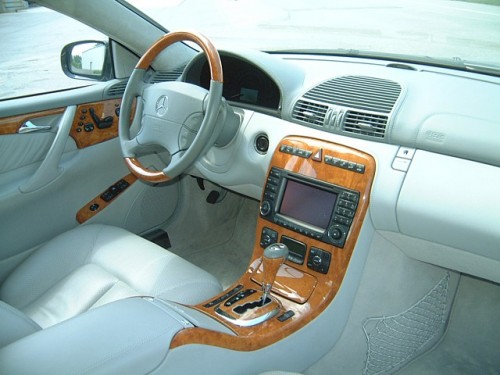 I still had enough gas to have some serious fun so I took it around the area just hammering it, enjoying that thrust of the V12. I couldnt get enough of this car and its power. Here was a one-time opportunity to drive a badass V12 and I was using and enjoying every minute of it. By the way, you couldnt feel any form of turbo-lag on the V12. The response was instantaneous the moment you hit the accelerator. At midrange speed, the engine also responded instantly.

The 5-speed automatic transmission was so good, there wasn any need to play around with it. However, I did fool around with it downshifting into 2nd and 3rd gear and then hammering it if only you were there to experience the results. This thing is badass. Period. I really wanted to take videos, but the car was just to powerful and it was just inviting an accident if I did take videos. Sorry guys, safety first. ]

All the while, I just kept punching it here and there with the same results. The car gained speed so quickly, it wasnt funny. In fact, I had serious problems controlling all that power on those tight roads. The CL600 felt heavy and didnt feel sporty at all. I wasnt expecting it to be since its a luxury GT cruiser, but it really wasnt made for blasting to tight curves at high speed. Where this car is at home is on the Autobahn, where its high speed stability and comfort are designed to bring occupants in safety and style from A to B. Indeed, the car didnt feel like a super handler, but its straight-line power was just unbelievable. But I have to say, the CL was a fun car to drive. Just sitting behind the wheel of such a classy luxury car with a powerful engine upfront is enough to brighten anyones day. The suspension, when not in sports mode, was comfy and ABC really works well in jutting out those bumps so that you cant feel what surface youre riding on.

I just stared at the CL600 from all angles. What a beauty. An elegant and conservative design, it has aged well IMO. Funny thing is, it still looks slightly modern in some sense. I dont think the design is outdated at all. People stared at me when some 20ish year old looking kid pulls up in a big CL. I loved it. Too bad the first owner specified a removing of the CL600 and V12 badges, which made this CL look like a standard CL500 from the outside. The only true evidence that this was a CL600 lay under the hood and in the way it drove.

Honestly, I loved the CL600 and the power it had. But the only place you can really exploit the car is on the Autobahn. Its simply to big and heavy and not that good of a handler on the roads where I live. Aside from that, it has so much power and torque, controlling it in curves is a problem should you keep your foot on the pedal. Realistically, a CL500 would be more than enough for me. Maybe one of these days when I finish pimp school, I will check out the CL-Class in more detail.

Safe and relaxed driving in the new S-Class