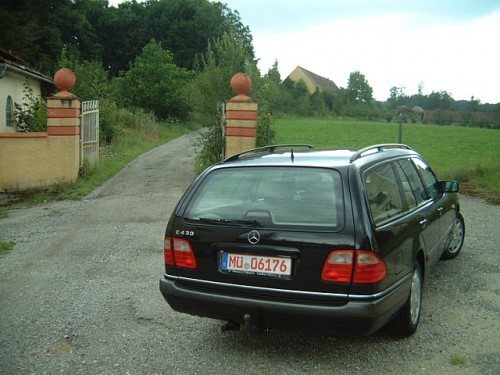 I never much got a chance to drive a W210 E-Class. The only experiences I had with driving W210s was on the used car lot, but that only included moving the cars from here to there for a few meters. Well, I had to go to Landshut and bring back a used 1998 E430 T-Modell (estate) and in exchange for a used 2001 C220 CDI T-Modell (S203). I didnt know I was going to be driving back in an E430 until I got there. Anyway, I couldnt take pictures of the C220 CDI since I had to take a female colleague to Landshut with me. Thankfully, she was nice and talkative and it was a great drive. The C220 CDI was a fun car too. Ive driven the facelift sedan version as well and it drove much better than this pre-facelift C220 CDI. Not much to say about the C-Class. The 5-speed A/T was smooth and responsive, the 2.2-l 4-cylinder CDI engine was powerful, torquey and agile and surprisingly quiet. Handling was decent but nothing sporty, but the steering feel was pretty nicely weighted. Yep, thats about it.

When we arrived in Landshut, I gave up the C220 CDI and followed the man in charge and he gave me the keys to a 210 E-Klasse somewhere on the lot. Thankfully there werent many W210 E-Classes on the lot, so I pressed the open button on the key control pad and a blackish estate beeps and produces an unlocking of the doors sound. Thats my ride home. I was naturally curious to see what model this was so I go behind the car to see what the badge said. I was expecting an E290 Turbodiesel or an E240 / E320, so it was a complete surprise when the badge at the back read E430. Damn, Ive never really driven a W210 E-Class, and my first proper testdrive takes place in a V8-powered E430! Damn I love my life. :bigsmile:]

Being a used car, it was running on fumes so I had to find a gas station and quickly and dumped in 20 liters of the best gasoline they had. I figured I would be hammering this thing and would need that much gas to get back. The dealer would always pay me back the amount if I produced the receipt. With 134,000 km (83,750 miles) on the odometer, this thing would be well run-in.

Well, early on this thing didnt feel very nice. Since this car came about during what I call the cost-cutting days the interior used cheaper materials including wood, which looked like colored plastic and plastic that felt atrocious. I loved the design of the cockpit, classic Mercedes-Benz: but the materials used just werent good enough IMO.

The seats were covered in cream-colored leather and felt very hard and uncomfortable. I never really found a comfortable seating position since these things felt like rocks. :blackeye:]

The steering was pretty bad too. The steering feel was way to light and slow acting as well as very disconnected. I wasnt expecting something sporty, also because this was an Elegance model, but the steering feel felt like no feel. The suspension was very hard as well and a little noisy at times. 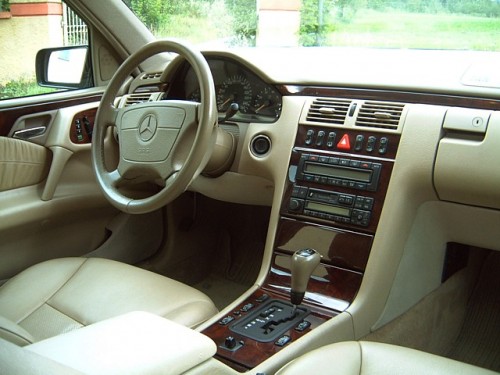 I wasnt very impressed with these major components of the car. Good thing that that 4.3-l V8 upfront was in good shape. It was very smooth and quiet and responded nicely to driver input. When I pushed the pedal a little, the V8 responded instantly and accelerated the estate model at a very respectable pace. 279-horsepower was the V8s output, torque was 400 Nm (295 lb/ft) at 3,000 RPM. Those are pretty respectable figures for an E-Class IMO. Despite this, when punched, the car didnt accelerate brutally. I mean it was fast and pretty badass, but you werent slammed back hard into the seat. The C220 CDI I had brought up before hand had a nice shove-back feel. :praise:]

I adjusted quickly to the steering feel, though curves were no fun with this car. Steering and suspension feel were just too vague. It got the job done, but you constantly had to correct the trajectory. Makes me wonder if the tire pressure varied perhaps in all four wheels, that could be one reason hmm.

A shame I thought. I know the W210 wasnt one of the best MB products, but the design is just beautiful IMO. Ultra conservative when looked at now, but radical and elegant at the same time. In fact, this was one of MBs most revolutionary designs in 1996. Look at the W124 and then the W210: worlds apart design wise. I really love the W210 from a design POV. Though I think in this case, the sedan looks better than the estate. On the W211, the estate blows the sedan away in terms of looks IMO. :sun:]

One thing I wasnt expecting was vault-like build quality feel. The S210 didnt feel well built, but it didnt exactly feel poorly built either. The cockpit was rattle-free and the leather held up pretty well after all those miles. The vault-like feel was lacking however. Thankfully the W211 has it.

I hammered the car a lot enjoying that pull of the V8, and the car drank appropriately. On some of the state roads, I edged the car well past 140 km/h (87.5 mph), and the legal limit was 100 km/h (62 mph). I only did that on roads which were reasonably straight and seemed cop free. Overtaking was piece of cake with this thing too. When I reached M�hldorf, the gas tank was on reserve fuel once again. Oh boy! :p] I think I caught a bad example of a 210 E-Class. Most W210s on the used car lot had a tighter steering feel, still vague, but tighter.

Overall, it wasnt much of a sports sedan and didnt feel sporty at all. But if you drove it nicely and in an elegant manor, it actually drove pretty nicely and felt stable on the road. I guess the W210 was still a real cruiser. These newer MBs have really gotten sportier. I can really feel the differences from driving all these Mercedes: old and new alike. I wasnt too impressed with the whole car however. Didnt feel very luxurious and the comfort was terrible. Also, suspension and steering were horrible. Some of the few plus points: good engine, stable at speed and roomy. I hope I get to drive more W210s since I have a feeling I caught a bad example. It wasnt one of the best Mercedes, but I didnt expect it to be this bad. From what little experience I have with other W210s on the dealer lot, I have a feeling that the W210 will drive on a whole, better than the E430 I got to experience. Well see.