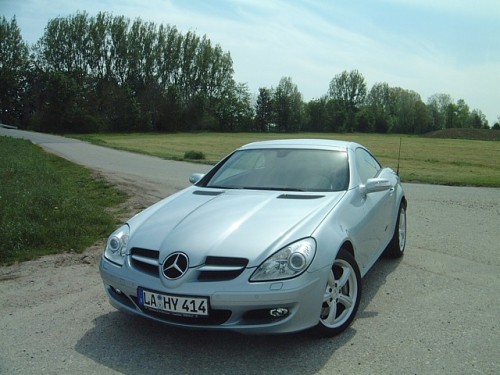 Oh yeah, I finally got to experience the joy of driving an SLK350! :sun:] This SLK had a nice light metallic blue color to it. Not my favorite color, but it looked ok on the car and I was happy the thing wasn’t black as it was a hot day. Great car, great car!
Now, let’s make this clear from the start. SLK350 = 3.5-l 4-valve per cylinder V6 with 272-hp and 350 Nm of torque (258 lb/ft). The SL350 I drove yesterday had a different engine (3.7-l V6, 245-hp). ]
Remember how I complained about the new R171 SLK being too small for me? I take that all back. However, it comes with a catch. This SLK350 had the 7Gtronic A/T transmission. My spacial gripes with the manual SLK200 Kompressor were that everytime I shifted, my left knee would collide with the steering wheel. No such worries here as my right foot did all the work. Anyway, I fitted perfectly inside the cabin. Head space, upper body and leg space were fine, and I am 6’4″ tall! I did feel a slight attack of claustrophobia because the cabin is still pretty small. Soon, I would be able to have that lovely Variodach (roof) vanish in the trunk.

I was hoping for a 6-speed manual version but the dealer only had a 7Gtronic model available. Apparently, the 6-speed isn’t in great demand here. The 7Gtronic SLK350 is quicker than the manual SLK350, and having a experienced a 6-speed M/T SLK200 Kompressor, I came away with the opinion that the 7Gtronic is just as fun in its own way. In this case, the 7Gtronic was flawless. This is the 4th time I have experienced this transmission and it is simply amazing. I think anyone who has experienced it would agree. During my drive, the transmission was flawless. I could even manually shift using the steering wheel “paddle shifts” which were buttons located behind the wheel. I do feel that when driving the 7Gtronic, let it do all the work. Interior materials were mostly HQ plastics and suitable for this class of car. The silver plastic buttons looked better than black plastic buttons IMO.

The 3.5-l V6 is a gem. It’s smooth, very responsive and doesn’t lack power either. In fact, such a powerful engine in the subcompact little SLK is pretty insane: imagine the SLK55 AMG!? :o] I drove around very relaxed to warm up the engine and ready here for some kickdown pounding. At this point, I can report on suspension and steering qualities. Comfort “sucked” because the suspension was quite stiff. Every little instability onroad was transferred through the springs into the interior. However, this theoretically meant that the SLK350 would be a nice handler because of the stiffer suspension: and that it did just fine. Handling was a joy in the little car. It took curves at ease with very little body roll. This pleasure was further enforced by the responsive steering. The steering wheel felt heavy and weighted and also direct and was also quick acting with a slight touch of vagueness to it the faster you drove. It appeared as if this SLK350 had the Parameterlenkung but I am not sure about that. Despite this, great handling car. I actually felt the steering qualities of the base SLK200 Kompressor were a little more direct than this car. The SLK350 handles and drives better than the SL350 I took for a spin yesterday. 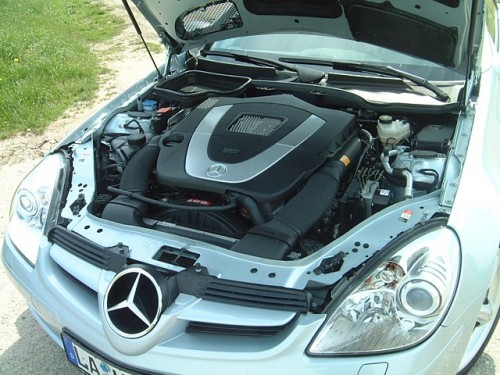 With the engine properly warmed up, I proceeded to do what a car enthusiast sets out to do: put the pedal to the metal. I slowed the car down to a fullstop at the local hobby airport where there are a lot of straight roads. 1…2…3 kickdown! Instantly, the front of the SLK lifts up slightly and the V6 produces a nice screaming growl. At the same time, I was shoved back harshly into the seat and my eyes fell unto the speedometer where I saw the speedometer fly from speed to speed. I managed 170 km/h (106 mph) before I had to break and slow down. Damn that was fast! The SLK350 really pulls strongly with that new engine upfront. I even took a little video of the car accelerating but it wasn’t a real kickdown when I made the short movie clip. It’s still fun to watch and the engine sound will make you drool! If anyone can host it for me, please let me know!

I drove around for awhile taking the SLK350 into curves and thrashing the engine around. Every single time, it took off with voracious power and eagerness. Midrange power? No problem here. The little car with the big engine make for a strong team in this area. Torque was enough to shove you back into the seats big time. Then I stopped and converted the SLK350 Roadster into an SLK350 Convertible at the flick of a button.The roof dissaparead almost noiselessly into the trunk. Now I had the summer sun shining on me mixed with a cool breeze that was passing through the area. Ideal weather for convertible driving, just like yesterday with the SL350. Let me tell you, driving this car topless was much more fun than with the roof up. This SLK350 had the optional Airscarf but it wasn’t winter, so I didn’t need it. I didn’t take the car into town although I would have loved to get some attention with this baby.

My verdict? A great fun car. It’s no long-distance car for big people but for roaming around the countryside, it’s perfect. The V6 is genuinely powerful and smooth and makes a good match with the 7Gtronic. If you think the addition of the 7Gtronic ruins the ride, think again, it doesn’t. Although I’d like to have the 6-speed myself in this car, the 7Gtronic was a pretty good transmission and more than suitable for this car. That said, I’d prefer the 6-speed, but wouldn’t mind the 7Gtronic at all. Plus, I had the most fun just driving around and enjoying the cars handling abilities. Definitely one of the best handling Mercedes’ I have ever driven. Also one of the most sportiest Benzes ever.

I only wish that Mercedes made the car a little bigger on the inside. While I fit into the A/T SLK with no problems, the M/T version is too small for me. Oh, and MB should also lower the price.

That said, the SLK350 is one hell of a car. A huge step in making MB more driver oriented IMO. It also looks sweet as hell and remains my dream car along with the CLK.

Other thoughts: compared with the SL350 yesterday, the SLK350 wins hands down in terms of sportiness. The SL was clearly more cruiser than sports car. Both are fun to drive in their own way, the SL in a relaxed sort of way and the SLK in a pushing it type of driving style. The SLK just felt like the car that you could push more to the limit and it would cope more easily than the SL. Ah heck, gimme both and I’ll be happy.