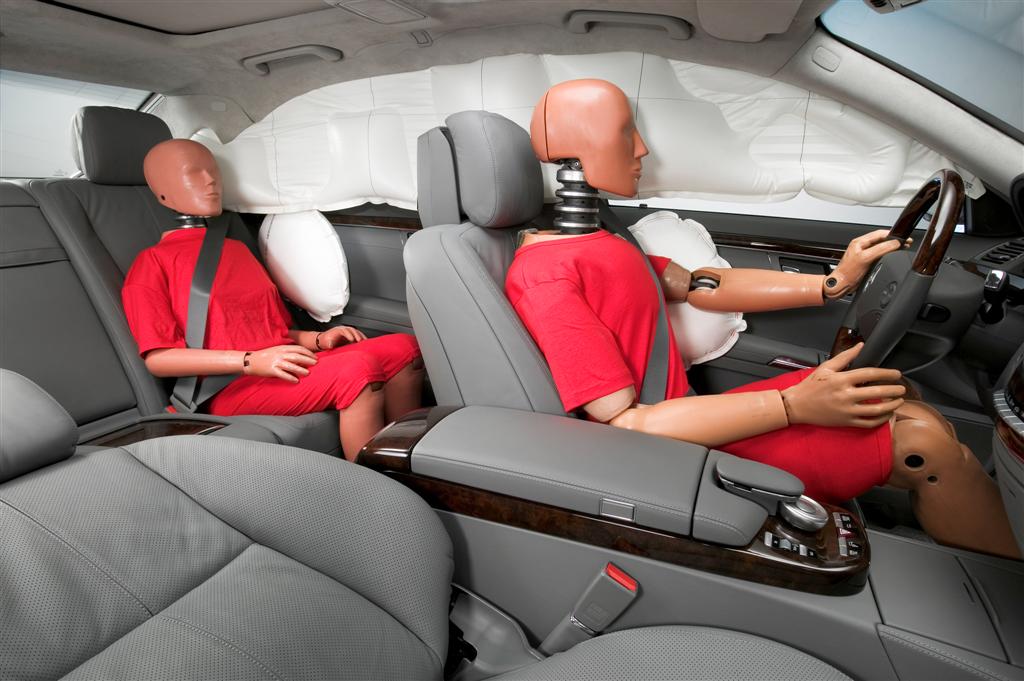 October 23, 1971: Mercedes-Benz is granted a patent for the airbag Development of the new safety system commenced in 1966 Introduction in the S-Class of the W 126 series in 1981

Stuttgart, On October 23, 1971 Mercedes-Benz was granted a patent for a new system affording car occupants protection in an accident: the airbag. The development of this new safety feature had already been initiated at Mercedes-Benz five years beforehand, in 1966, and practical tests had been carried out since 1967. This patent was a decisive step towards series maturity for the airbag. The first drivers airbag was installed in the S-Class of the W 126 series in 1981; todays Mercedes-Benz vehicles incorporate an entire system of protective airbags.

With the series introduction of the protective airbag in 1981, Mercedes-Benz successfully concluded a development process that had started with the earliest concepts in the 1950s in the USA. However, from the very beginning of research, Mercedes-Benz had been pursuing a different aim from that of the American engineers, who under pressure from the U.S. government had set out to develop a retention system that would reduce the number of severe injuries in road accidents and at the same time relieve the vehicle occupants of the responsibility for their safety.

The reasoning: while the seat belt can only function if it is fastened on each and every journey, the airbag is automatically triggered in an accident. On the other hand, experience in the USA showed that the front-seat passenger, in particular, hardly benefited from the first airbags that were installed in vehicles in the early 1970s. In some cases, passengers not wearing a seat belt even suffered additional injuries from the deploying airbag.

The Mercedes-Benz engineers had been prepared for problems such as these: it was already clear to them in the 1960s that the airbag cannot replace the seat belt, but merely supplement it. This was borne out in 1981 by the abbreviation SRS on the impact boss of the S-Class steering wheel, which housed the new airbag. The letters stood for Supplemental Restraint System.

The basis of all subsequent developments

Even though almost ten years were to pass from the time patent No. DE 2152902 C2 was issued on October 23, 1971 up to the sale of the first Mercedes-Benz sedan with an airbag, the principle of this new technology was already clear in the patent application: a sensor registers the extreme deceleration typical of collisions and triggers the airbag mechanism. A propellant of sodium azide, potassium nitrate and sand is thereby ignited; in the ensuing explosion, this mixture is transformed mainly into gaseous nitrogen along with a certain amount of hydrogen and oxygen.

Unlike cartridges filled with compressed air or propellant gas, the airbags propellant charge, which was adopted from rocket technology, proved a reliable, rapidly activated gas generator: within a fraction of a second, the nitrogen inflates the airbag made from a special fabric, which then functions as a soft cushion to absorb the impact against the passengers who are thrust forward.

This cushioning effect is reinforced by slits in the fabric of the airbag, through which the gas can escape more rapidly when the occupants upper body sinks into the cushion. The new safety system reached its full efficiency in combination with the seat belt.

Encouraged by successful trials (including a total of 250 crash tests and around 2,500 trial runs on the crash sled), the Board of Management of the then Daimler-Benz AG resolved in 1974 to further develop the airbag to series maturity. At the Geneva International Motor Show, Mercedes-Benz finally presented the new safety system in the S-Class from the W 126 series; and as of July 1981 it was available as an optional extra originally for the driver only for this luxury sedan. No less than 2,636 S-Class buyers decided in favor of the airbag in the first year alone. In combination with a belt tensioner for the front passenger, it was originally priced at DM 1525.50 (or around 780 euros).

From 1981 onwards, the airbag underwent constant further development at Mercedes-Benz, and the offer was extended to further models until this feature became optionally available for all the brands passenger cars in 1984. The drivers airbag became a standard feature in the USA the following year. At the 1987 IAA, the Stuttgart engineers presented a front passengers airbag for the first time.

At the 1993 Geneva International Motor Show, Mercedes-Benz presented a study for a side airbag; this feature became optionally available in the E-Class for the first time in 1995. An automatic childs seat recognition feature, which deactivates the airbag if a special childs seat is fitted, was demonstrated by Mercedes-Benz in 1996.

This was followed in 1998 by the windowbag for the E-Class, along with the newly developed adaptive front passengers airbag for the S-Class models it is deployed in stages, depending on the severity of an accident. Adaptive airbags for the driver and front-seat passenger be-came standard for the C-Class in 2000, and the following year the Stuttgart engineers presented head/thorax sidebags in the new SL (R 230 series).

Airbags are also a component of the PRO-SAFE integrated safety concept presented in the S-Class (W 221 series) in 2005. This concept comprises elements of active and passive safety systems (PERFORM-SAFE, PRE-SAFE, PASSIVE-SAFE and POST-SAFE), thus bringing the Vision of Accident-free Driving a further step closer to reality.

These pioneering concepts would hardly be possible today without the master achievements of the engineers of yesteryear and one such concept is the airbag. Since the patent was issued in 1971, the airbag has saved the lives of thousands of people involved in road accidents.

The BRABUS Tuning Program for the new Mercedes CL