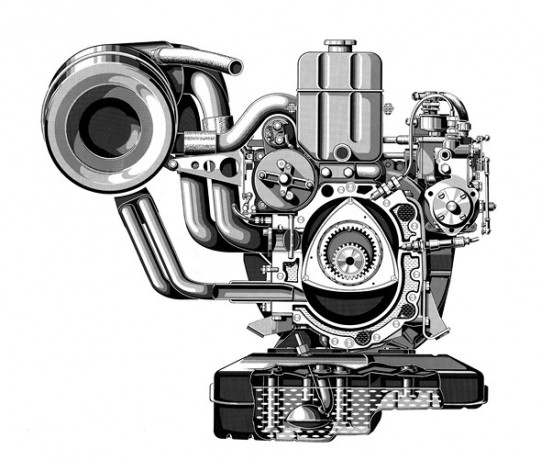 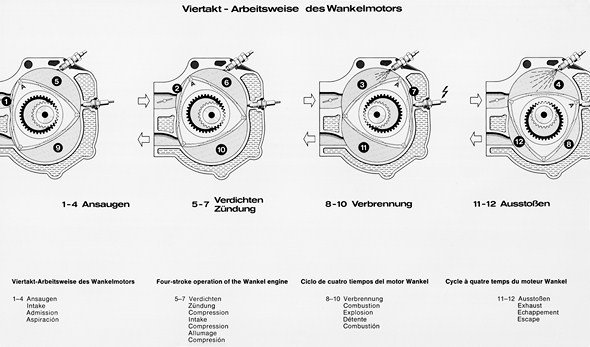 Wolf-Dieter Bensinger, head of engine development, is an advocate of these assemblies which Mercedes-Benz tests in a variety of demonstrators. The most famous is the C 111 research vehicle which appears in 1969, initially with a three-rotor engine, and later with a four-rotor power unit.
The SL, too, is included in the tests. The first vehicles fitted with rotary piston engines to be driven around the test circuits at the end of the 1960s, making their characteristically peculiar buzzing noise, are W 113 series SL vehicles.
An M 50 F model three-rotor engine has been installed in the experimental SL with the designation W 33-29. It has an overall 3.36 litre chamber volume, producing 203 bhp (149 kW) at 5600 rpm and, between 18 June and 23 October 1968, it notches up some 69,000 kilometres. With a top speed of 205 kph, the vehicle is almost 10 kph faster than the 280 SL production vehicle at that time.
It is not initially the intention to install rotary piston engines in W 113 series SLs. But it is quite a different matter with the subsequent R 107 series SL which comes onto the market in 1971; right from the start, its transmission and propshaft tunnel are designed to accommodate the greater installed height of the rotary piston engine with its high central power take-off. 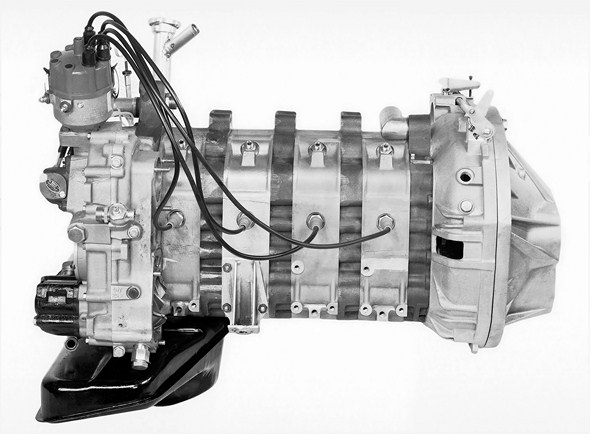 Three and four-rotor engines are envisaged. From the test record, we learn, for example, that in 1971 it takes two months and four days to install a KE 413 four-rotor experimental engine in an R 107 series SL, internally designated as the 48-33. It generates 277 bhp (204 kW), making it more powerful than the reciprocating piston engines in use at the time.
Yet Hans Scherenberg, head of engineering design, and Kurt Obländer, his expert on combustion and pollutant reduction matters, are already sceptical of the engine’s prospects. Of course, the advantages of the rotary piston engine are understood. But, in the light of the knowledge gained from the experimental vehicles, its drawbacks are also recognised.
Obländer’s firmly held belief is that “the combustion chamber is the central feature of the combustion engine. The priority is to produce an optimum design so as to achieve the most favourable thermodynamic efficiency, i.e. as complete combustion of the fuel as possible.
The fact that this did not occur with the Wankel engine, indeed that it could not happen, manifested itself initially in high fuel consumption and later, even more publicly and confirmed officially, in the difficulties in meeting the still quite tame exhaust emission standards for passenger cars due to the high proportion of non-combusted hydrocarbons. 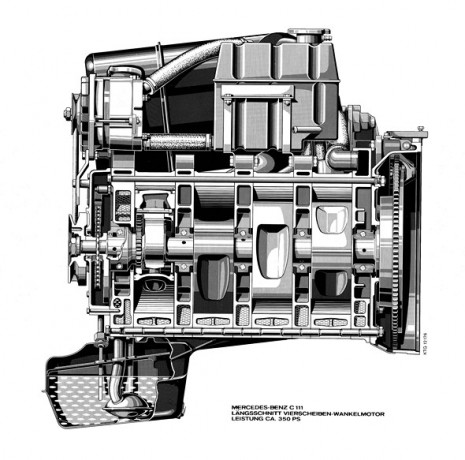 It was this birth defect in the Wankel engine, its failure to offer an optimum combustion chamber, which was responsible for its rapid demise and not the constantly repeated suggestions of mechanical problems.”
Also, looking back, it is said that Daimler-Benz’s pre-occupation at that time with the rotary piston engine adversely affected its development of more advanced reciprocating piston engine. Although this was a setback, the effort and commitment shown by Scherenberg, an engine expert who succeeded Fritz Nallinger as the new head of engineering design, went a long way towards regaining the lost ground by the time he retired in 1977.
None of the original experimental SLs with rotary piston engines is still in existence. However, there is one R 107 with this engine: Felix Wankel’s very own SL. He asks Scherenberg at the time for an M 950/4 four-rotor engine and has it installed in a recently-purchased SL in his institute in Lindau.
In November 1979, the “auto motor und sport” trade journal publishes a report on this unique vehicle, timing its acceleration from 0 to 200 kph at 25.9 seconds with a top speed of 240 kph – impressive figures which are testimony to the engine’s performance potential.
Tags
r107 rotary w113

The latest on the C- and E-Class and the SLK

Paying tribute to SL history during the 2012 Mille Miglia