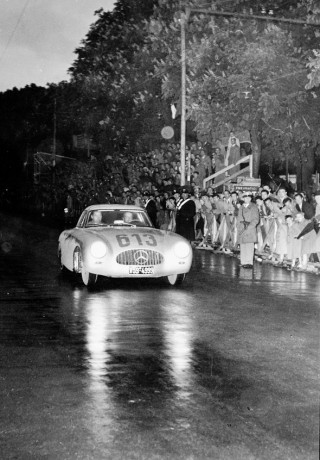 This represented a promising start to Mercedes-Benz’s return to the international motorsport arena.

For this year’s Mille Miglia, Mercedes-Benz Classic is paying homage to that 1952 premiere and other successes achieved by the Stuttgart-based racing department in the legendary road race first held 85 years ago: from 17 to 20 May 2012 an original 300 SL racing sports car will be taking part in the 1000-mile rally from Brescia to Rome and back. 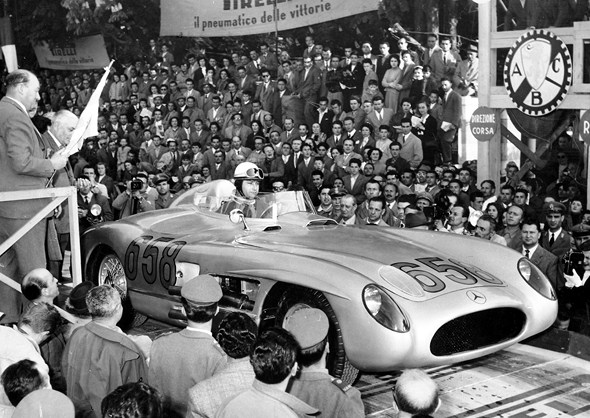 These days, the Mille Miglia is an event for vintage vehicles which only those types of classic cars dating from the original road race between 1927 and 1957 may enter. 2012 sees this historic Mille Miglia – one of the most exciting events for classic cars at all – being held for the 30th time.

The organisers aim to fill the field with exemplars of authentic cars and as many original vehicles from the era of the Mille Miglia races of speed as possible. In addition to the 300 SL (W 194) racing sports car, therefore, Mercedes-Benz Classic will be represented by a large number of other exclusive vehicles ranging from the SSK racing touring car to the 300 SLR (W 196 S) racer and the standard 300 SL (W 198 I) sports car. 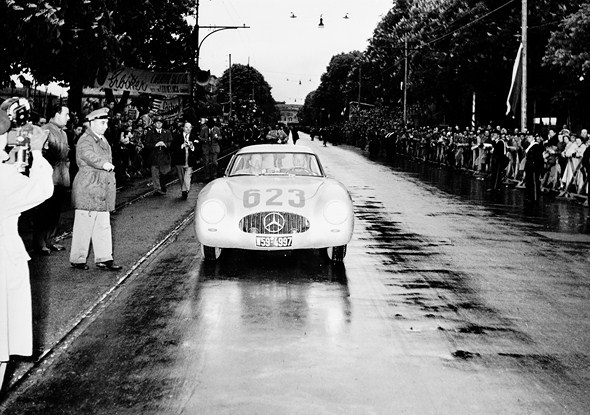 The line-up includes the 300 SLR driven by Juan Manuel Fangio in the 1955 Mille Miglia (his starting number then was 658 and he placed second overall) and the 300 SL production car with which John Cooper Fitch won a class victory among the GT sports cars with a displacement above 1300 cc that same year (starting number 417, ranked fifth overall). A Mercedes-Benz 180 D will also be there – a saloon of this model won the diesel class of the 1955 Mille Miglia.

The 2012 Mille Miglia kicks off on 16 May with the technical checks and other items on the agenda in Brescia.

There is also a special “Mercedes-Benz Champions at Mille Miglia” exhibition at the Museo Mille Miglia in Brescia. Daimler entered into a strategic partnership with the museum in January 2012 and, among other fascinating topics, the present exhibition covers the 1952 racing debut of the 300 SL prototypes and the legendary victories by Rudolf Caracciola in 1931 in a Mercedes-Benz SSKL and by Stirling Moss in 1955 in the Mercedes-Benz 300 SLR. 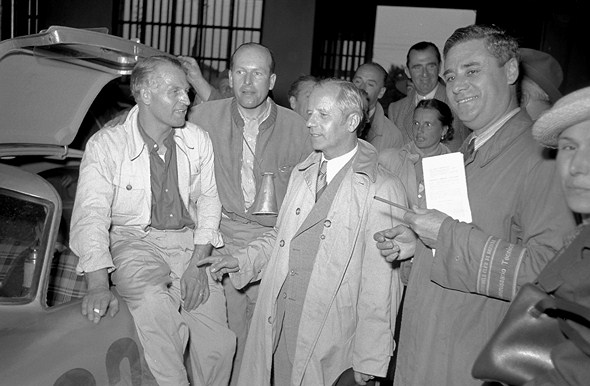 On 17 May, the 376 participating vehicles will be presented to the public in the old town of Brescia before the first car sets off at 6.30 p.m. All cars will then head to Ferrara, the end of the first stage, arriving by late evening and passing Lake Garda via Verona, Vicenza and Padua en route.

From Ferrara, the event continues next morning (18 May) to Ravenna, through the Republic of San Marino and then on to Rome. The third and final leg goes from Rome to Viterbo, Siena, Florence, Bologna, Modena, Reggio nell’Emilia and Cremona before the participants arrive back in Brescia on 19 May.

The awards ceremony takes place on 20 May. This year, the Mille Miglia’s route crosses the regions of Lombardy, Veneto, Emilia-Romagna, Marche, Umbria, Lazio and Tuscany. 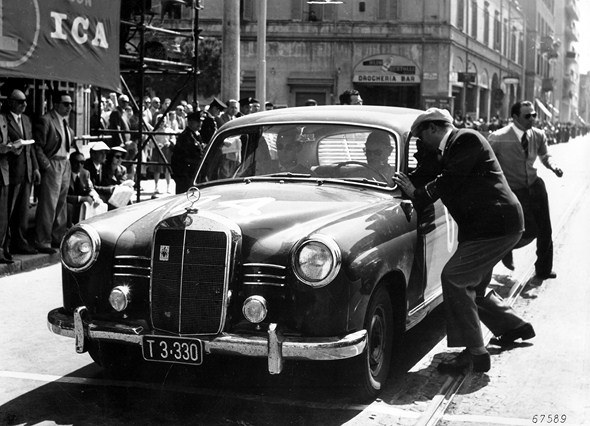 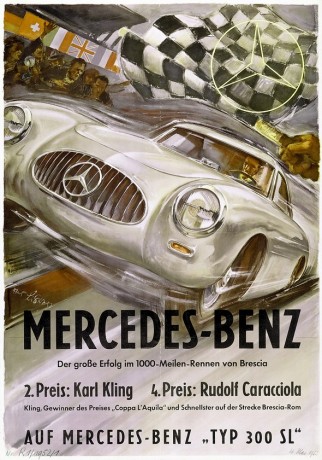 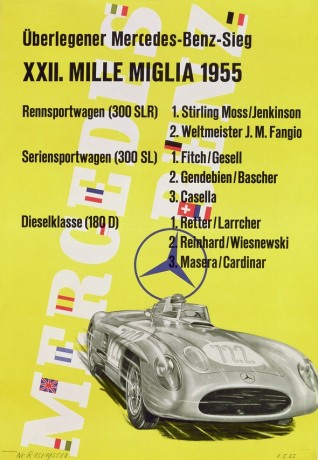 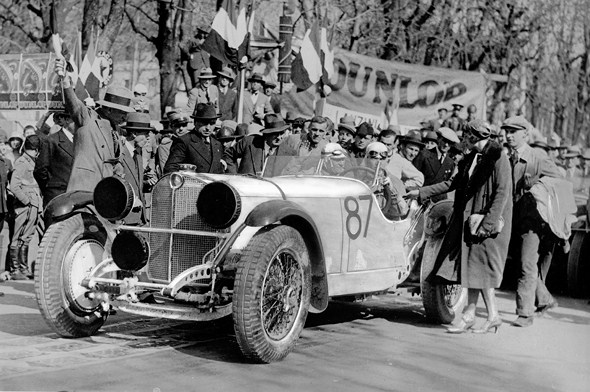 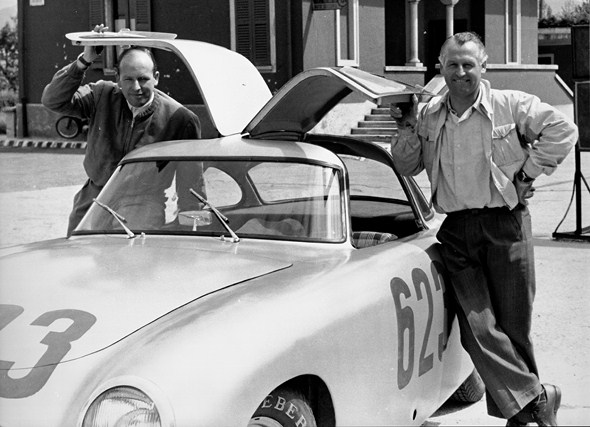 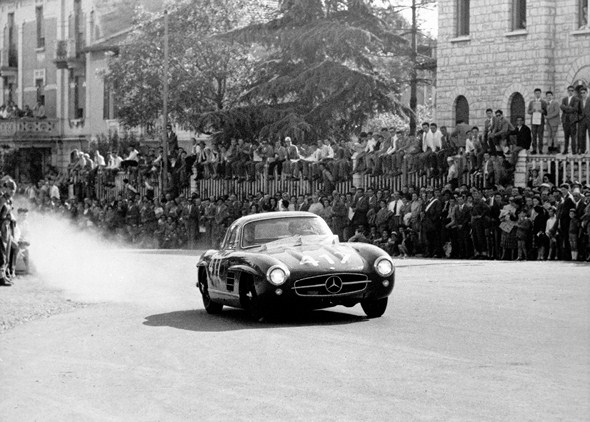 Mercedes-Benz vehicles in the 2012 Mille Miglia

Of the supercharged six-cylinder sports cars in the Mercedes-Benz S-series, the SSK (model series W 06) is the most exclusive and beguiling. The model designation is an abbreviation of “Super-Sport-Kurz” (German for Super-Sport-Short) because it combines a short wheelbase with extreme sportiness. On 29 July 1928, the brand-new SSK was driven straight to victory by factory racing driver Rudolf Caracciola in the Gabelbach race and other races such as the Schauinsland hill climb near Freiburg and at Mont Ventoux. In 1930 and 1931 the SSK helped Caracciola win the European Hillclimbing Championship. With its weight reduced and performance enhanced further, the 1931 version – also known as the SSKL (Super-Sport-Short-Light) – achieved equally spectacular successes. One of the most significant was victory in the legendary 1000-mile Mille Miglia: in April 1931, Rudolf Caracciola in the SSKL became the first non-Italian to win the gruelling road race from Brescia to Rome and back.

Mercedes-Benz returned to international motorsport in 1952 with the 300 SL racing sports car (model series W 194). A lightweight space frame forms the basis of this sports car over which a light alloy body made of aluminium/magnesium sheet metal elegantly curves. Because the space frame sits comparatively high at the sides it was not possible to fit the W 194 with conventional doors, which is how the racing sports car comes to have its distinctive, upwardly opening gullwing doors. This detail became part of the production model 300 SL sports car (W 198 I) in 1954. The W 194 is powered by the 175 hp (129 kW) M 194 six-cylinder in-line engine with a displacement of 2996 cc. The 300 SL made its racing debut in May 1952 at the Mille Miglia, having been unveiled for the first time that March. Some of the W 194’s greatest successes in the 1952 racing season were a threefold victory in the Prix de Berne race, double victories in the 24 Hours of Le Mans and the 3rd Carrera Panamericana and victory in the Nürburgring Anniversary Sports Car Grand Prix.

Mercedes-Benz won the 1955 World Sportscar Championship with the 300 SLR. This sports car is based on the chassis of the W 196 Formula One racing car but has two seats and a three-litre, eight-cylinder in-line engine made of light alloy in place of the 2.5-litre Formula One engine with its steel cylinders. Delivering 310 hp (221 kW), the 300 SLR is superior to its competitors from 1955, as documented by gaining first and second place in the Mille Miglia, the Eifel race on the Nürburgring, the Swedish Grand Prix and the Targa Florio. The 1955 Mille Miglia was won by Stirling Moss assisted by navigator Denis Jenkinson at an average speed of 157.65 km/h, a record that has never been beaten. Pacenotes proved invaluable in achieving this victory and at the time were a new technique allowing Jenkinson to direct the driver Moss very effectively. Juan Manuel Fangio came second driving solo. In Sweden and the 24 Hours of Le Mans the 300 SLRs were assisted by an “air brake” – a 0.7-square metre hood over the rear axle that could be hinged up when braking to increase braking performance. At Le Mans Mercedes-Benz withdrew the 300 SLRs, which were in the lead, after an accident involving the Belgian Pierre Levegh through no fault of his own.

The 300 SL gullwing made its debut in February 1954 at the International Motor Sports Show in New York. This high-performance sports car is based on the legendary racing sports car from the 1952 season. A lightweight, torsionally stiff space frame carries the engine, transmission and axles. As with the racing version, there is no room for conventional doors and so the gullwing doors are a distinctive feature of the 300 SL (model series W 198 I). The gullwing model is also a champion of innovation in other respects: it was the world’s first production passenger car to be powered by a four-stroke engine featuring petrol injection. This boosted efficiency as well as engine output to 215 hp (158 kW), a 20 percent increase on the carburetted competition-only version and permitting a top speed of up to 260 km/h, depending on the transmission ratio installed. This makes the 300 SL the fastest production vehicle of its time and the dream sports car of the 1950s. It was also driven to victory in the 1955 Mille Miglia by the team comprising John Fitch and Kurt Gesell, winning the Gran Turismo production class above 1600 cc and coming fifth overall. Also in the Gran Turismo class, the team comprising Olivier Gendebien and Jacques Washer ranked seventh overall. The 300 SL took part in the 1956 Mille Miglia too: in the big GT class the team of Prince Metternich and Count Einsiedel came in sixth.

The first diesel-engined version of the Mercedes-Benz 180 (model series W 120) was premiered in January 1954. The Stuttgart-based brand now offered its modern “Ponton” saloon with a compression-ignition assembly outputting 40 hp (29 kW) with a displacement of 1767 cc. From 1953 (preproduction series) to 1959, a total of 114,046 model 180 D saloons were built. With a top speed of up to 110 km/h, this diesel saloon cannot compare with the racing and sports cars that were favourites to win the Mille Miglia overall in 1955. However, the 180 D is a highly contemporary car with a self-supporting body and what is known as a subframe to which the front wheels, located by double wishbones, were attached. The car proved its strength and reliability in the Italian road race: Mercedes-Benz entered several 180 D vehicles, culminating in a threefold win in the diesel class for the cars with starting numbers 04, 09 and 010A.

R1234yf refrigerant, perhaps not so safe..