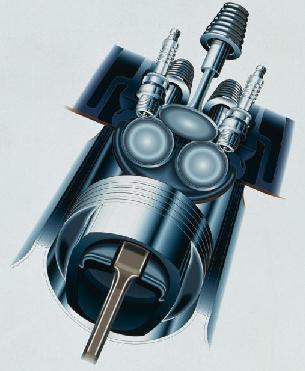 In emissions testing, the load at which large-volume six and eight-cylinder engines operate during warm-up is insufficient for them to be able to attain high exhaust temperatures quickly.

One way this can be achieved is by means of three-valve technology, as used by Mercedes-Benz on all S-Class petrol engines.

Dispensing with one exhaust port reduces the heat loss from the exhaust stream so that the catalytic converter reaches its operating temperature some twelve seconds sooner following a cold start.

Originally filed against Mercedes-Benz USA, the suit was expanded to include DaimlerChrysler several weeks later.

The suit claims that Mercedes-Benz, which has no patents on three-valve technology, uses Feuling patented technology in their new passenger car and SUV engines to meet stringent new Environmental Protection Agency (EPA) and California Air Resources Board (CARB) emission standards.

“We put Daimler on notice back in 1997, but it would appear that Daimler did not disclose this very serious issue to Chrysler Corporation and its stockholders prior to their merger,” said Jim Feuling, president of Feuling Advanced Technologies.

“Stuttgart’s knowing and willful infringement of four United States patents places not only DaimlerChrysler at risk, but also its stockholders, dealers and customers.

Feuling has been a leading automotive engineering design firm for over 25 years with clients including Ford, General Motors and Harley Davidson.

“We have spent the past eighteen months attempting to resolve this issue with Mercedes-Benz,” said Feuling. “They have admitted they did not perform a patent search prior to production of the three-valve engine and that the Mercedes three-valve product relies on a number of our patent claims.”

Improvements include reduced emissions, increased thermal and volumetric efficiency and the ability to run a higher compression ratio on pump gas for added fuel economy and power.

“Three-valve technology is the wave of the future,” Jim Feuling said. “Our new technology delivers major improvements in fuel economy and emissions over comparative four and five valve cylinder head designs currently being used in the automotive industry.” (Hot Rod Magazine spotlights the design in their June ’99 issue.)

Feuling’s three-valve patents were first filed with the U.S. Patent Office in May 1992. Additional U.S. and foreign patents are pending.

James J. Feuling is an inventor, author, publisher, pilot, motorcycle and automobile designer/builder/racer and leading edge researcher/developer in the field of engine design and airflow technology. He founded Feuling R&D/Advanced Technologies in 1974.