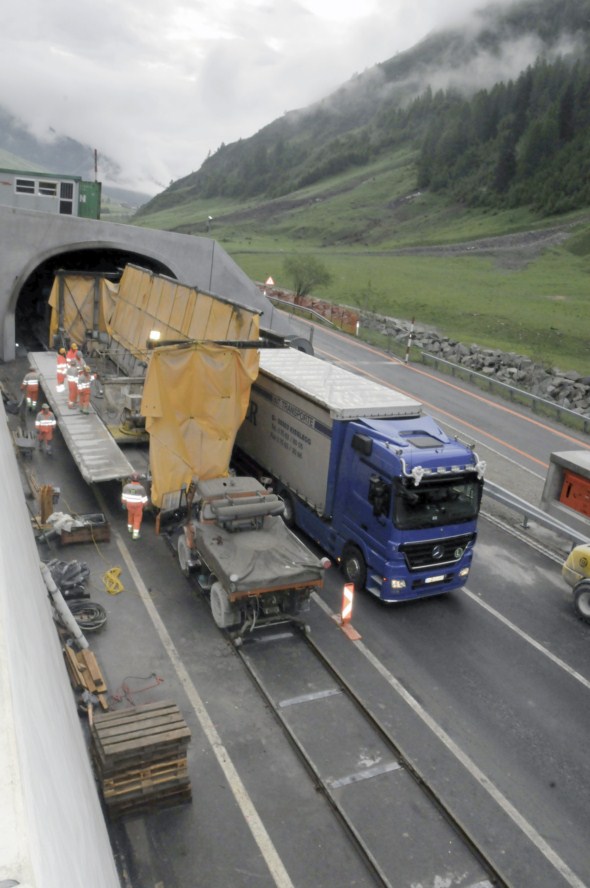 Stuttgart/ Nufenen (Switzerland) –  According to Rudolf Dieterle, who is in charge of the Swiss Road Works Department (Astra) and its many tunnels,  Swiss road tunnels are among the safest worldwide. In spite of this, Astra is well aware that 126 of the overall 220 national road tunnels do  not yet come up to the latest safety standards, or only partly so.
Of the total of 1.2 billion Swiss francs allocated by the Bern Parliament for improvements to the safety of these man-made structures, by the end of 2010 thirty-eight million francs will have already been used for the section of national road A 13 including the Cassanawald Tunnel and the connection to Nufenen. Among other things, the construction work includes applying fireproof mortar to the tunnel vault. The work is being done by the Luzern Construction Company Marti AG. 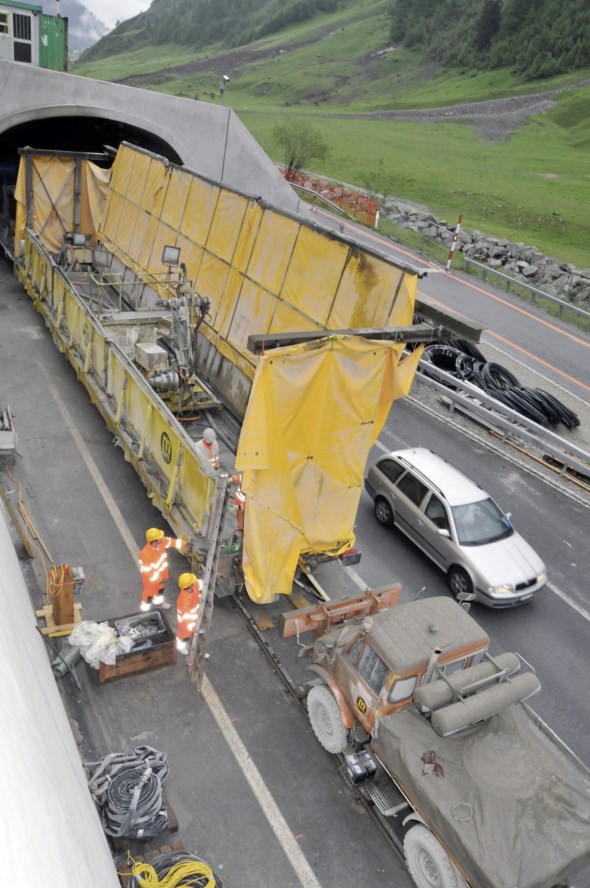 Unimog Shunts the Construction Train through the Road Tunnel
Marti AG has brought its construction plant to Bundnerland installed especially for this contract on four Swiss Railway (SBB) freight wagons as only the Mercedes-Benz Unimog is capable of moving them up here into the Rheinwald valley along the narrow upper reaches of the Hinterrhein river. The heart of the work train is the 19 m long “machine wagon” which carries machines for wet and dry spraying as well as four metre high screens to provide protection during spraying work.
The second freight wagon is fitted with a permanently fitted concrete mixer, the third carries the compressors and finally the fourth wagon carries silos for construction materials.
While being used for driving, shunting or as a train in the Cassanawald Tunnel, the Unimog has to be “wrapped up”. Athough it is an incredibly resilient vehicle – with its 40 years of working life, this vintage Unimog is still untiring on the job – it has to be protected from the very diluted concrete which is sprayed on the walls of the tunnel.
The spraying machines apply a four centimetre thick layer of fireproof mortar which can withstand tempera-tures of up to 2,000 °C. If there is a fire in the tunnel, this layer of mortar is supposed to prevent the concrete vault from being destroyed as the vault roof is of supreme importance for the overall stability of the tunnel structure.Altogether the work train is 40 m long and weighs about 60 t. The “engine” is a vintage Mercedes-Benz Unimog which used to belong to the Swiss Army and has now been fitted with road-rail equipment by the road-rail specialist company Zwiehoff from Rosenheim (Upper Bavaria).
This additional equipment means that the vehicle can be operated just as easily on rails as along the road – and it also makes it unbeatable for cost-effective and versatile operations such as shunting or getting to de-railed trains and on-tracking. The Unimog shunts the work train to where it is needed which means that it has to cope with a track profile with gradients of up to 3 percent within the tunnel itself. As it works in the tunnel with its engine running it is absolutely imperative that the Unimog comes up to the European exhaust emission standards Euro 4 and this has been achieved by fitting a particle filter and making various other engine modifications. 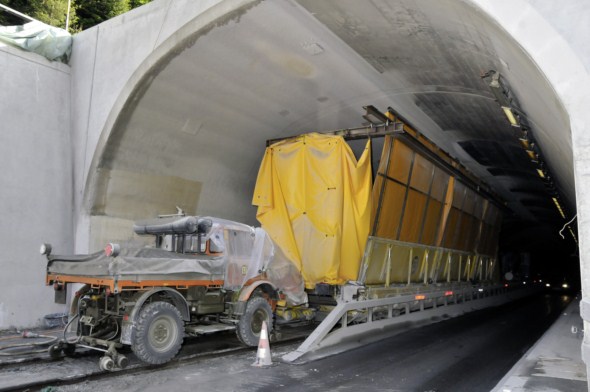 The protective screen has really proved to be “the philosopher’s stone” for this project as on the one hand it allows work to be carried out without interruption and it also protects the continuous flow of traffic from being begrimed by the very diluted fireproof mortar.
This means that the traffic can at least pass the roadworks on one lane as up here in the narrow Hinterrhein valley there is only the narrow canton road H13 available for a one lane diversion for on-coming traffic. Martin Werthmüller, Marti AG’s construction engineer who is responsible for the project in Cassanawald, regards this work train with its construction equipment as playing a very important role in making sure the construction work stays on schedule.
“We usually work on SBB railway tracks where using engines to pull and shunt our work trains is not an issue, but we have quickly realized that there is no alternative to the Unimog as a substitute engine when road-rail operations are involved.”
During the thousands of years the Alps have been crossed, people have used all kinds of transport to carry goods over roads, paths and trails and to overcome this intimidating mountain stronghold. Nowadays, endless streams of modern vehicles cope with these mighty mountains as though there were no differences in altitude or weather divides to be overcome. But that the Cassanawald road tunnel at 1,600 m above sea level on the northern ramp of the A 13 running from Chur to Bellinzona/Lugano would be crossed by rails would have been a visionary affair even for the main initiator of the Raetian Railway, the Dutchman Willem-Jan Holsboer.
Tags
unimog