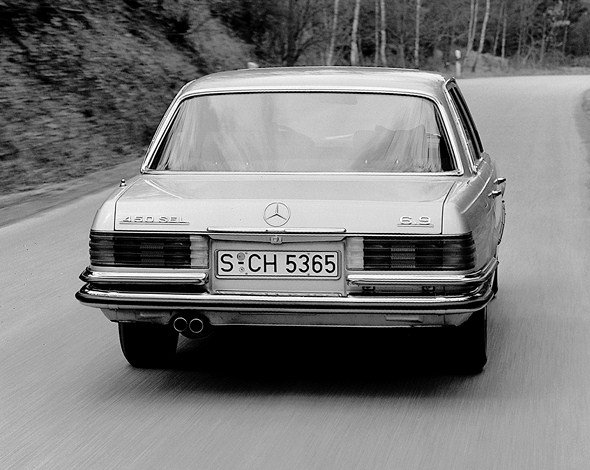 Stuttgart. The oil crisis in the early 1970s had deeply shocked the western world, causing, among other things, the launch of a unique model from Mercedes-Benz – the 450 SEL 6.9 (W 116 series) – to be postponed.

An engine with a displacement of 6.9 liters was, after all, difficult to sell, to put it mildly. And yet the strategists took the risk and in May 1975, one-and-a-half years later than planned, presented the car to a public that was instantly intrigued by the car.

Among the car’s beguiling features were its performance figures. The gigantic engine generated an output of 286 hp (210 kW) at 4250/min and a maximum torque of 56 mkg at 3000/min, providing the car with top-notch sports-car performance. 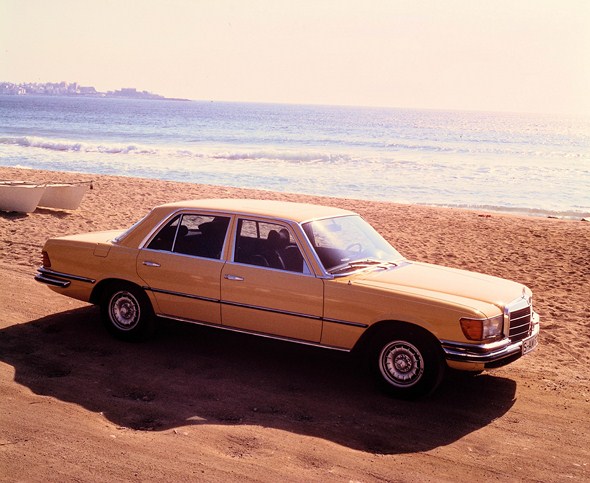 The sedan accelerated from standstill to 100 km/h in 7.4 seconds and had an “official” top speed of 225 km/h – motor journals measured even higher speeds. But it was also the engine’s power development that was quite extraordinary.

Drive torque was available in abundance at all times, permitting anything between a leisurely pace and hard driving.

Another beguiling quality of the 450 SEL 6.9 was its refinement at the highest level. The car was, after all, the noblest representative of the Mercedes-Benz S-Class in the 1970s, and noblesse oblige. 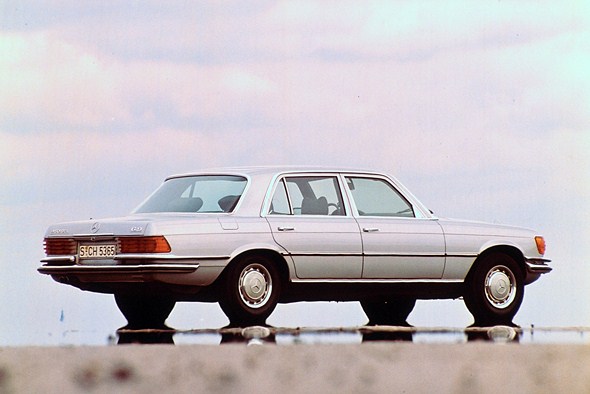 The interior was fitted out with the discreet luxury of the automotive top league. Leather-covered seats were an optional extra, for instance – the standard seat covers were made of quality velour.

The car was popular among customers employing a chauffeur, hence great store was set by the comfort of the rear seats. Electrically adjustable rear seats and seat heating were optionally available. 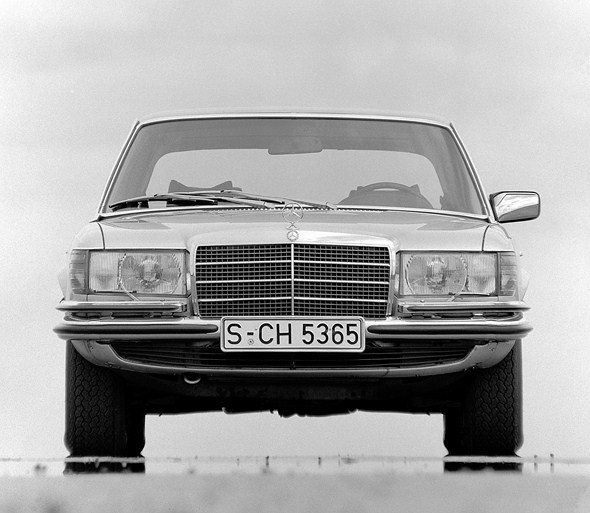 Reading lamps in the rearmost roof pillar enabled passengers to go through their files on long journeys, or to relax reading an entertaining book after a long working day.

The same level of comfort was lavished on the person at the wheel, who also benefited from the standard-setting ergonomic design of the cockpit.

All occupants were pampered by the hydropneumatic suspension, a standard feature on this car. The much-quoted comparison with a “sedan chair” is acceptable here by way of exception: a more comfortable ride would hardly have been conceivable, also at high speed.

The list of options also included an item that was still a great rarity in the 1970s but available from Mercedes-Benz as a matter of course: a car phone. It cost around DM 18,000 – money that would have bought two small cars at the time.

This abundance of comfort had not come about by coincidence. The 450 SEL 6.9 derived its genes in part from the 600 (W 100 series) – some of the 600’s outstanding engineering features were also made available for the S-Class flagship, among them the V8 engine.

The latter had, however, been thoroughly revised it that it had been given a larger displacement for greater power, a new engine management system and more effective dry-sump lubrication. 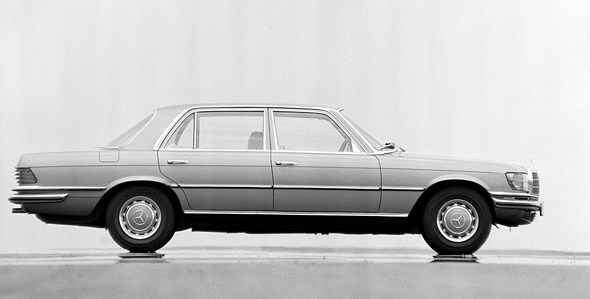 The engine’s power was transmitted to the road by a three-speed automatic transmission which received nothing but top marks in contemporary test reports.

Its characteristics were perfectly matched to the powerful engine, with outstanding acceleration being on tap when required but excelling first and foremost in smooth cruising.

The 450 SEL 6.9 was, after all, frequently driven over long distances by its buyers. A 96-liter tank gave the car an adequately large range.

From 1978, the 6.9 was also available with the anti-lock braking system (ABS) – a safety system that made its debut in the Mercedes-Benz S-Class and once again moved the series into the top league of innovative engineering.

A total of 7,380 units were built until 1980, and most of these were exported to the USA. This volume figure looks rather small at first glance, but one mustn’t forget the car’s belonging to the top luxury segment where production figures are seen in a different light. And the 6.9 was, after all, not the only S-Class model. 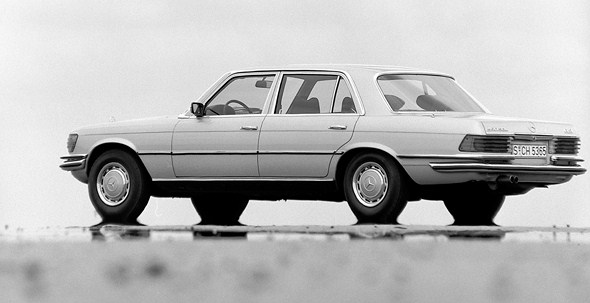 The 6.9 with its formidable engine was acquired by politicians, industrialists and show stars from all over the world.

Quite of few of these did indeed go for the highest levels of luxury but preferred to wear the fur on the inside, so to speak: many 450 SEL 6.9 units were ordered with option 261, omission of the displacement figure on the trunk lid. Which meant that the model was identified by the initiated only by its wide tires and larger tailpipes.

Luxury lies in the finer nuances at times. 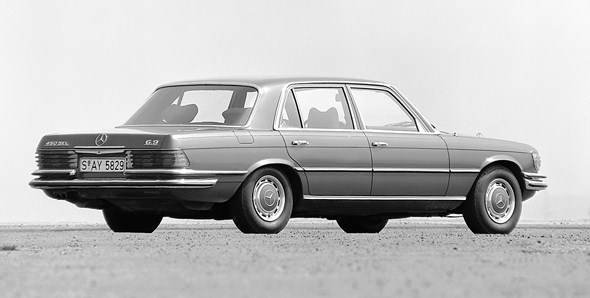 Automobil Revue, Switzerland, May 15, 1975:
“It is highly gratifying to see that at a time like this, a car appears that offers the highest levels of motoring enjoyment to the connoisseur – at all speeds. The 6.9 bears witness not only to the confidence those responsible have in the future but also to their courage to stand up for their beliefs.”

Car, England, June 1975:
“A car of such speed and weight must have demonstrably good roadholding and handling, and this one is no disappointment in anything from a hairpin to a three-figure bend: the suspension soaks up the bumps, the transmission is wonderfully smooth and admirably easy to control (either by a sensitive accelerator foot or a hasty hand at the lever), and the steering is servo-assisted in a way that highlights the nearly neutral responses of the vehicle.”

auto, motor und sport, Germany, no. 21/1975:
“In measurements carried out by auto motor und sport on this, the most powerful German sedan, we recorded acceleration from standstill to 100 km/h in 8.2 seconds and 28.8 seconds for one kilometer from a standing start.

We also registered a top speed of 234 km/h. While these figures are highly remarkable in themselves, the way in which they are reached in the perfect interplay of engine and automatic transmission is even more astounding.

Notwithstanding the car’s weight, the overwhelming power of its quiet and smooth engine generates the highest levels of comfort and motoring pleasure.”