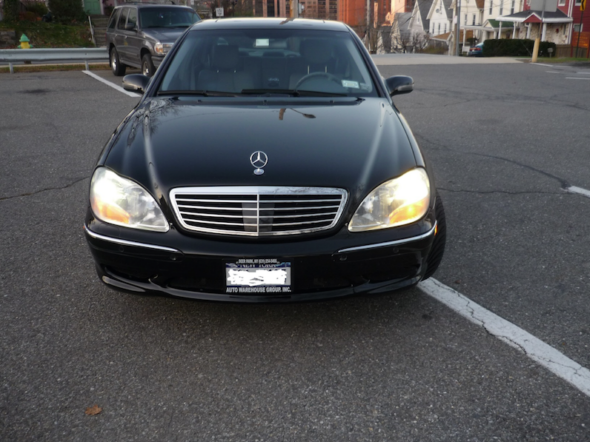 So I’ve had this 2001 S55 AMG for about a month now, and I want to write up a little review of it – since you often find more information about the 2003 and up supercharged models and not as much on the 01/02.For reference, I have close to 100k miles, Obsidian black (197) exterior, and gray nappa leather interior. I’ll discuss issues and experiences I’ve had with it too. 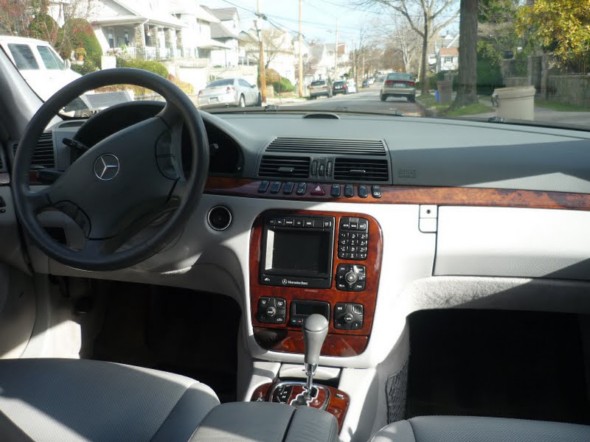 Originally I wanted a black interior – but the nappa grey leather looks great too, and is a nice contrast. The seats are extremely comfortable, and you can adjust them all sorts of ways. They also have heating and cooling, and a pulse massage feature. This pulse feature I find a little bit weak, you can notice it but it isn’t that useful – the heated seats are really nice though.

The rear seats are fantastic – very roomy, and comfortable. No complaints there. The rear climate control is neat, and the fold-down vanity mirror is a nice touch. This car has the rear power seat option too, so they recline and move! Side window and rear sunshades as well – I have my windows tinted so I don’t need these as much.

The visibility is awesome! You have a really clear view ahead of you, although to the back there are some blind spots. This is helped out by the parktronic – I find this feature incredibly useful as I usually have to exit a driveway that has some tight spots, so it let’s you know what is around and beeps before you hit anything.

Distronic is pretty cool too – at first I was a bit afraid to use it, but after a while you start to trust and learn how it works. I’ve used it on long trips on the highway, that way you can rest your foot, keep your attention on the road, but have the backup radar controlled system to help you out. It’s cool that you also get a red flashing warning on the panel if you come too close to hitting a car, even if the distronic is off. Nice “Attention assist”, sort of what is like on the newer cars.

The command system is interesting. I bought updated GPS disks for 2009, cost $275 plus tax. The GPS system is definitely a bit outdated and takes a little getting used to, but I do like it – it does the job and is nicely integrated in the car’s controls. The CD changer is good, but it does not play MP3 CD’s so you are stuck with regular audio cd’s that fit less music.

Unfortunately the phone system in the car is outdated. To get it up to date with bluetooth, it can cost up to $1,500. Not sure if that’s worth it, I have not done it and use a bluetooth earpiece. I also installed satellite radio, which is also a bit difficult because this car does not have an AUX input – thus you either use the tape deck, or try to hard wire it to the radio with am FM adapter, which I’ve been told works but have not done it myself.

Otherwise, a beautiful and well made interior. It’s in very good shape for a 2001, and most people think it is a 2005 or newer car! (Most “regular non car” people.) I also hard wired an Escort 9500xi radar detector – very useful! 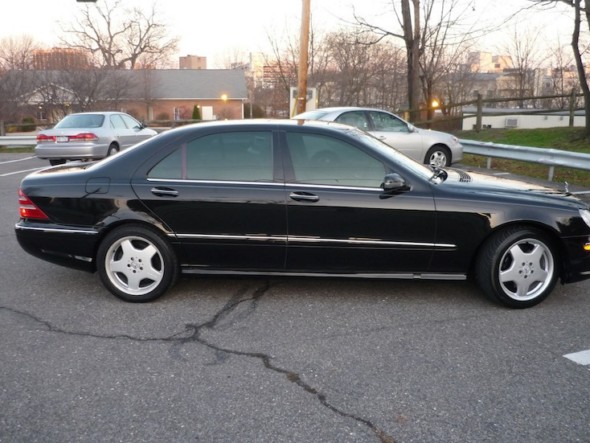 This is one good looking car. The AMG body kit really sets it off. The thick rear tires give it an aggressive back stance, and the twin pipe AMG tips look great. I personally would not want to change the rims – I love that AMG original look. The only thing I did was give it a 35% tint, otherwise it is a stock look. I like that much more, I think these S55’s are really handsome cars -and no need to update them to a “2003” S55 look. Sure, some people may mistake them for falsely badged S500’s due to not having quad exhaust, but I think the bodykit, rims, and engine sound give it away that it’s a real AMG!

I had it detailed, as the paint had some swirls and minor scratches. The works – clay, wax, interior shampoo, etc. 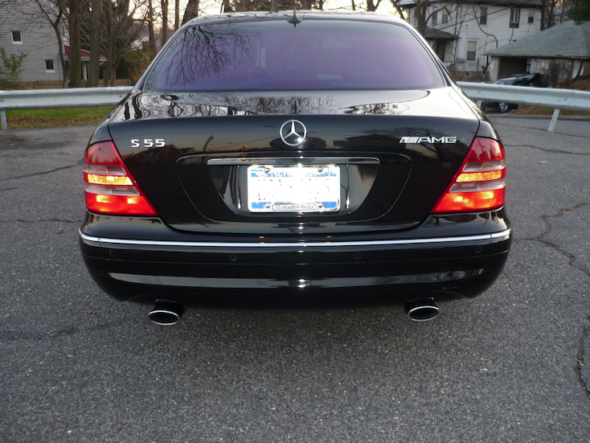 Ok, so now my personal driving experience with it. Before I bought this I knew I definitely wanted an AMG, and originally was going to go for a CLK55 AMG which uses the same engine, but is much lighter and thus faster. The S55 AMG is just such a nicer car overall though, that I can sacrifice a little bit of performance for what this car brings.

The throttle is always “alive”. Even at slow speeds, a little light push and you hear the engine’s quiet roar like a starting tornado – and if you floor it at slow speeds with a kickdown (the small button behind the accelerator pedal) the car throws you back and just flies. For sure, this is not a slow car. It’s fast. It may not be as fast as the newer S55’s and S63’s – but it is still a very quick and powerful car, and extreme fun to drive. You definitely get tire spin if you floor it from a light a lot of times. That engine noise is fantastic!

On the highway, it is very quiet and tranquil. It gives the illusion that you are going at a slower speed than you really are – for example, if you kickdown at 80mph, the sensation of speed going forward is best expressed by looking at the speedometer quickly going up, because the ride is so quiet that otherwise you don’t feel it as much.

The steering is very light and responsive – and if you hit the ABC sport button, everything firms up a bit (suspension too) and the car has even less body roll, and responds very well for a car weighing over 4,000lbs. 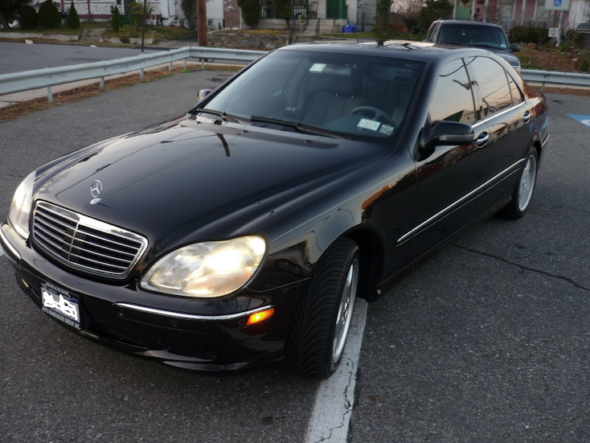 The car is amazingly well conserved and built with quality – and the only issues I’ve had to deal with are regular wear and tear items that I knew I would have to address since the car has high mileage.

First – I replaced the front lower ball joints and control arm bushings, since they worn down with time. I replaced the rear rotors and pads, and just did other preventive maintenance like oil, cooling flush, brake flush, new spark plugs, etc. The headlamp washer nozzles were missing as well, and that caused a leak – but as soon as I replaced it, they worked perfectly and the leak went away. So aside from this regular maintenance issues, the car is great!

Here is part 2 of my 2001 S55 AMG review, since I’ve had the car a bit longer and have a lot of new stuff to share. Heh, this is definitely a car that likes warranty, but unfortunately due to the mileage it’s tough to find one! It’s not an easy or cheap car to maintain, but I believe that if you take great car to do everything preventively and accurately with its maintenance, it won’t give you any problems down the line that are too expensive.

1.) Reliability, maintenance, and other issues:

Car currently has 118,700 miles, and I drive often 3,000-4,000 miles a month. The reason for 2 oil changes within a short period was that in the first Mobil 0W30 was used, and I learned that 0W40 is the best for these cars and so I decided to switch, about 4k miles later and had it done at the Mercedes dealer.

This is everything I have had done to the car since I bought it in November:

Explanation of above items:

The majority is just preventive maintenance, but some issues needed more urgency.

3.) Replace Ball joints/control arm bushings: The car was fine, and one day I took it to higher highway speeds, and heard a metallic side from the front right side. The car then started creaking a good deal at slow speeds and uneven surfaces. Took it to get it looked at, and the car’s ball joints had a lot of wear and the bushings were torn. Got it replaced, and the problem stopped and the car was as good as new.

5.) New rear pads and rotors: My old pads and rotors would make a clunk sound when I reversed. The previous owner had not used OEM pads, and had used aftermarket – thus they were a bit smaller and would hit the calipers, so I needed to change them plus they were already very worn.

13.) New motor/transmission mounts and power brake vacuum hose: This one was interesting. So I start to hear this “clunking” sound in my engine bay area when I accelerate from a stop. The clunk and movement was so abrupt that it even knocked out my air intake tube from its slot. Finally, I accelerate and bam – the entire car just starts to shake.

So the motor mounts broke, and torn off the brittle power brake hose. This caused a vacuum in the engine area, and the car would shake. The brake would not work anymore, so I had to have the car towed. Result: New mounts for the motor and transmission, and new power brake hose fixed the shaking and the car was back to normal.

15.) The transmission flush was to fix a leak in the 13 pin connector, which is common on these cars. I was leaking fluid in my driveway, a pink-like fluid, so I got that fixed. Was fairly cheap and definitely worth it. Also had the oil cooler resealed and got a new serpentine poly v-belt in, since the old one had some oil from the leaking oil cooler.

The cabin dust filter and engine air filter are extremely easy to do yourself. I bought the parts from Mercedes (They are pretty cheap) and did it myself. My dust filters were absolutely dirty, with old leaves and almost black. I don’t think the last owner changed them for years. 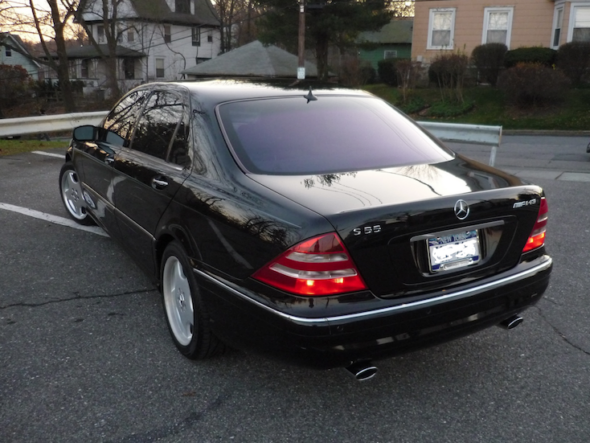 This is what I need for the near future in terms of maintenance that I have not yet done:

Otherwise, the car drives beautifully. Very powerful – I definitely like to accelerate it a good bit, and it does the higher speeds wonderfully and without any issues – very stable. The brakes do start to squeal a bit after intense stop/go especially at higher speeds – but they cool off and go back to normal fairly quickly.

After a few more months with the car I’d do another little update! I figure this can be helpful to people with w220’s, especially the older S55’s since there is less written about them. 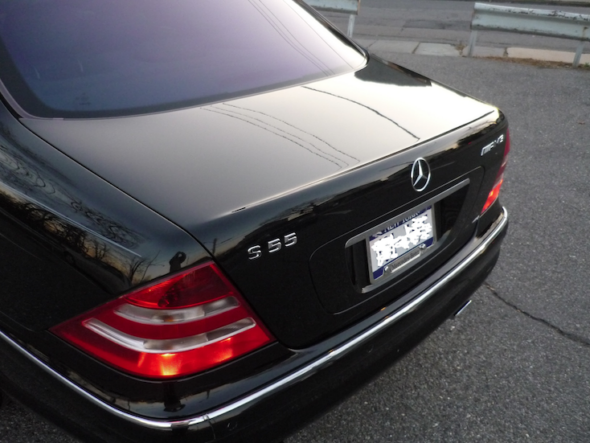