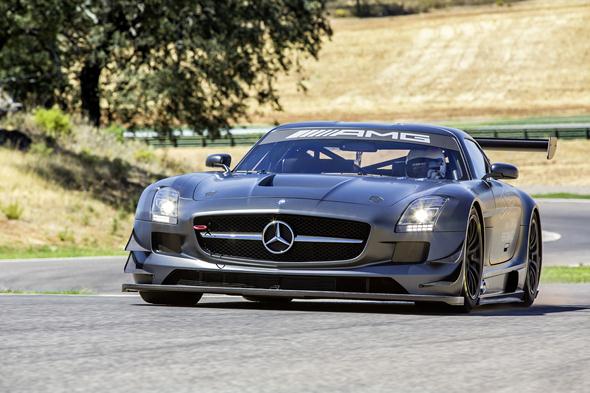 São Paulo (Brazil)/Affalterbach – World premiere for the new SLS AMG GT3 “45th ANNIVERSARY” at the 2012 São Paolo International Motor Show: the exclusively appointed special series is aimed at car collectors with a particular penchant for motor racing. The customer sport racing car is being built by hand in a limited edition of no more than five vehicles in Affalterbach. Record DTM champion and AMG brand ambassador Bernd Schneider is involved hands-on in the production process, installing the AMG 6.3-litre V8 engine in the SLS AMG GT3 “45th ANNIVERSARY” together with an AMG engine fitter. 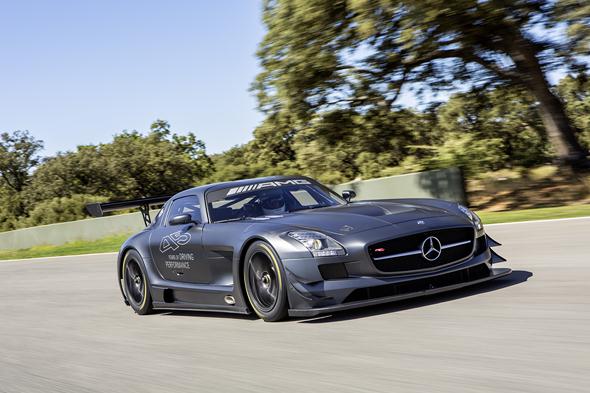 The exclusive collector’s item is also synonymous with the successful AMG customer sports programme. With a current tally of 36 wins in the 2012 motorsport season and three driver and team titles in the FIA GT3 European Championship, the ADAC GT Masters and the FIA GT1 World Championship to its name, the racing version of the gullwing model from Mercedes-AMG is also an impressive success story in its own right. 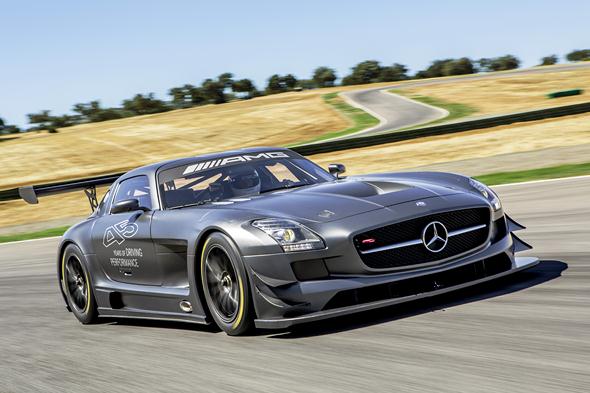 “The world premiere of our special “45th ANNIVERSARY” series of the SLS AMG GT3 at the 27th São Paulo International Motor Show in Brazil is a homage to all Brazilian AMG fans. Firstly because the Brazilian market has witnessed rapid growth for AMG high-performance vehicles in the past five years. 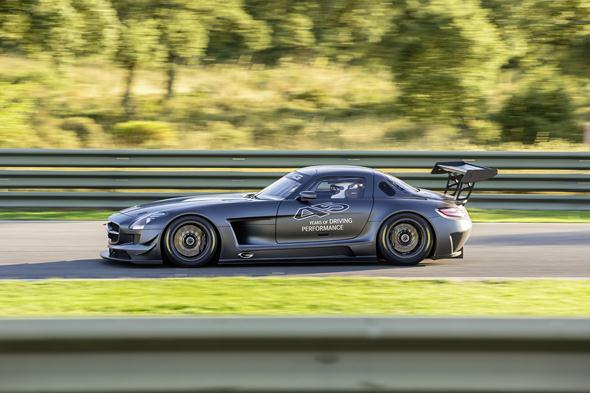 And secondly because two of our AMG customer teams are putting in a very good showing in the Brazilian GT Championship and have excellent prospects with their three SLS AMG GT3s,” notes Ola Källenius. 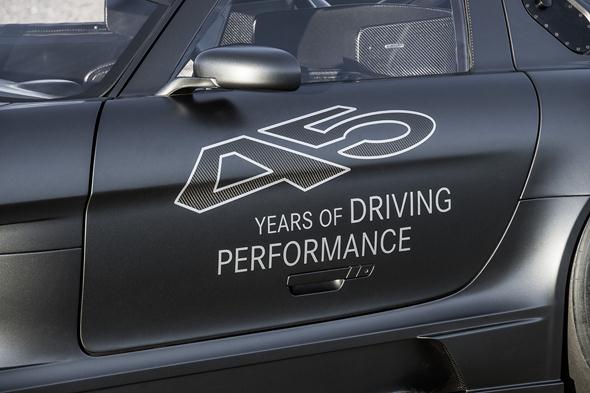 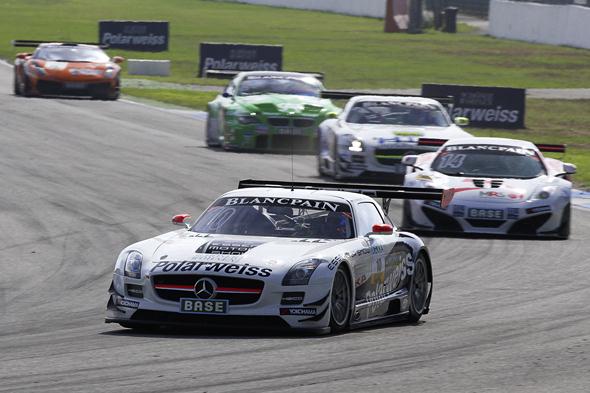 To date, this matt paintwork has been exclusive to the SL 65 AMG “45th ANNIVERSARY”, which was unveiled to mark the 45th birthday of Mercedes-AMG at the New York International Auto Show in April 2012. The AMG light-alloy wheels in designo magno graphite complement the body’s matt paintwork to perfection. 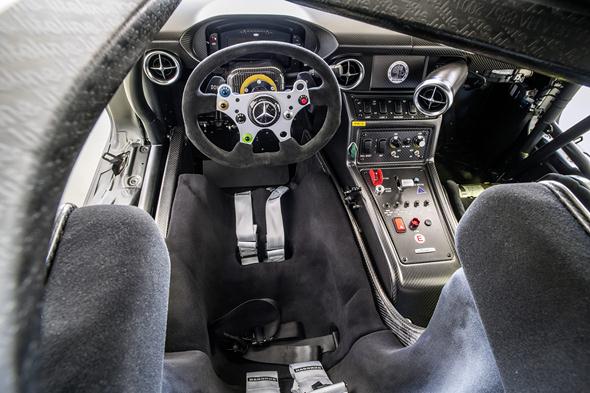 Another eye-catching feature is the striking “45 Years of Driving Performance” logo framed in silver on the GT3 racing car’s gullwing doors. The special edition’s logo embodies consummate design right down to the finer points of detail: closer inspection reveals the exposed carbon-fibre structure of the gullwing doors under the matt paintwork. 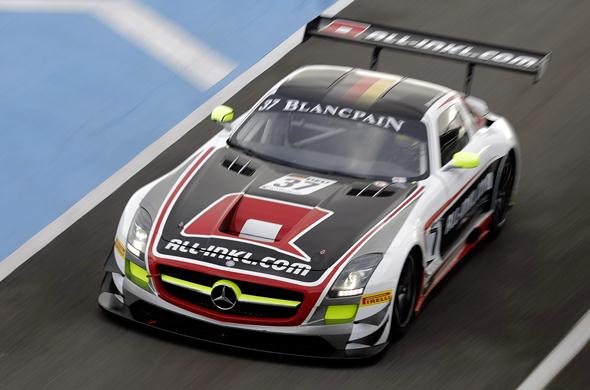 The collector’s item also boasts a seat shell in a high-strength carbon-fibre safety cell on the co-driver’s side. A special badge with a “1 of 5” logo on the seats alludes to the limited production run for this racing car. The standard appointments for the SLS AMG GT3 “45th ANNIVERSARY” are rounded off by a high-quality AMG indoor car cover with “45 Years of Driving Performance” logo. 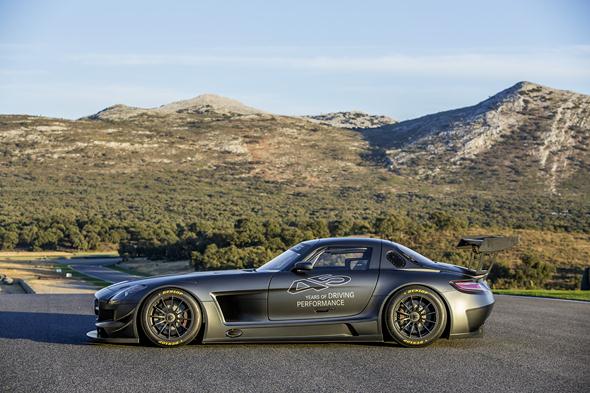 Bernd Schneider as a VIP engine fitter
In keeping with the exclusive exterior and interior equipment and appointments, the engineering under the bonnet is of a similarly exclusive standard. 48 year-old racing driver Bernd Schneider is assisting the responsible AMG engine fitter in installing the naturally aspirated AMG 6.3-litre V8 engine. 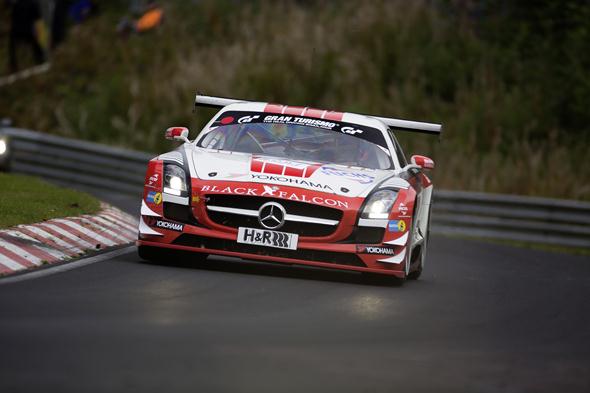 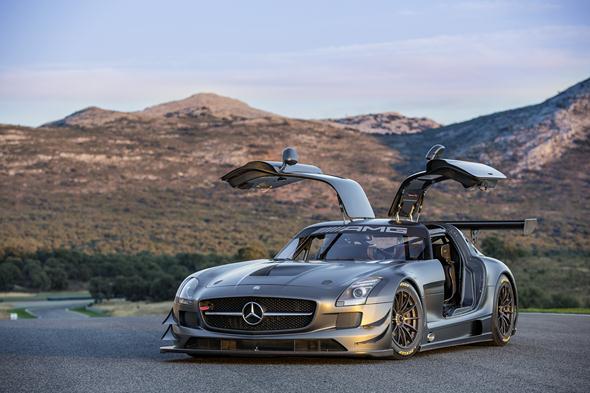 The five-times DTM champion, overall ITC winner from 1995 and FIA GT world champion from 1997 works for Mercedes-AMG as a brand ambassador and an instructor at the AMG Driving Academy. Together with AMG customer sport coordinator Thomas Jäger, as an established expert in the field of SLS AMG GT3 customer sport Bernd Schneider has carried out the majority of the test drives for the racing version of the gullwing model. 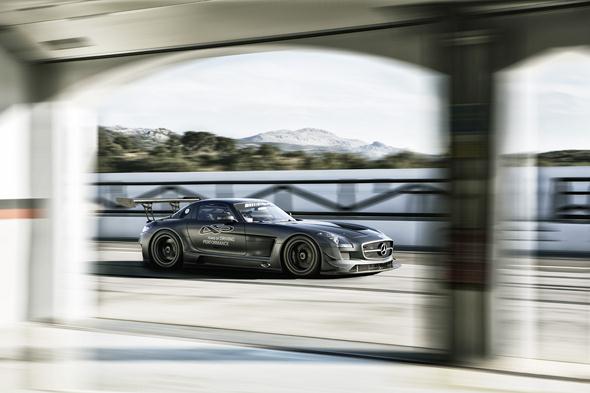 He also participates in selected races as part of the AMG driver support set-up. Bernd Schneider competed for various AMG customer teams in 2012, including the 24-hour Dubai race, at the Nürburgring and in Spa-Francorchamps.

Vehicle handover directly at AMG headquarters
Handover of the SLS AMG GT3 “45th ANNIVERSARY” takes place directly at Mercedes-AMG in Affalterbach, where customers are also granted exclusive insights into the AMG world and have an opportunity to sample AMG’s hallmark excellent service and support quality. 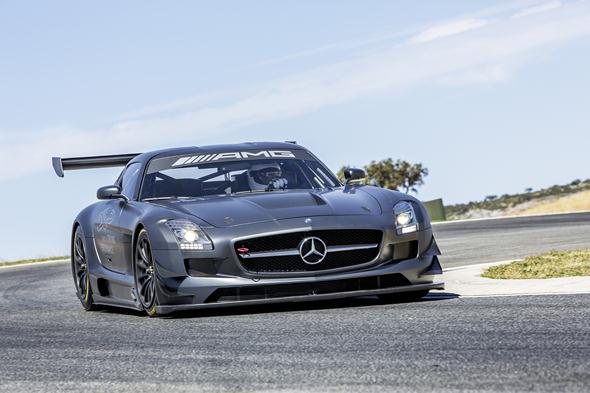 An in-depth introduction to operation of the new vehicle and its engineering and technology is provided in the new 360 square-metre handover hall. In the case of this special GT3 racing car, this instruction is provided personally by AMG brand ambassador Bernd Schneider.

The programme also includes an individual tour of the factory, taking in the AMG Performance Studio, where exclusive series of individual AMG cars and one-off vehicles are developed and hand-made. This is followed by a visit to the AMG engine “Manufaktur” (hand-finishing section), where Bernd Schneider and the AMG engine fitter assembled the AMG 6.3-litre V8 engine by hand. 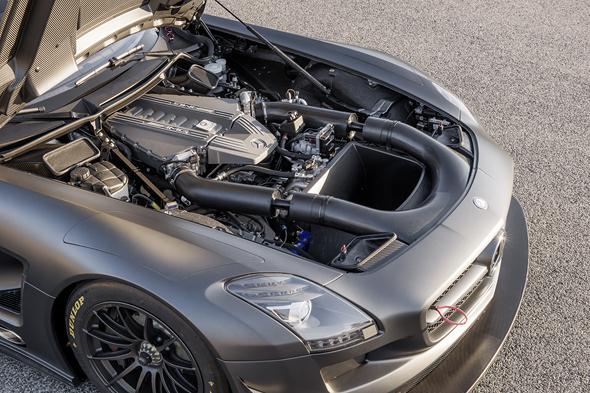 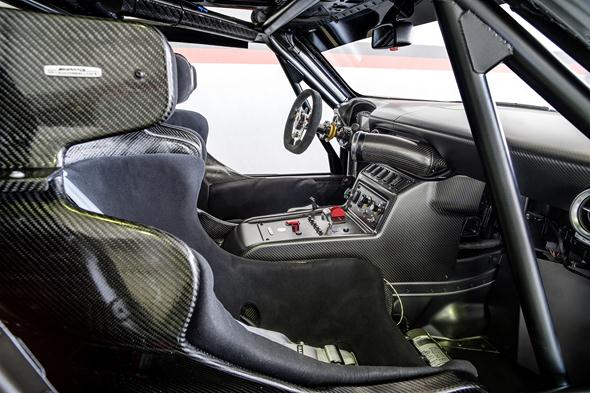 Their stablemates Vanuê Faria / Renan Guerra (both BRA) rank third. Paulo Bonifacio and Sérgio Jimenez (both BRA) from AMattheis Motorsport currently hold fifth place in the championship. The next race in the Brazilian GT Championship will take place on 28 October and the final meeting will be in Interlagos on 16 December. 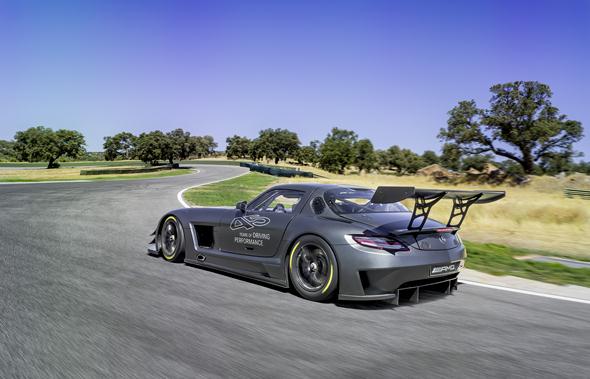 Success on four continents, exemplary safety standard
The Mercedes-Benz SLS AMG GT3 is the racing version of the SLS AMG which has been designed for customer sport. 49 such vehicles for short- and long-distance races have been delivered worldwide to date. In its first season in 2011, the gullwing model quickly established itself as the most successful newcomer of the motorsport year. 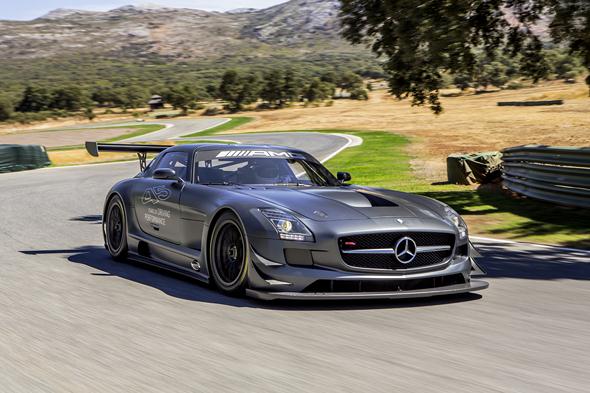 International customer teams competing on four continents notched up a total of 26 wins. The vehicle’s successful run was crowned when HEICO Motorsport won the team rankings at the FIA GT3 European Championship with its two Mercedes-Benz SLS AMG GT3s – the first title for the gullwing model in its first full racing season. 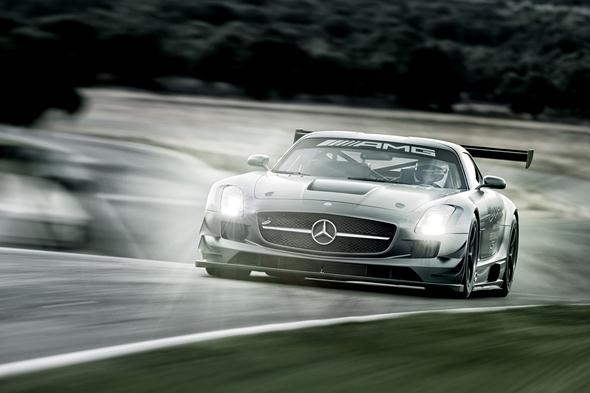 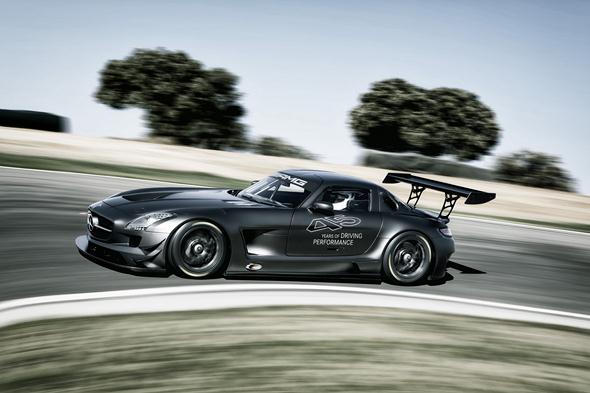 The triple victory in the 24-hour Dubai race in January 2012 and numerous places on the podium at various short-distance, 4- and 6-hour races demonstrate the SLS AMG GT3’s sporty performance in impressive style. So far this season, the car has notched up 36 wins. 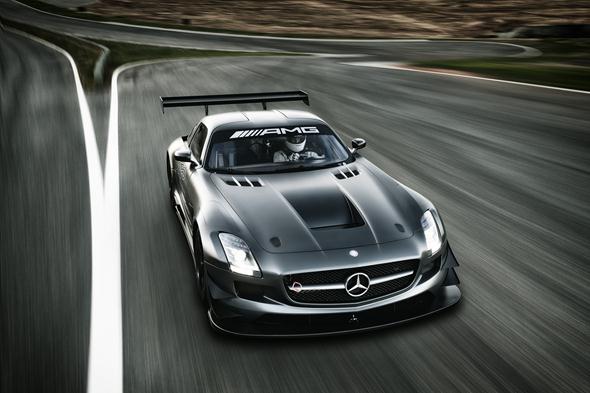 The SLS AMG GT3 additionally offers an exemplary standard of safety which is currently unrivalled by any other GT3 vehicle. Mercedes-AMG develops and produces the customer sport racing car in close cooperation with HWA AG. HWA is responsible for development and deployment of the Mercedes AMG C Coupés in the DTM on behalf of and in ongoing consultation with Mercedes-Benz Motorsport. 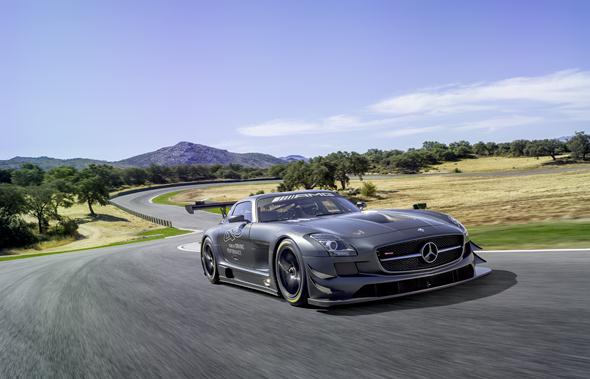 “60 years of the SL”: double victory at the 3rd Carrera Panamericana in the 300 SL racing sports car