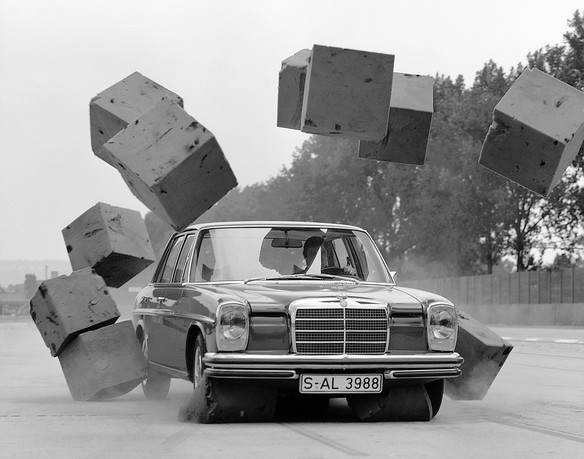 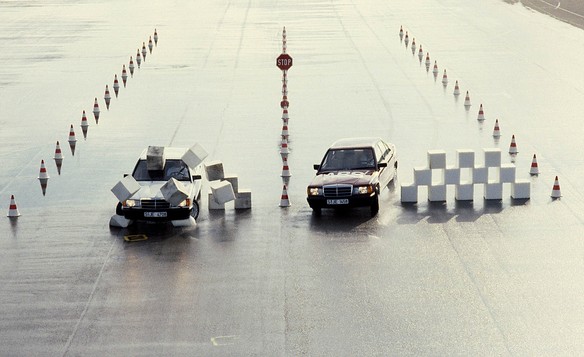 In December 1970, Daimler-Benz introduced a technical innovation of groundbreaking significance to the international public: the first-generation anti-lock braking system. Wheels which do not lock in emergency braking maneuvers – the dream of all automotive engineers endeavoring to improve handling safety substantially and, above all, to retain the vehicle’s steerability during emergency braking. However, the road to success was a long and difficult one. It was not before 1978 that ABS became available in large-scale production cars. 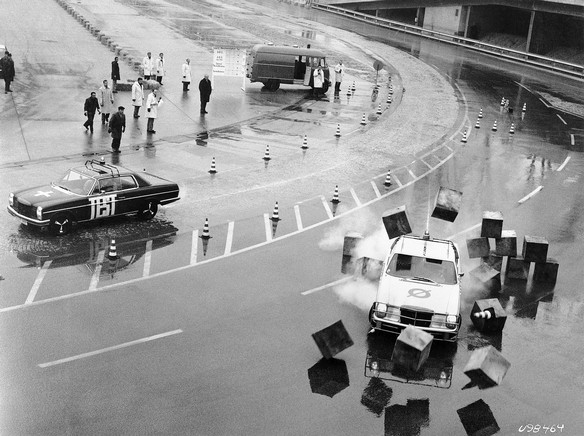 As early as 1920, the French automotive and aircraft pioneer Gabriel Voisin had been using a hydraulically operating system to prevent wheel lock. In 1928, German Karl Wessel was granted a patent on a brake power regulator for motor vehicles but did not get beyond the drawing-board stage. In 1936, Bosch filed a patent for a “device for preventing the locking of a motor vehicle’s wheels under braking,” but this design was not taken any further than the test stage. In 1941, an anti-lock regulator was tested with “modest success,” as the “Automotive Engineering Manual” stated succinctly. 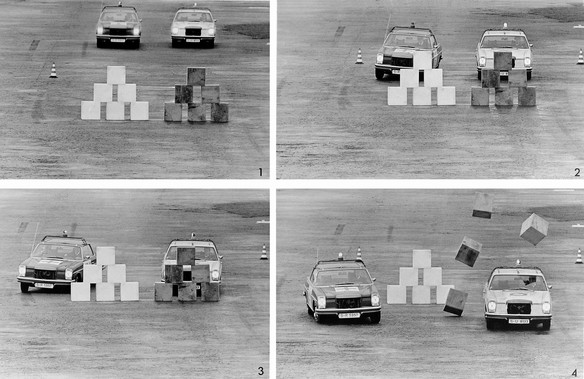 However, these first practical tests pointed the way: an anti-lock braking system must have sensors to measure the rotational speed at each front wheel. A control unit registers and compares the measured values – and corrects excessive deviations by controlling the brake pressure at each wheel individually until immediately before wheel lock.
[adsense]
Transfer to the road proved to be much more difficult than expected, however. While appropriate sensors already worked satisfactorily as early as 1952 in so-called anti-skid systems on aircraft and from 1954 in “Knorr wheel slide control” systems for railways, a great deal more was demanded of mechanical friction sensors in cars. They had to be capable of registering the deceleration and acceleration of the wheels, of working reliably while cornering and on rough ground, and of operating faultlessly even when heavily soiled and at high temperatures.
In 1961, a mechanical system acting on the central differential and derived from the Maxaret system used in aircraft production was installed in the Ferguson P 66; a complex mechanical system operated in the Ford Continental Mk III of 1968 as well as in the Jensen. The engineers at Daimler-Benz had been monitoring the use of mechanical wheel-lock preventing systems since the late 1950s but had to recognize in their own test series that these systems were inadequate for road traffic as they reduced the brake pressure evenly at all wheels. 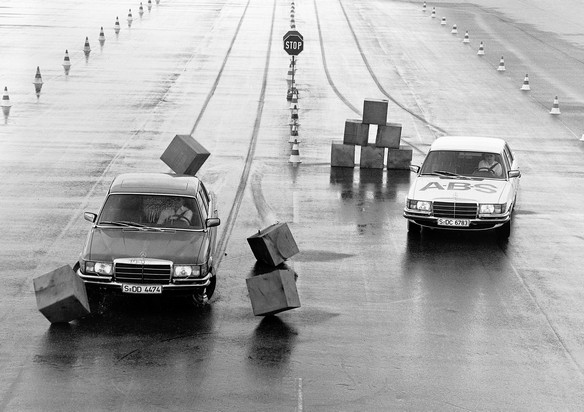 Induction rather than mechanics
The problem occupied the engineers not only at Daimler-Benz but also at Teldix GmbH, an affiliate of German company Telefunken and American company Bendix headquartered in Heidelberg, Germany. Their aim was to control each wheel individually to make full use of the existing tire-to-road friction in each case. The basic idea was to calculate imminent wheel lock from wheel speed and wheel acceleration and then to control the brake fluid pressure at each individual wheel. The first proposals concerning the measurement of wheel speed and acceleration involved very large mechanical sensors which were difficult to accommodate at the wheels or wheel hubs, and which were pressed against the brake discs like bicycle dynamos. These sensors were complemented by a simple electronic control unit and a hydraulic control block with fast-acting solenoid valves.
At the time, electronics still worked on the basis of analogue technology which was relatively susceptible to failure – the progress made in the development of digital technology was still rather modest. In spite of this, Daimler-Benz introduced the first-generation anti-lock braking system for passenger cars, trucks and buses to the international public on the test track in Untertürkheim on December 12, 1970 – and automotive experts and trade press responded with enthusiasm. The principle was found to be convincing. 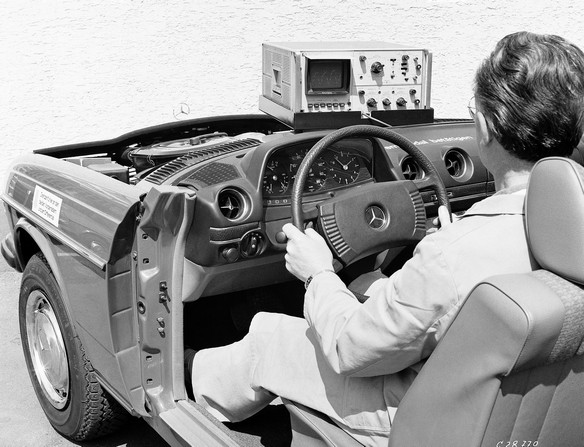 The road to ABS for large-scale production
Another eight years passed, however, before Daimler-Benz was able to offer a reliably functioning anti-lock braking system for large-scale production vehicles. This period was necessary to develop the engineering to full maturity and absolute reliability. In the process, the engineers benefited from a revolution in electronics: at last, digital technology permitted the production of small and robust computers which recorded the wheel sensor data in next to no time and reliably actuated the valves for regulating the brake pressure. The wheel sensors had also been simplified significantly, permitting the contactless transmission of signals from which the electronics calculated the acceleration and deceleration of the wheel.
The development of the first digital control unit for test purposes by development partner Robert Bosch GmbH took five years. This second-generation ABS at last ensured the unrestricted steerability of the vehicle even under emergency braking, thereby rendering a significant contribution to active safety. 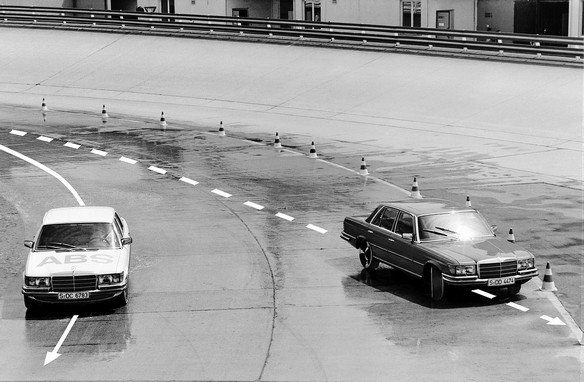 1978: The world’s first standard-production ABS
In August 1978, Mercedes-Benz was the world’s first motor manufacturer to officially introduce the new ABS. In December 1978, ABS became optionally available, initially in the S-Class at an extra charge of DM 2,217.60. Before long, it also became available for the other model series. In 1984, ABS became standard on Mercedes-Benz passenger cars for the first time. Ten years after the launch, as many as one million Mercedes-Benz cars equipped with ABS were already operating on roads throughout the world. 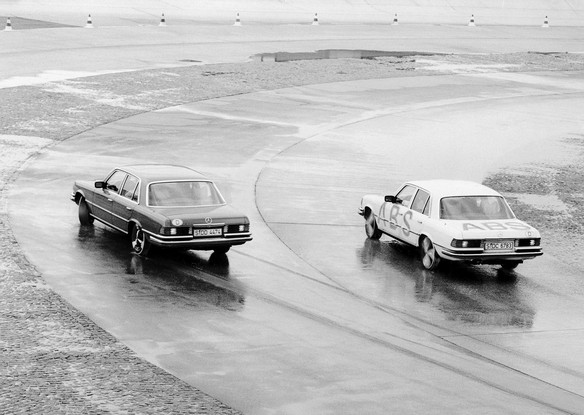 Mercedes-Benz also adopted a pioneering role where commercial vehicles are concerned. As early as 1981, ABS, developed together with Messrs. Wabco, was offered for compressed-air brakes. Since 1987, ABS has been standard on all touring coaches and since 1991 on all trucks. In late 1990, ABS was also incorporated in the racing cars Mercedes-Benz entered in the German Touring Car Championships. 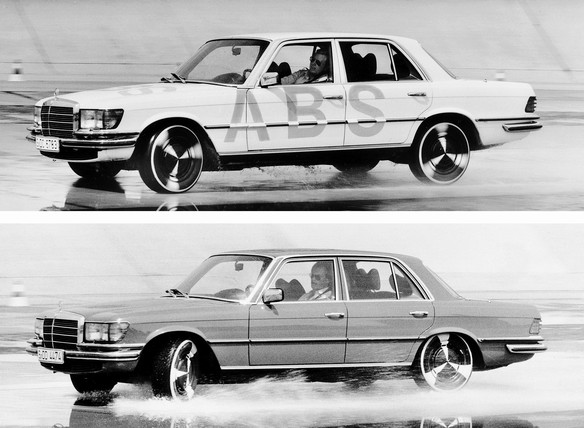 In the years to follow the motto was: smaller, lighter, more efficient. In 1989, the developers succeeded in fitting a hybrid-design control unit directly to the hydraulic unit, thereby dispensing with complex connections and reducing the weight of the ABS 2E generation. After that, additional functions were added, among them electronic brake power distribution which replaced the mechanical brake pressure reducer on the rear axle. The eighth ABS generation currently in use was introduced in 2001. It features a modular structure, permitting a single product family of brake control systems in different configurations: ABS, BAS, ASR and ESP. 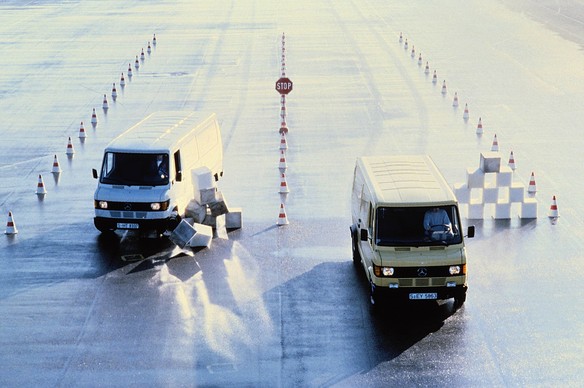 Basis for innovations
ABS served as the basis for the development of additional systems. Building upon ABS, acceleration skid control (ASR, start of large-scale production in 1981) was developed to control the interplay of the longitudinal forces between tires and road surface not only under braking but, for the first time, also under acceleration by acting upon both the brakes and the engine torque. This was followed by the automatic locking differential (ASD, 1985) and the innovative permanent four-wheel drive 4MATIC (1985). What all these systems have in common is the recording and limiting of wheel slip by means of advanced micro-electronics and hydraulics with the aim of improving the so-called longitudinal dynamics of a motor vehicle. The ABS signals are equally used by the Brake Assist (BAS, 1996), the revolutionary Electronic Stability Program (ESP, 1995) and the electrohydraulic Sensotronic Brake Control system (SBC, 2001).
On Mercedes-Benz passenger cars, the wheel sensor data is additionally processed by less conspicuous functions, for instance by the electronically controlled automatic transmission which adapts to the driver’s wishes, by the Auto Pilot System, the trip computer, the DISTRONIC autonomous intelligent cruise control, the engine and wind-shield wiper control systems and several other onboard systems with speed-dependent control. 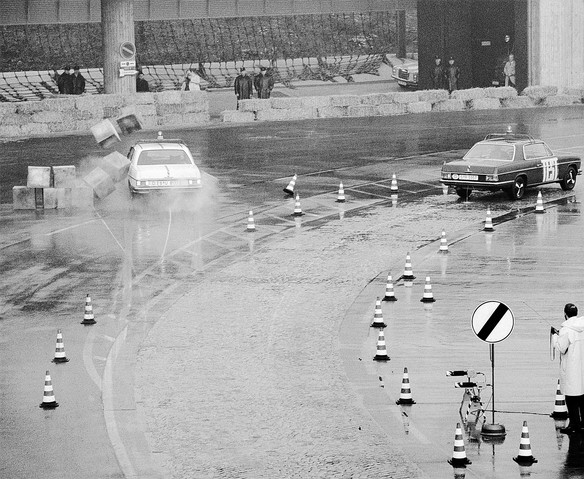 Today, the anti-lock braking system is a matter-of-course item of equipment of virtually all vehicles from a large number of automotive brands throughout the world. We owe this to the untiring commitment of a large number of engineers and technicians at Daimler-Benz and its cooperation partners Bosch, Teldix and Wabco, who worked hard to find the best solution for this engineering feature which improves handling safety, contributes to avoiding accidents and even saves lives.
Heinz Leiber, former head of ABS development at Daimler-Benz and therefore known as the “Father of ABS”, has this to say: “Mercedes-Benz and its anti-lock braking system were also precursors in the development of digital electronics suitable for use in motor vehicles.” 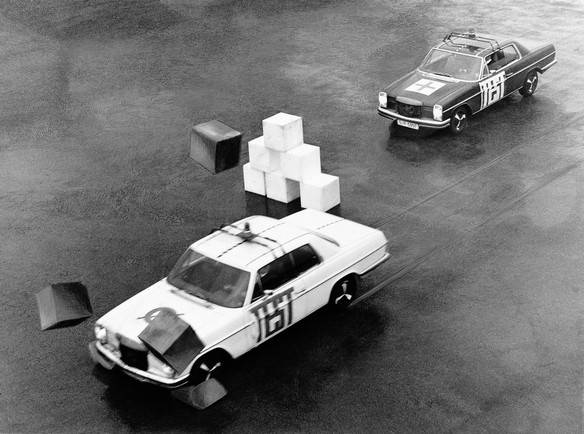 Merry christmas to you all!