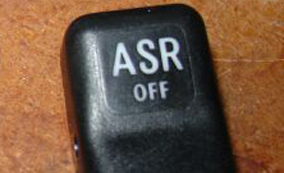 The Automatic Slip Control prevents rear wheel slip and swerving under acceleration. It responds by breaking the slipping wheel and reducing the engine torque.

ASR Anti Slip Reglierung is a dedicated traction control system. This electro-hydraulic system is now flaunted in the latest vehicles to help prevent loss of traction.

The basic function of the technology is to ensure that the driven road wheels remain in control even in the face of excessive throttle and poor condition of the road surface.

The ingrained technology not only helps the driver to cope with the applied torque, but also co-ordinate and reduce the spark to one, or more than one, cylinders.

ASR Anti Slip Reglierung is not very different from the electronic stability control or ESC system that is now preferred in most modern automobiles, but it is different in the final objective.

Effective use of the ASR Anti Slip Reglierung system enables a driver to address the reduction of fuel supply to the cylinders, shut down throttle and even activate boost control solenoid to reduce engine power.

This new and highly innovative technology is a traction control system that works in conjunction with the electro-hydraulic brake actuator and the wheel speed sensors.

ASR Anti Slip Reglierung is integrated with the car’s anti-lock braking system. It functions as a safety feature in high-performance cars, greatly reducing the risk involved when road conditions cause sensitive throttle to generate spin while accelerating.

The system is especially helpful in icy, wet or snowy conditions. The technology is now an integral part of cars, minivans, and light trucks.

With timely use of ASR Anti Slip Reglierung, you can actually control the slowing down of a spinning wheel within a very brief application of brakes.

This maneuver diverts additional torque to the wheel or wheels that are not spinning and the generated traction control averts disaster.

I asked earlier on 500SEC.com the question : How to disable the ASR system.

Here´s the answer that i got. A guy from Finland contributed with it, so our very warm thanks goes out to you Antti.

You asked for how to disable the ASR-system: unplug the round connector plug in the side off the ASR-pump and the automatic failure check will force the system to go off.

The same happens if any of the plugs belonging to ABS or ASR systems are off. ABS and ASR systems use same pressure pumps and sensors so you can´t disable just the ASR; ABS will turn off also.

If you want to turn off just the ASR function, Brabus has made a special off switch for it to be placed in the middle console.

If you haven´t tuned up your SEC, it still won´t brush rubber on asphalt because of the power transmission ratio, unless of course if you want to brake your automatic transmission (=rise engine rounds to 6000 rpm on neutral and then pull drive gear on);

I´ve tested. Notify that the ASR system has a type malfunction, that is not widely recognised: if any of the wheelrotation sensorsfails, specially in front (too old, oxidized, broken), ASR might think that other wheels are rotating at different speed than the others, so the car thinks that you are in a side slide and pushes back the gas pedal with tempomat servo engine!

This is also the reason why you should never place different size tyres on the front and rear axels.

The front sensors arerather expensive to replace and they needed to be replaced in my car at 150 000 km five years ago.

Notify also that the driving shafts differ fromusual in an ASR model: new ones cost honey and they need to be replaced time to time. In my car they´ve lasted 200 000 km each.

They get tired because the ASR function forces by braking the rear wheels the hole engine power to concentrate on driving shafts, when driving on slippery surfaces.

You can self notice this by the back of the car lowering when it´s braking your rear wheels.

The forces tear the driving shafts on opposite directions when driving on slippery and unslippery surfaces, so it´s obvious that metal gets tired at use.

What I´ve learned about this I never accelerate on full power when driving far away from the nearest MB work shop.

The brake of one driving shaft has stopped my journey already two times without any previous warning signal than a great final PAM.