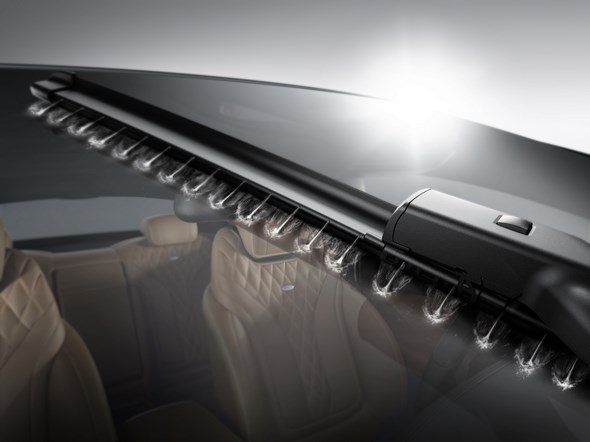 An astonishing experience: the wiper blade glides over the badly soiled windscreen of the future new SL, without a sign of a cleaning water jet, the occupants cannot see anything yet the windscreen is still cleaned!

The new SL is the first vehicle to be equipped with the high-efficiency adaptive MAGIC VISION CONTROL iper/washer system developed by Mercedes-Benz.

It cleans the windscreen without the familiar splash of water that usually briefly disrupts the driver’s field of view – something that is especially unpleasant at night or when the sun is low in the sky.

In fact, the windscreen cleaning operation in the new SL will be performed with washing water in the conventional manner.

The innovation lies in the way the fluid is conducted to the windscreen in order to clean it. This is done by means of a sophisticated system of ducts that go to the wiper blade, which is flanked by two precisely formed water channels at left and right, with minute laser-cut discharge openings.

Via these channels, the innovative Mercedes-Benz washer/wiper system always supplies washing water to the windscreen efficiently and discreetly precisely where it is needed: just in front of the wiper blade lip, according to the direction of movement of the wiper.

The discharge openings are distributed along the entire length of the wiper blade, being more closely spaced towards the outside of the blade, where it sweeps a greater area, than closer in, where the area swept is smaller.

In summer, small quantities of water are sufficient to remove a light powdering of dust. In winter the dirt mixed with de-icing salt requires a greater amount of water.

The MAGIC VISION CONTROL system not only works in accordance with the season, it also automatically adapts the wiper water quantity to the surrounding conditions, such as e.g. the ambient temperature, road speed, and the current driving situation.

If, for example, the windscreen should happen to be heavily soiled in summer, the system will automatically deliver a greater amount of water to the windscreen.

A particularly interesting feature of the SL Roadster in the Cabriolet function: when the hard top is down, the electronic control system reduces the amount of water, apart from which it demands the required water mainly on the downward stroke of the wiper arm.

This way the windscreen can be conveniently cleaned at all speeds and with open roof without any of the water spraying into the vehicle interior.

Another pleasant side effect: since the wipe water is directed specifically and well-metered to the area to be cleaned, one doesn’t douse anyone else in the surroundings with water, either.

At the end of the day, an equally good or even better cleaning effect is attained with only around half the otherwise needed amount of wipe water.

Because of this, a smaller water reservoir suffices perfectly so that it has been possible to reduce its volume by 1.7 litres compared with the preceding model. This in turn means less weight and consequently greater efficiency.

The new SL’s MAGIC VISION CONTROL wiper blades can be optionally fully heated. With this, Mercedes-Benz offers for the first time in the world and as the only automaker, a fully heated wiper/washer system.

It consists of a washer fluid container heated through coolant residual heat, electric heating for the entire hose system and as a newly-developed highlight, a fully heated wiper blade.

This effectively prevents the formation of snow on the wiper blades, so typical in winter. To do this each of the spring rails of the blade is equipped with a heater foil with an output of 35 Watts per blade.

It heats the spoiler and the wipe lip. Snow and ice cannot freeze onto the blade; it remains supple in winter, too, and cleans just as well but with reduced wiping noise.

The heating is also controlled requirement-oriented according to duration of operation and outside temperature. It is only below a temperature of minus 20 degrees Centigrade that the system makes use of the entire system’s maximum output, 270 Watts.

Between 5 degrees above and 20 degrees below zero the heating operates in an energy-saving mode and only requires the output needed to thaw out the wiper/washer system and keep it snow and ice free.

The highly efficient Mercedes-Benz-developed adaptive wash/wipe system MAGIC VISION CONTROL cleans the windscreen without causing the gush of water on the windscreen usually associated with conventional windscreen washing systems, which can briefly impair the driver’s vision.

This is achieved by means of integrated water channels along both sides of the wiper blades – one on the left and one on the right – with fine, laser-drilled spray holes.

The outlet holes are spread over the entire length of the wiper blade and are closer together on the outside than they are on the inside because the outside of the wipers have to wipe and clean a larger area.

It is the first windscreen wipe/wash system anywhere in the world to operate in this way. In cabriolet mode, i.e. when the roof is open, the electronic control system reduces the amount of water, apart from which it demands the required water mainly on the downward stroke of the wiper lip – so no water is sprayed into the vehicle interior.

It consists of a washer fluid reservoir heated by coolant residual heat, electric heating for the entire hose system and a fully heated wiper blade.

The blade’s two spring rails are each equipped with a heater foil with an output of 35 watts per blade, which heats the spoiler and the wiper lip, meaning that snow and ice cannot freeze onto the blade.

Hence the blade remains supple in winter and always cleans the windscreen effectively. The heating is also operated on demand, depending on the activation period and the outside temperature.

"The best sports car Mercedes has ever built": Mercedes-AMG GT S is the "Best Driver's Car"

Engine of the Year Awards 2015