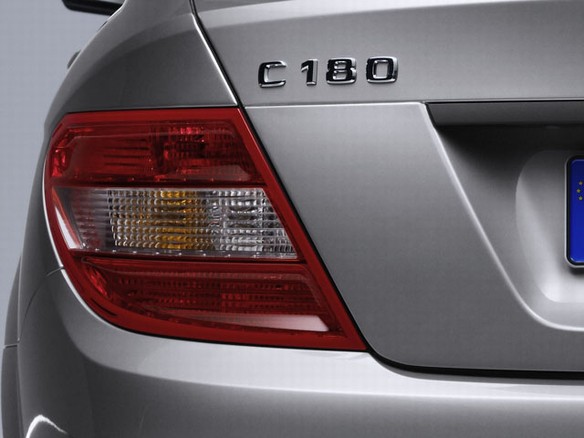 Two Mercedes patents that bring significant aerodynamic advantages are being used in the new C-Class for the very first time.
Mercedes engineers have invented innovative “ventilated tail lights” which replace conventional spoiler lips. To keep the rear window clean even in heavy rain, and ensure that the driver has a clear view to the rear, the specialists in Sindelfingen have a developed a twin rubber drainage channel in which the rainwater is collected and conducted away to the sides by the slipstream.
With a Cd value of 0.27, the new C-Class is the most aerodynamically efficient notchback saloon in its market segment. This is made possible by a number of intelligent details which measurably reduce the air resistance, and therefore fuel consumption. The innovative tail lights with ventilating slits are a good example. These replace conventional spoiler lips and therefore do not compromise the attractive rear-end design of the saloon. This technology was newly developed by Mercedes engineers and has been patented.

When the C-Class is on the move, air is sucked in from the underbody and is conducted behind the tail lights to flow out of the small ventilating slits in the lenses. As the tail lights are hermetically sealed against the vehicle body, the air is only able to escape to the side via the ventilating slits. In this way the aerodynamic specialists are able to influence the air flow along the side walls by abruptly redirecting it at the tail lights.

Without this sophisticated aerodynamic feature, the slipstream would be conducted behind the rear end of the saloon at the tail lights, causing unfavourable turbulences which negatively affect the air resistance, rear axle lift and yaw characteristics. This is prevented by the “ventilated tail lights” of the new C-Class.

Rubber drainage lip on the rear window: rainwater is sucked away

In addition to reducing the coefficient of drag during their wind tunnel tests, the aerodynamics experts at Mercedes-Benz take care to ensure that the exterior mirrors, side windows and rear window remain clear in rainy conditions, giving the driver unimpeded all-round visibility. Owing to the special air pressure distribution in the rear roof area of the C-Class, a new Mercedes patent is used here for the first time: a two-piece rubber lip as a transition between the roof and the rear window. This features an open channel and a partly enclosed channel. Owing to the pressure conditions at the rear edge of the vehicle roof, rainwater first runs towards the middle in the open channel, where suction draws it outwards. Via the enclosed channels in the rubber lip, it then flows away downwards along the window edging, keeping the window clean even at high speeds.