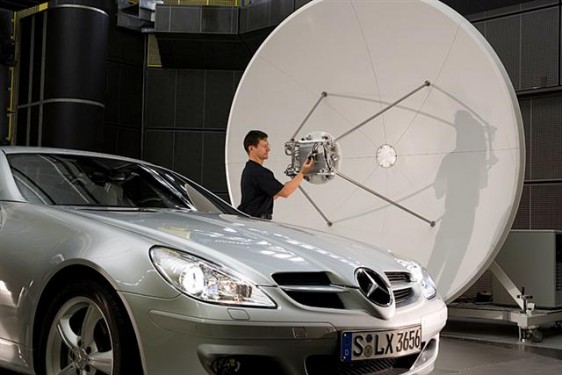 Stuttgart
The standard-specification vario-roof makes the SLK sports car from Mercedes-Benz the quietest-running model in its class. This has been proven by testing carried out in Stuttgart University’s aeroacoustics wind tunnel using a revolutionary new concave mirror measurement technique. The vario-roof’s ability to absorb wind noise more effectively than a soft-top roof means that, when travelling at a speed of 140 km/h, noise levels inside the SLK-Class are up to six decibels lower than in other roadster models. This is the equivalent of halving the audible sound.
The vario-roof is a Mercedes invention that has granted the SLK a truly unique status amongst the sports car models in its segment since as long ago as 1996. It succeeds in combining all the benefits of a hard top with the flexibility of a soft top. The fully automated transformation from roadster to coupe takes a mere 20 seconds or so: the vario-roof flips out of the boot and arches forwards before closing over the occupants to protect them from the elements. What’s more, the roof’s sophisticated technology also ensures the low noise levels that soft tops are simply unable to offer and makes the SLK-Class perfectly suited to long-distance motoring too.

This has now been confirmed by the results of wind tunnel testing, during which Mercedes engineers pioneered the use of two cutting-edge measurement techniques in unison to investigate the link between the wind noise at the roof’s outer skin and the sound level inside the car.

For the purpose of performing the aeroacoustic measurements, the experts from Sindelfingen developed a concave mirror measuring three metres high whose multitude of microphones record the noise produced by the airstream as it flows over the vehicle body positioned five metres away. This technique allows engineers to scan whole areas of the body, pinpoint interfering sources of sound as well as observe how noises spread out. A video camera positioned at the concave mirror’s focal point beams an image of the area being investigated onto a computer screen. At the same time, the system superimposes the wind noise on the video image as colours which vary depending on the volume (sound level) and frequency. Whereas dozens of individual measurements would have been required to produce similar noise analyses previously, using the new concave mirror technique just a single measurement is sufficient to cover the A-pillar, exterior mirror, side window and roof, for instance. 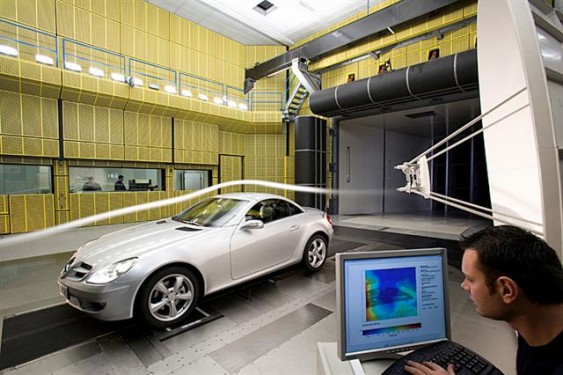 During testing, this state-of-the-art aeroacoustics measurement method was supplemented by the tried-and-tested artificial head technique: behind the wheel of the SLK sports car sat a dummy with an artificial head whose anatomically correct auditory canals are lined with condenser microphones. These special microphones allow stereophonic sound recordings to be made along with high-precision sound pressure and frequency measurements.

The analysis of both measurement techniques clearly demonstrates the positive effect the sturdy vario-roof has on the noise levels inside the SLK sports car. On the computer image produced by the concave mirror’s microphone technology, the area at driver head height – a particularly sensitive zone as far as acoustics are concerned – appears in dark blue, indicating that it is especially quiet: the wind noise here at a road speed of 140 km/h is no more than 71 – 73 decibels (dB (A)). The sound level inside the car is just as low: 73.4 decibels was recorded at the driver’s left ear and 71.2 decibels at the right ear.

There is a marked difference in the results for sports cars with a soft-top roof, with the concave-mirror measurement technique returning significantly higher wind noise readings of between 75 and 77 decibels in the aeroacoustics wind tunnel.

Interior noise levels averaged 78.5 decibels, a whole five dB (A) higher than the reading for the SLK-Class. The highest measurement for the soft-top roadsters was 79.6 decibels, over six dB (A) louder than in the SLK — the difference can be heard instantly as the audible sound is effectively doubled.

It is not just these measurements that the Mercedes engineers are interested in, however: the standard of acoustic comfort experienced by motorists is also of great concern to them. This is because there are a great many noises whose sound level reading is low but which can nevertheless be perceived as highly irritating on account of their frequencies, meaning that they have a detrimental effect on motoring comfort on long journeys. Apart from decibels and hertz, therefore, the team of experts also concentrate on a series of psychoacoustic variables which map out the subjective perception of the background noise inside the car. 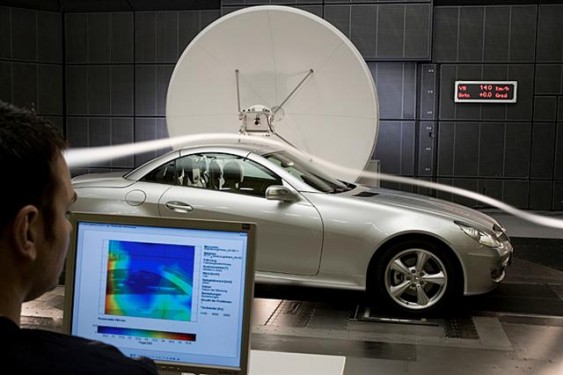 One of these parameters, for example, is loudness. This parameter is calculated based on various frequency groups, making it a more accurate measure of the volume of noise picked up by the human ear than the sound level (in decibels). The vario-roof combined with excellent soundproofing means that the loudness reading in the SLK sports car is significantly lower than in roadsters with a soft top.

A further criteria for assessing acoustic comfort is the articulation index which indicates how well the vehicle’s occupants are able to communicate with one another during the journey. A permanent, high-frequency hissing noise caused by the airstream, for example, is irksome as it makes verbal communication more difficult.

The Mercedes engineers calculated an articulation index of 45 per cent for the SLK-Class, placing it almost on a par with a coupe or a mid-range saloon and outstripping the results for other roadster models with soft tops by as much as eight percentage points