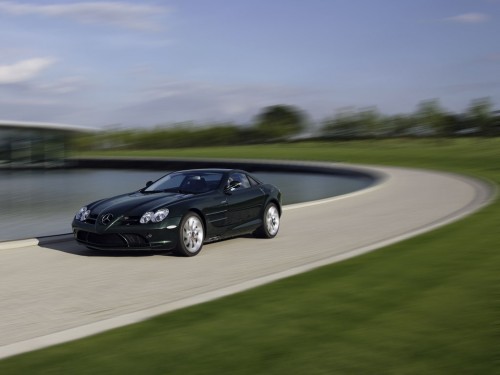 Modern-classic Mercedes-Benz model celebrates production milestone at the McLaren Technology Centre in Woking.
Woking/UK
The 1,000th Mercedes-Benz SLR McLaren has rolled off the production line at the McLaren Technology Centre in Woking, England. The vehicle, which is painted black and equipped with its unique trademark carbon bodyshell, is designated for a customer in Japan.
In May 2004, the “Silver Arrow of the 21st century” went into production in Woking, which is located near London. Since then, the Mercedes-Benz SLR McLaren has established itself among sports car enthusiasts around the world as a fascinating synthesis that combines cutting-edge innovation with the mystique of an automotive legend.

The SLR is built exclusively by hand, and the vehicles manufacturing approach combines the advantages of the Mercedes-Benz Production System and McLarens expertise in building superb sports cars. In terms of the vehicle body, the result is a carbon structure that is unique in the world. Specially trained staff perform a series of assembly functions at each workstation in a concept that is applied during the vehicle painting process as well. The specialists who build the vehicle thus identify very closely with the vehicle they build.

The SLR embodies both the tradition and the innovative capability of the Mercedes brand. This is reflected by the fact that the SLR’s body, doors and hood are made solely from carbon-fiber composites, marking the first time that high-tech materials from the aviation sector and the Formula 1 racing series are being used in production vehicles.

The exclusive environment of the McLaren Technology Centre not only offers optimal conditions for manufacturing the super sports car; it also corresponds to the expectations of the SLRs exclusive clientele. At the heart of the sales concept for the vehicle is the SLR Experience Centre in Woking, which is designed to meet the specific needs of SLR customers.

The McLaren Technology Centre, which was designed by world-famous architect Lord Norman Foster, is also the site where the Team McLaren Mercedes Formula 1 racing cars are developed and built.

World premiere for a host of new products