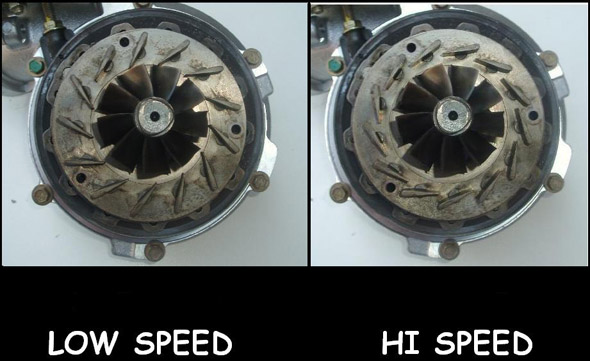 VNT Turbocharger
The turbocharger e.g. in the C 220 CDI (W202, W203) can electrically adjust the angle of its guide vanes to match the current engine load in order to use the maximum possible amount of exhaust energy for compressing the intake air and for building up the boost pressure.

This is made possible thanks to a variable nozzle turbine, known as VNT for short. This allows the system to set the optimal boost pressure for all driving situations; at low engine speeds, the guide vanes reduce the cross-sectional area of the air flow to optimize the in-flow at the turbine which in turn increases boost pressure.

At higher engine speeds on the other hand, the cross-section is increased and the turbocharger operates at a lower speed. In this respect, the VNT turbocharger is superior to conventional turbocharger systems for diesel engines because the entire exhaust energy can be used for generating boost pressure at all times. Further benefits of the variable turbo-charger control include improved cylinder charging and therefore higher torque.

VTG
Variable Turbocharger Geometry. The turbine shovels of the turbocharger are electrically adjustable. Electric adjusting allow a rapid adjusting speed leading to a better air supply than with other shovel adjust techniques.

Air Control System
A microprocessor closes the lower air intake depending on the driving situation, improving the Cd value.