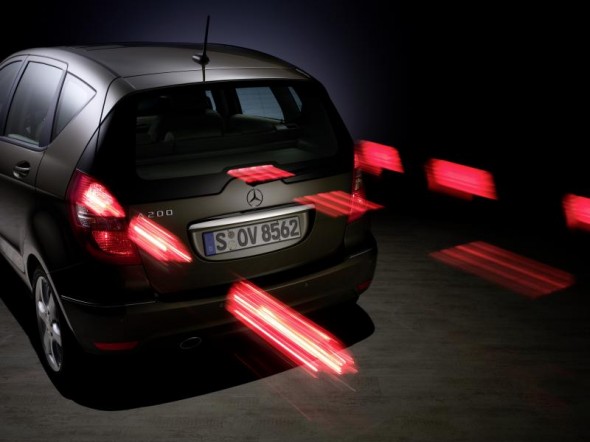 During heavy braking from a vehicle speed greater than 50km/h, the Electronic Stability Program ESP® activates the new “Adaptive Brake Light” safety function, which makes the brake lights flash instead of just lighting up continuously.
Once the danger has passed and the brake pedal is only held or slightly released by the driver, ESP® deactivates the “Adaptive Brake Light” and the brake lights light up continuously as usual.
These flashing brake lights ensure a higher level of attention on the part of following traffic.
Automatic activation of the hazard warning system
If the “Adaptive Brake Light” function is activated at a speed exceeding 70km/h, and remains active until the vehicle comes to a halt, the hazard warning system is automatically switched on when the vehicle stops.
It can be manually switched off again at any time. Once the vehicle begins to move at a speed over 10 km/h again, as often happens in dense moving traffic, the system switches the hazard warning lights off.

Along with Brake Assist PLUS, Mercedes engineers have developed another system to help reduce the high number of dangerous rear-end collisions that occur on the road.

This new technology more effectively warns drivers travelling behind of the danger of a rear-end collision by causing the front vehicle’s brake lights to blink in critical situations. 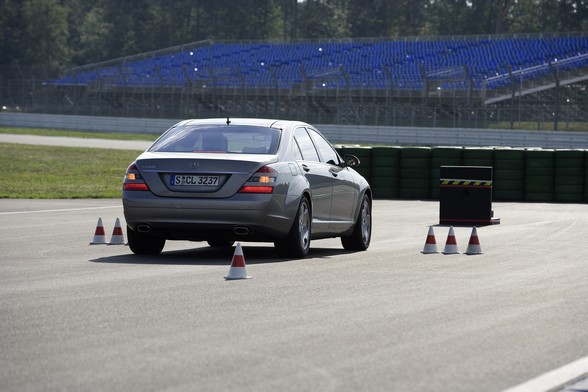 Studies conducted by experts in Sindelfingen, Germany show that drivers’ braking reaction time can be shortened by up to 0.2 seconds on average if a blinking red warning light is substituted for a conventional brake light in emergency braking situations.
As a result, the braking distance can be reduced by approximately 4.4 metres at a speed of 80 km/h, and by as much as around 5.5 metres at 100 km/h.
As such, blinking brake lights are an effective and easily implemented measure for helping to prevent rear-end collisions.
A key positive aspect of the new system is that it makes driving safer even for those motorists who do not own a Mercedes-Benz.
EU authorities approved the technology in February 2005; the current Mercedes-Benz S-Class model is the first vehicle to be equipped with the new adaptive brake light. Mercedes-Benz will also begin fitting CL-Class coupes with the system in just a few weeks.
The Mercedes experts tested various types of hazard lights for their study. Brake lights that blink four times as rapidly as yellow hazard lights proved to be particularly effective in warning drivers of a possible rear-end collision.
The Mercedes study also revealed that activating the hazard lights in dangerous situations had only a minor effect on drivers’ reaction times. 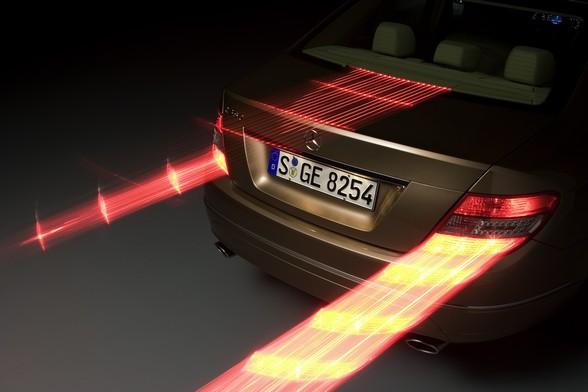 In their efforts to reduce the large number of dangerous rear-end collisions, Mercedes engineers have supplemented Brake Assist PLUS with a new development which warns drivers of this risk more effectively than before: flashing brake lights.
Research by Mercedes engineers has shown that driver reaction times are shortened by up to 0.2 seconds if a flashing red warning signal is given instead of the conventional brake light during emergency braking.
At a speed of 80 km/h this reduces the stopping distance by about 4.40 metres, and at 100 km/h by no less than 5.50 metres or so.
This means that flashing brake lights are an effective and easily implemented way to reduce rear-end collisions.
It also makes motoring safer for road users who do not drive a Mercedes-Benz. Specialists at Mercedes tested various warning light systems during their study.
Brake lights which flash four times as quickly as the amber hazard warning lights during emergency braking proved particularly effective in alerting following drivers to the danger of a rear-end collision.
The Mercedes study also revealed that switching on the hazard warning system in a dangerous situation has no significant effect on the reaction times of other drivers.
Tags
Adaptive Brake Light

The future of Mercedes models