A wealth of new features for a pleasant atmosphere

During the systematic further development of the entire climate control system, a particular focus was placed on the development goals of performance, air quality, precise regulation, noise level and efficiency.

As a new feature, the AIR-BALANCE package comprises perfume atomisation, ionisation and even more efficient filtration compared with the standard model.

The THERMOTRONIC automatic climate control in the rear has two additional zones to improve thermal comfort. Electric heating of the armrests is a completely new feature. 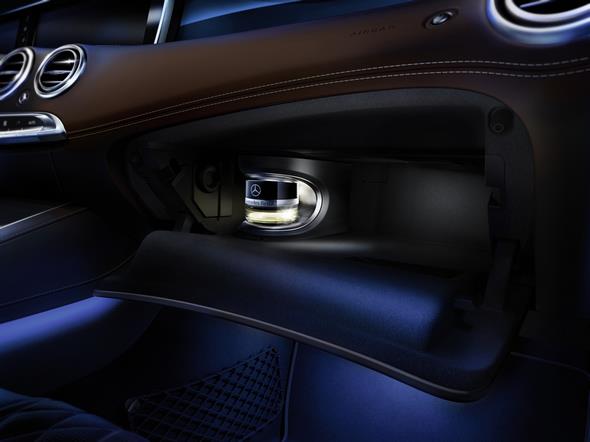 New features include completely autonomous adjustment options for the driver and front passenger sides with respect to temperature level, air distribution and air volume, for the front footwell temperature with a warmer or cooler tendency and also for the individual automatic modes with their climatic settings of “FOCUS”, “MEDIUM” and “DIFFUSE”.

The profiles, which differ in air volume and air distribution, can be conveniently set via the COMAND Online system. 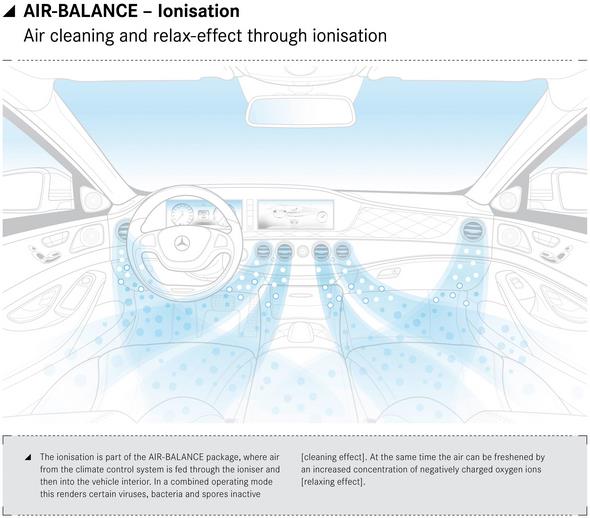 As a world first, the new S-Class Saloon has an “active perfuming system” as part of the AIR-BALANCE package.

A high-quality fragrance introduced into an already luxurious interior like a perfume enhances the sensual impression of the Mercedes-Benz interior by appealing to the sense of smell.

In all advanced cultures, high-quality fragrances are part of the repertoire of sensual pleasure and individuality. Perfuming individualises the smell of the interior.

The interior smell is not changed permanently, nor are the perfume molecules deposited on fabric surfaces or clothing. The fragrance is discreet and mild, and dissipates rapidly.

The fragrances were developed in collaboration with the perfume specialist Marc vom Ende.

The perfuming system consists of two parts: a glass flask with an atomiser head and the fragrance generator in the glove compartment.

The system uses the effect whereby there is a constant exchange of matter on the surface of a solution. In the process, molecules enter the gaseous phase (volatilisation) while other molecules are returned to the liquid.

If a partial airflow is passed over the surface of the liquid, the air can be enriched with the molecules of the chosen fragrance.

The perfumed air is then passed directly into the vehicle interior via a separate aperture. A bypass system allows the flow rate per unit of time to be variably adjusted.

This active perfuming system is a further development of the fragrance ball familiar from the MAYBACH ZEPPELIN. 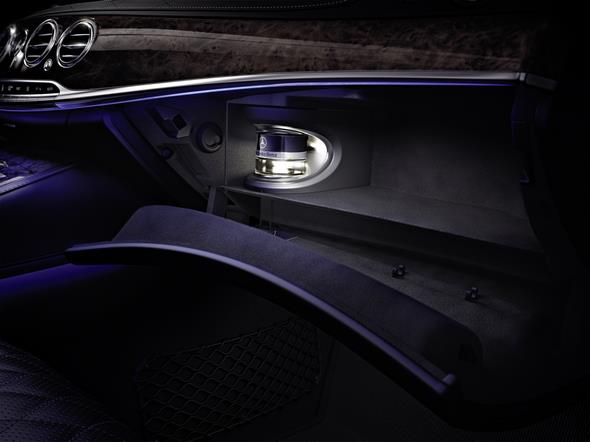 Another component of the AIR-BALANCE package is filtering of the outside air fed into the vehicle interior by the climate control system, and of the air recirculating in the interior in air recirculation mode.

The filter system is now even more efficient, and is able to reduce the peak levels of certain gaseous emissions while lowering their concentration below the perception threshold.

The filter system consists of two combined fine dust/activated charcoal filters between the intake and air distribution system of the air conditioner.

Activated charcoal is used as the filter material for the interior by virtue of its good ability to absorb gaseous pollutants and odours. It is produced from coconut shells.

At Mercedes-Benz these filters are examined for effectiveness in both new and used condition, to ensure that their filtering efficiency is maintained at least until the next vehicle service.

Ionisation is another component of the AIR-BALANCE package, the air from the climate control unit being conducted into the interior via an ioniser.

At the same time the air can be freshened by an increased concentration of negatively charged oxygen ions (relaxing effect).

The new S-Class Saloon is available with the optional Warmth Comfort package for all engine variants. This includes:

The innovation in this package is the armrests, whose surfaces can be heated by heating elements on the same principle as seat heating.

Originally conceived for the energy-efficient heating of electric cars, this panel heating in the S-Class makes for a particularly cosy environment.

The armrest heating is switched on and off using the seat heating switch in the door panel, and can be deactivated via COMAND Online.

The heating output of the seat heating system can reach up to 2000 watts per square metre, and can already be felt in the sensitive lumbar area after ten seconds. 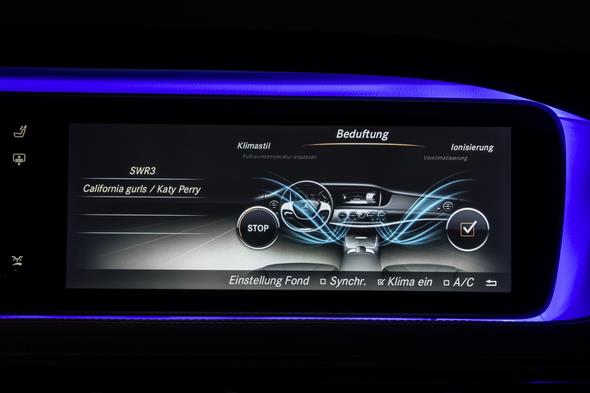 The new climate control system in the new S-Class combines energy efficiency with comfortable temperatures on every seat, and sets new standards in terms of the adaptability of automatic operation to the individual wishes of the occupants.

The new automatic climate control is operated via:

To improve climatic comfort in the rear even further, a newly developed, water-flow controlled two-zone THERMOTRONIC rear automatic climate control system installed in the centre console is available as an optional extra.

The air is taken into the interior of the centre console. The cooled air flows through a water-flow controlled heat exchanger, and is distributed to the separate left/right centre vents, the rear footwells and the vents in the B-pillars.

Air distribution to both sides is automatically controlled by four step motors.

Further climate control functions such as auxiliary heater, perfuming, ionisation and footwell temperature can be accessed via the climate status display in the head unit, where basic functions such as air distribution and ventilation modes are also accessible.

The air volume and distribution control have been developed further and improved in comparison to the climate control system in the preceding series.

The heat exchanger in the heating circuit has an output of 9.7 kW at an air volume of 8 kg/min. Diesel models are equipped with a heat exchanger featuring three integrated PTC heating element rows with a selectable six-stage heating output of 1.5 kW.

An electronically commutated auxiliary water pump allows residual heat operation when the ignition is switched off.

The flat-tube evaporator in the refrigerant circuit has an output of 8.8 kW. In non-hybrid models the refrigerant compressor is variably externally controlled, and incorporated into the belt drive system via a magnetic coupling.

A large number of sensors are used to regulate the automatic climate control, e.g. venting and evaporation sensors, potentiometers in the vent selector wheels, multifunction sensor with moisture measuring cell and a ventilated interior sensor for the interior temperature in the area of the overhead control panel.

Solar radiation is registered with the help of two separate solar sensors on the left/right of the interior, a sensor in the cockpit and a sensor on the parcel shelf.

GPS navigation data are used to determine the direction of the sun and the altitude above sea level (elevation).

In case GPS navigation data are not available, a fallback calculation of the sun’s direction is made on the basis of the vehicle-encoded country of delivery, the time of day and the date.

The air conditioning control system is therefore able to react to the increase in heat caused by direct sunlight even if the solar sensors register no change in the interior, for example if they are fully or partly obscured by the A/B/C-pillars or by the roof.

Various measures have been incorporated to make the climate control system as energy-efficient as possible:

As an optional extra, an auxiliary heater with radio remote control is available as part of the climate control system.

In this way the interior of the parked vehicle can be heated or ventilated with fresh air, with activation as follows: