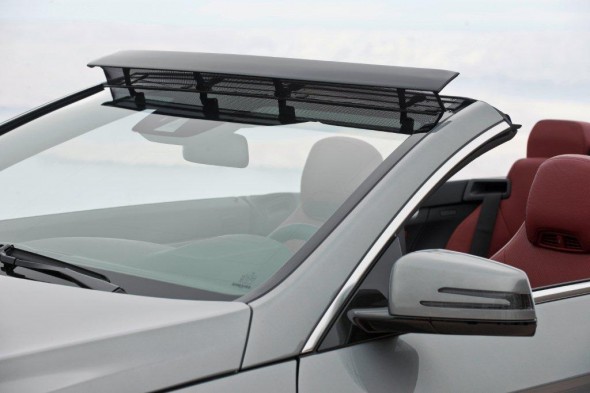 AIRCAP®: this automatic draught-stop can be acti-vated at the push of a button in order to reduce inte-rior turbulence significantly in the new Mercedes-Benz E-Class Cabriolet. AIRCAP® consists of two components: a wind deflector that can be extended by six centimetres with a net in the roof frame and a draught-stop between the rear seats. 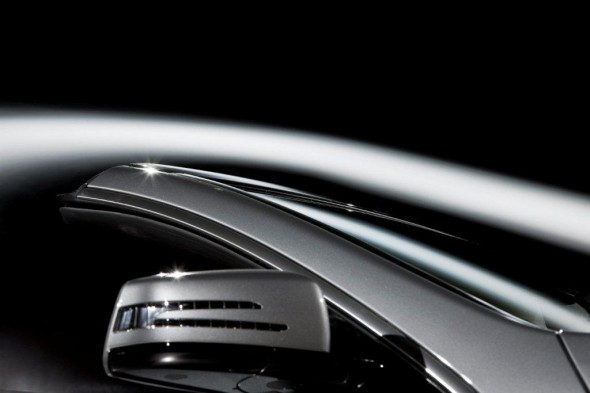 Less draught at the push of a button 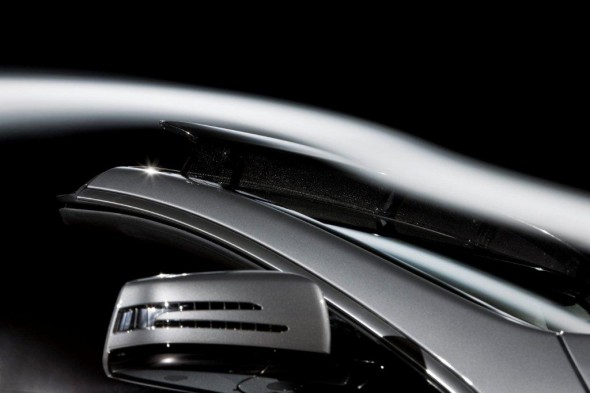 • Practical: AIRCAP® reduces in-car turbulence at the push of a but-ton
• Comfortable: sea of warm air washes around passengers, even at high speed
• Refined: combination of wind deflector and adjustable draught-stop

Whether you want to feel the wind in your hair or not is entirely up to you: the new Mercedes-Benz E-Class Cabriolet is the first car that can fulfil either of these wishes at the push of the button. The innovation behind this is called AIRCAP® – an automatic draught-stop system that reduces interior turbulence at all four seats whilst setting new standards in terms of ease-of-use and acoustic comfort. At the same time, this innovation enables the Mercedes-Benz E-Class Cabriolet to be driven with the top down in all four seasons – even with a full complement of occupants on board. When paired with the further improved Mercedes innovation AIRSCARF®, it makes open-top driving a highly pleasurable fresh-air experience, even when the tem-perature outside plummets. Because a ‘cap and scarf’ arealways on board.

AIRCAP® consists of two components: a wind deflector that can be ex-tended by around six centimetres with a net in the windscreen frame and a draught-stop
between the rear seats. AIRCAP® therefore meets two aerodynamic re-quirements: the wind deflector elevates the airflow, while the net raises the pressure level in the interior in a controlled manner, thus reducing the back-flow, which is curbed and equalised by the draught-stop. Hence the air movements in the interior of the E-Class Cabriolet are reduced substantially, creating a sea of warm air: warm air flowing into the interior from the heat-ing system remains there for much longer when AIRCAP® is activated. Simi-larly, on extremely hot days, the air conditioning and AIRCAP® allow the passengers to enjoy a pleasantly cool interior, even when the roof is open. 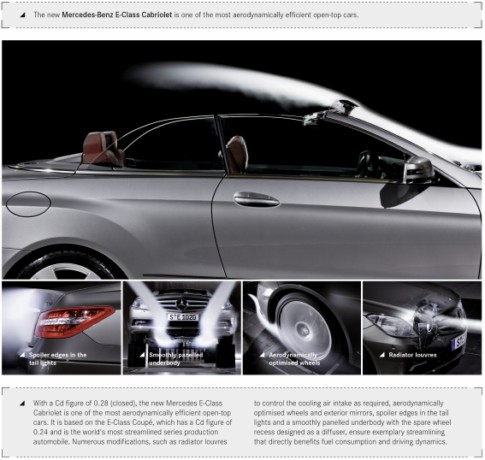 Practical and comfortable: a new dimension of open-top driving

AIRCAP® offers a wealth of benefits over conventional bracketed draught-stops:
• No manual installation or removal required
• Rear seats always remain fully accessible – either for passengers or for luggage items such as sports bags or briefcases
• No need to stow the draught-stop in the boot when it is not in use, which would take up valuable space
• Vastly improved all-round visibility
• Total fresh-air experience available at the push of a button

During a product clinic organised by the Mercedes Market Research de-partment, cabriolet drivers were able to test the new system on prototypes – and they welcomed it enthusiastically. Not least because the central control panel can be used to operate the AIRCAP® functions and, at the push of a button, lower all four side windows simultaneously. Furthermore, the driver can activate the AIRCAP®
system in a matter of seconds at speeds of up to 160 km/h, while the system
can remain in use right up to the car’s top speed. 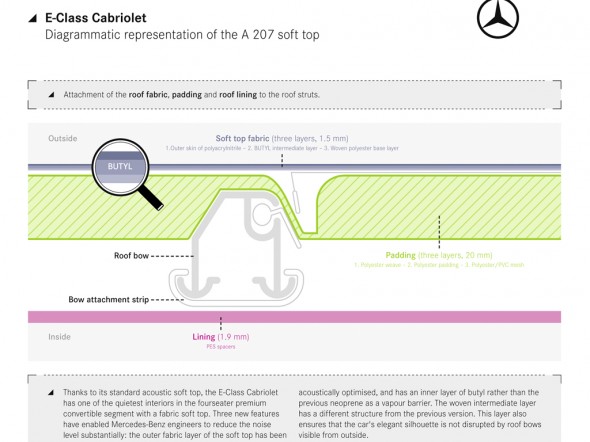 The front element of the AIRCAP® system – the wind deflector with perfused net in the windscreen frame – is switched to either on or off. Meanwhile, the small draught-stop between the rear head restraints, together with which it is moved
up and down electrically, has three positions: retracted, half extended and fully extended. In the lower position, AIRCAP® is deactivated. When the AIRCAP®
button is pressed, the system adopts the middle position, in which case the front occupants enjoy the full benefit of less driving wind, while all-round visibility is not impaired. If one of the rear occupants puts on a seat belt (i.e. if at least one of the rear seats is occupied), the head restraint and draught-stop move to their highest positions, meaning that even the rear passengers enjoy better protection from the wind than passengers in conventional cab-riolets. Finally, the wind deflector module can also be extended when the roof is up, for cleaning purposes, thanks to a special switching system.
When AIRCAP® is activated, not only is there less draught, meaning in-creased comfort, the interior noise level is also reduced substantially – all passengers
therefore find it much easier to communicate with each other. 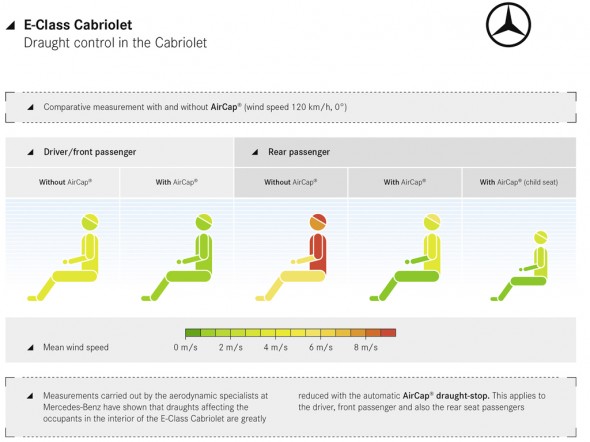 How it works: a triumph of aerodynamics and design

Many years of intensive development work were required before AIRCAP® was ready for series production. When the team of aerodynamics experts headed by Peter Dannhäuser and Dr Alexander Wäschle started developing the automatic draught-stop for the E-Class Cabriolet, they seized an idea that had already been tested for the E-Class Cabriolet (model series 124) at the beginning of the 1990s but could not be implemented (see section entitled “Under the microscope – from KOF4 to AIRCAP®”).

The function of the two components soon became clear:
• Elevation of the free flow above the interior
• Net at the front increases the basic pressure in the interior
• Draught-stop at the rear reduces the backflow
• Faint secondary swirl in the lower area of the passenger compart-ment

However, many simulations (see section entitled “Under the microscope: flow simulation”) and numerous wind tunnel tests were required to optimise the exact dimensions and positions of the two AIRCAP® elements. Selecting suitable nets proved especially time-consuming: over two hundred different combinations were tested until the optimum material mix was found in terms of perfusion, dirt deflection and durability.

Implementing the idea in series production then provided a further major hurdle for the team around Bernd Plocher together with the designers Daniel Seifert and Serkan Fidan. The invention of a new four-link kinematic system allowed them to integrate the extendable wind deflector into the smallest of spaces in the upper windscreen frame without altering the latter’s contours and, therefore, the car’s flowing lines. The intelligent construction and the selection of high-strength lightweight materials enabled them to produce an extremely slender wind deflector. It proved particularly tricky to house the electric drive system in a cavity measuring just three centimetres across – but a specially contracted Swiss supplier eventually came up with a suitable drive motor with a diameter of 1.8 centimetres and a torque of six Newton metres.

The wind deflector also had to be designed to withstand the heavy pounding by the wind and weather without letting moisture or dust reach the car’s inte-rior or the sensitive drive components – all of which was verified in extensive tests (see section entitled “Testing” in this press kit). Finally, the protective effect of the windscreen frame had to remain fully intact in the event of roll-over. This was achieved thanks to the integral design of the front wind deflector module with the kinematic elements.

The wind deflector module is also an integral part of the PRE-SAFE® func-tions for the E-Class Cabriolet. If an imminent accident is detected, AIR-CAP® retracts into the windscreen frame at lightning speed.

The wind deflector module comprises a total of 211 individual components (motor/gear unit counted as one component), while the 32 different materials used are protected against all environmental influences by 14 different coatings and surfaces. One further number clearly underlines the lengths to which the developers went to enhance comfort for cabriolet drivers: the de-velopment is protected by almost 20 patents.

AIRCAP® is a world-first which sees Mercedes-Benz continuing its tradition of
using innovations to make open-top driving exceptionally comfortable and safe. It was in 1989 that the brand introduced the first draught-stop as a world premiere in the SL model series – a feature that has now long been standard in roadsters and cabriolets made by many other brands. 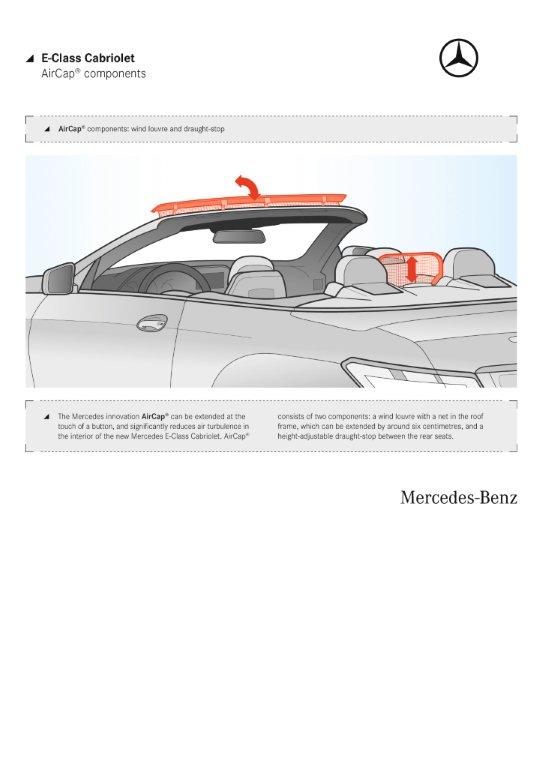 Another spyimage on the S-Class coupe (C216 facelift)