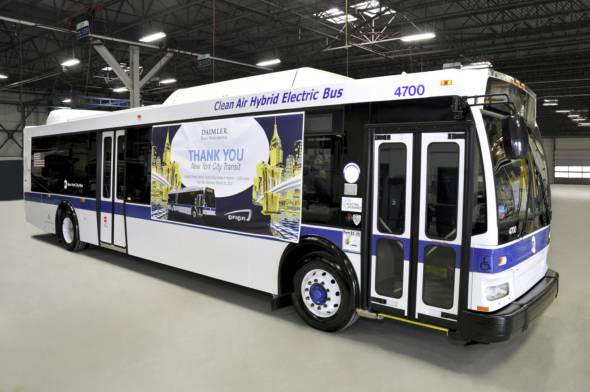 The company currently operates a fleet of 1,679 hybrid buses, of which 1,675 are Orion VII diesel-electric hybrids from DBNA. This gives NYCT the world’s largest fleet of hybrid vehicles for local public transportation.

Orion began developing and producing hybrid buses in the mid-1990s and formed a partnership with NYCT to help test the buses during their development phase. DBNA then delivered its first Orion diesel-electric hybrid bus to New York City in 1998. Although the Orion hybrid bus is used all across North America, New York City has the most units in operation.

Daimler Buses is the world’s largest manufacturer of diesel-electric hybrid buses, with over 3,000 units either in service or on order. In addition to New York, Orion hybrid buses have proven themselves in cities such as San Francisco, Houston, Toronto, and Ottawa.

“These buses have together logged nearly 100 million miles of passenger service while transporting half a billion passengers,” says Ferguson. “Their operation has reduced fuel consumption by 5 million gallons and CO2 emissions by about 50,000 tons.”

DBNA began series production of the Orion VII hybrid bus in early 2000, and Daimler Buses has since grown to become the global market leader for hybrid buses. Orion’s history of innovation continued with the introduction of lithium-ion energy storage technology for series-production buses in 2008. The new development reduced the weight of the brand’s buses, thereby further improving fuel economy. DBNA is currently further enhancing the Orion hybrid bus, and refinements are to be introduced this year.

At the heart of Orion’s diesel-electric hybrid buses is the brand’s HybriDrive system, which is manufactured by BAE Systems of Johnson City, NY. The system powers the bus with a 6.7-liter diesel engine, a generator, an electric motor, and a lithium-ion energy storage unit. The components are arranged in series and were configured especially for the Orion VII hybrid bus. The diesel engine is optimized to run at relatively constant speeds. Acceleration and deceleration are accomplished by varying the speed of the electric motor rather than the diesel engine. This results in maximum efficiency, fuel savings, and clean operation.