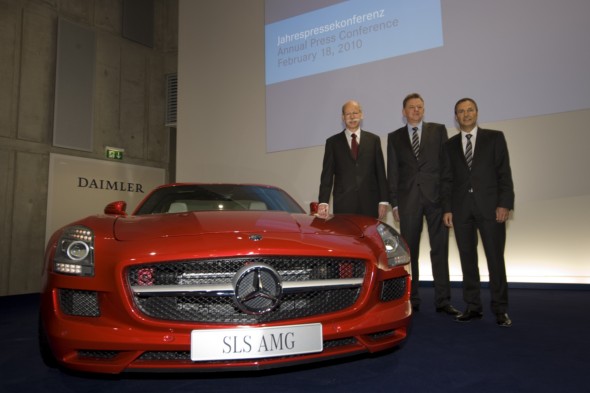 Stuttgart – Daimler AG (stock exchange symbol DAI) today presented the preliminary and unaudited results of the Group and its divisions for the year 2009.

After a difficult first half of the year, Daimler succeeded in continuously improving its EBIT in the third and fourth quarters. EBIT from ongoing business increased again to plus €0.6 billion in the fourth quarter of 2009, resulting in full-year EBIT of minus €1,513 million (2008: plus €2,730 million).

Due to the net loss, the Board of Management recommends to the Supervisory Board that no dividend should be distributed for the year 2009. This decision is solely a reflection of the course of business in 2009 and is not related to the Group’s expected business development this year.

“Last year brought many great challenges also for Daimler,” stated
Dr. Dieter Zetsche, Chairman of the Board of Management of Daimler AG and Head of Mercedes-Benz Cars, at the annual press conference. “But as the year progressed, we made the Group significantly more efficient and laid the foundations not only to overcome the upheaval affecting our industry, but to lead from a strong position. We are emerging from the crisis with plenty of torque.” 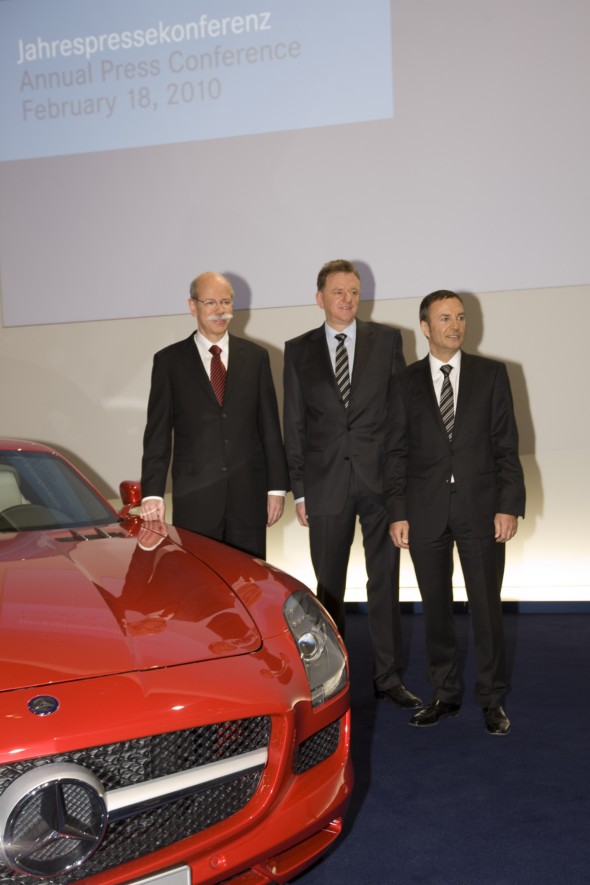 The world economy is still in a period of transition at the beginning of 2010. On the one hand, the worst of the most severe economic crisis of the post-war period has now been passed; on the other hand, there is very little hard evidence that a self-sustaining, lasting upswing has actually started. Although there are some signs of global economic recovery, there is no reason to assume that the crisis is over. However, the ongoing solid growth of emerging markets such as China and India is exerting a positive influence.

According to current estimates, worldwide demand for automobiles will grow this year in a bandwidth of between 3% and 4% compared with crisis year 2009. Growth in the upper premium automobile segments is likely to be stronger than in the market as a whole because these segments hardly profited from governments’ incentive programs last year, so no significant related effects are to be expected in 2010.

Worldwide demand for commercial vehicles should also grow again moderately after the severe crisis of last year. In the NAFTA region, a market recovery of 10% to 15% is anticipated for medium and heavy-duty trucks after three consecutive years of significant decline. In Europe, the development of demand for light-duty trucks could be slightly better than in 2009, but demand for commercial vehicles above 6 tons will probably remain similar to the prior-year level.

On the basis of its attractive and competitive range of automobiles, Mercedes-Benz Cars assumes it will be able to defend its market position even with the continuation of difficult economic conditions. We therefore aim to continue the positive development of the second half of 2009 and to increase unit sales in 2010.

On the basis of assumptions concerning the development of automotive markets and the divisions’ planning, the Daimler Group therefore expects to increase its total unit sales in 2010.

Following a significant decrease in 2009, the Daimler Group assumes that its revenue will rise again this year, but will still be significantly lower than in 2008. The growth will probably be driven by all the automotive divisions.

In a very challenging economic environment in 2010, Daimler expects to post Group EBIT of more than €2.3 billion from its ongoing business. This will be the result of the market success of new products, a moderate upward development of the most important markets, and intensified efforts to increase efficiency.

The divisions’ EBIT expectations for 2010: 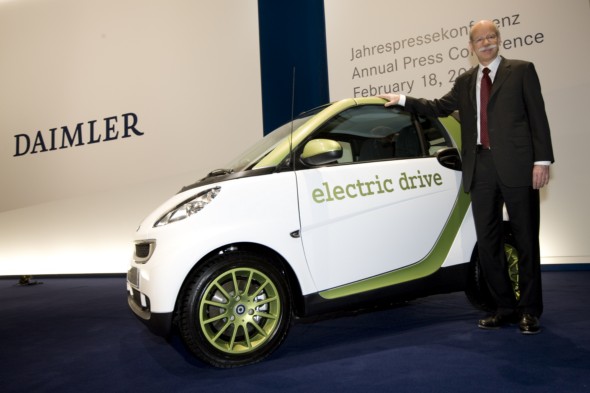 The main reason for the Group’s unsatisfactory profitability in 2009 is that vehicle unit sales fell in all segments due to the global economic crisis. However, the decline in earnings was significantly alleviated by measures taken by the Group at an early stage to adjust costs in an amount of €5.3 billion, as well as by further efficiency enhancements in the context of the optimization programs already running.

EBIT in the reporting period was additionally reduced by charges related to optimizing and repositioning the business operations of the subsidiaries Mitsubishi Fuso Truck and Bus Corporation (€245 million) and Daimler Trucks North America (€95 million). The decline in earnings at Daimler Financial Services was primarily due to the increased cost of risk. An additional charge of €100 million was incurred at Daimler Financial Services on the disposal and valuation of available-for-sale non-automotive assets. Furthermore, lower interest rates for the discounting of non-current provisions and the significantly increased annual contribution to the German Pension Security Association led to expenses of €388 million and €164 million.

Chrysler had a negative impact on Group EBIT of €294 million in 2009, mainly resulting from the agreement concluded in the second quarter, in the context of which Daimler also disposed of its remaining 19.9% of Chrysler shares.

Special items affecting earnings in the past two years are detailed in the table on pages 12 and 13.

Group revenue decreased by 20% to €78.9 billion; adjusted for exchange-rate effects, there was a decrease of 21%.

The free cash flow of the industrial business was significantly positive at plus €2.7 billion despite the difficult economic situation (2008: minus €3.9 billion). The main reason for the increase in the free cash flow was the development of inventories and trade receivables as well as investments in property, plant and equipment, which offset the negative effects from the divisions’ earnings. The free cash flow was reduced, however, by contributions to pension plans and a reduction in trade payables.

The net liquidity of the industrial business increased by €4.2 billion to €7.3 billion.

In recognition of the committed efforts of the workforce in a difficult environment, the Board of Management has decided to make a special payment in 2010 of €500 to the employees of Daimler AG who are paid according to salary and wage-tariff agreements.

Despite the difficult environment, the Daimler Group invested
€6.6 billion in research and development and property, plant
and equipment in 2009 (2008: €8.0 billion).

Daimler intends to play an active part in shaping the technological transformation facing the automotive industry with pioneering innovations also in the future. The Group therefore maintained a high level of research and development expenditure of €4.2 billion last year (2008: €4.4 billion). The main areas of work were new, extremely fuel-efficient and environmentally friendly drive technologies, in line with the “Road to Emission-free Mobility” initiative. The Group is working on optimizing conventional drive technologies and enhancing their efficiency through hybridization, as well as on electric vehicles with fuel-cell drive and battery power. Another focus is on new safety technologies.

In the years 2010 and 2011, Daimler plans to spend a total of
€9.7 billion on its research and development activities. €6.1 billion
of that total will be spent at the Mercedes-Benz Cars division.

The divisions in detail

After a difficult first half of the year, the division’s performance improved continuously as the year progressed. EBIT of plus €608 million was achieved in the fourth quarter, resulting in full-year EBIT of minus €500 million, compared to plus €2,117 million in 2008. The sharp fall in earnings was primarily due to the significant weakening of demand for cars and the resulting drop in unit sales. This development was only partially offset by the successful launch of the new E-Class, which in many markets only became fully available in the second half of the year. Charges on earnings also resulted from continued intense competition and pressure on prices in automobile markets, from a less favorable model mix and from expenditure for research and development.

At Daimler Trucks, unit sales fell to 259,300 vehicles due to the global financial and economic crisis and the biggest worldwide decline in demand for transport services of the last 50 years (2008: 472,100). The sales decline affected all the division’s core markets (Europe, the United States, Latin America and Japan). Revenue decreased by 36% to €18.4 billion. Markets have stabilized at a low level in the second half of the year.

Daimler Trucks’ EBIT of minus €1,001 million was significantly lower than the very strong result of the prior year (2008: plus €1,607 million). Lower unit sales of commercial vehicles had a substantial impact on the development of earnings in 2009. The comprehensive repositioning of the business operations of Mitsubishi Fuso Truck and Bus Corporation and of Daimler Trucks North America resulted in charges of €340 million. The division’s operating result excluding special reporting items amounted to minus €179 million in the fourth quarter.

Mercedes-Benz Vans was also unable to avoid the general market development and sold 165,600 units last year. Sales of Sprinter, Vario, Viano, and Vito models were thus significantly lower than the very high figure of 287,200 units sold in 2008. Revenue decreased by 34% to €6.2 billion.

Despite the drastic fall in unit sales, the division continuously improved its performance as the year progressed. EBIT of plus
€126 million was achieved in the fourth quarter, resulting in full-year EBIT of plus €26 million (2008: €818 million).

With sales of 32,500 complete buses and bus chassis (2008: 40,600) and revenue of €4.2 billion (2008: €4.8 billion), Daimler Buses remained by far the leading manufacturer of buses over eight tons gross vehicle weight in 2009. The decline in unit sales was largely a result of significantly weaker demand in Mexico and Latin American markets.

The division achieved EBIT of €183 million (2008: €406 million). The reduction in earnings was primarily due to the worldwide slump in demand.

Daimler Financial Services’ business development in the year 2009 was also affected by the global financial and economic crisis. Due to lower vehicle unit sales, new business fell by 15% to €25.1 billion. The weaker new business and the sale of parts of the non-automotive portfolio in North America led to an 8% decrease in worldwide contract volume to €58.3 billion.

The division achieved EBIT of just better than breakeven in 2009 at
€9 million (2008: €677 million). This earnings trend was primarily caused by increased expenses related to higher credit risk. There was also a charge of €100 million on the disposal and valuation of non-automotive assets.

The “reconciliation” item primarily reflects Chrysler-related items and Daimler’s proportionate share in the results of its equity-method investment in EADS.

As a result of the agreement entered into in the second quarter of 2009 between Daimler, Chrysler, Cerberus and the Pension Benefit Guaranty Corporation, in the context of which the Group disposed of its remaining 19.9% interest in Chrysler, total expenses of €378 million were incurred. The legal transfer of Chrysler’s international sales activities to Chrysler LLC and the valuation of Chrysler-related assets resulted in gains totaling €84 million.

Daimler’s share in the profit of EADS amounted to €88 million
(2008: €177 million). Possible charges have not yet been taken into consideration arising from the negotiations running between EADS and the ordering countries concerning the financing of the A400M military aircraft.

The Annual Report and other information connected with the Group’s financial statements for the year 2009 are expected to be published on the Internet on March 2. The Annual Report will be available in printed form as of the middle of March.

Special items affecting earnings in the past two years are shown in the following table:

The figures in this document are preliminary and have not yet been approved by the Supervisory Board nor audited by the external auditors.

AMG-designed engine: 6.3 One of the most powerful V8s on the planet