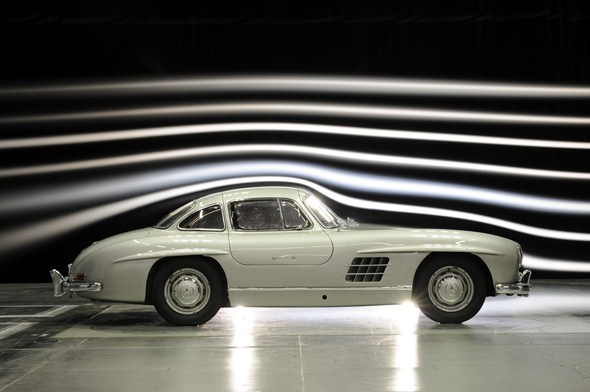 Stuttgart – New cars are constant objects of study in the wind tunnel. They are subjected to tests in order to optimise them in different ways – for example, to reduce fuel consumption, but also to improve wind noise or splash water flow.

Historical vehicles, on the other hand, are seldom indeed guests in the wind tunnel, for their development has long since been finished. However, the values measured in the wind tunnel are not always available for them, or sometimes there are indeed measured values, but these cannot be compared with the figures obtained in today’s tests.

In order to have a contemporary comparison vehicle, a 1951 Mercedes-Benz 300 S (W 188 series), a luxurious, sporty touring car, was also examined. This vehicle had lent some of its technology to the first post-war Mercedes-Benz sports car.

This result underscores the efforts of the engineers and designers back then to attain a low drag coefficient as an important prerequisite for the SL’s racing success – which the car then went on to achieve in the course of the 1952 racing season at different international motorsport events, for example at Le Mans or in the Carrera Panamericana in Mexico. The 300 SL (W 198 I) series-production sports car returned a drag coefficient value of cD = 0.389. 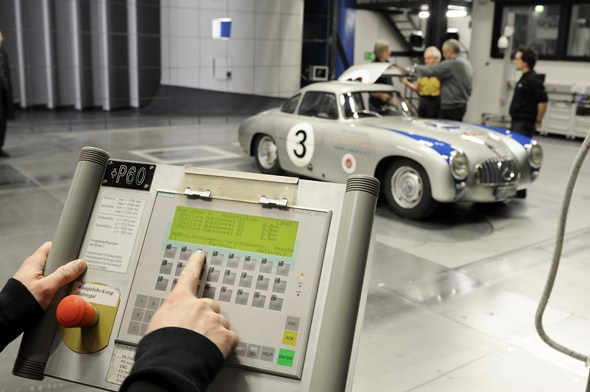 The wind tunnel in Stuttgart-Untertürkheim itself is historical: it hearkens back to the 1930s and the legendary FKFS-Institut (Forschungsinstitut für Kraftfahrwesen und Fahrzeugmotoren Stuttgart) or Stuttgart Research Institute for Automotive Engineering of Stuttgart Professor Wunibald Kamm, who enjoyed similar fame for his importance in the field of aerodynamics.

The tunnel is based on the so-called Göttinger design principle with a three-quarter open test section. In the mid-70s the then Daimler-Benz AG took over the wind tunnel. Today it is one of several test installations of its kind in the Group.

Morning of the 23rd of January 2012: the three cars are standing at the ready. Little do the workers and employees at the Mercedes-Benz Untertürkheim plant suspect of the bustle of activity going on behind the walls of the wind tunnel facilities. For eight hours the 5-Megawatt electric motor will set the fan blades in motion to drive the vast volume of 9000 cubic metres of air.

The object is to determine the relationship among the three study objects in terms of their surface and air resistance values – the three cars are closely related technically: the drive system of the W 194 is based in part on that of the W 188, while the W 198 is based on the W 194.

The following programme is scheduled: 10 point measurements of the cD values with wind velocities of 130 km/h and 200 km/h. In addition, the vehicle frontal area (A) as well as the coefficients of lift at the front axle (cAF) and at the rear axle (cAR) were determined.

The day promises to be exciting. With the first measurement, that of the 300 S, the most diverse figures, guesses and estimates buzz around the hall – all of the estimates high because of the vehicle design, which presents a relatively large surface to the wind. The frontal area of the 300 S with exterior mirror, 2.28 square metres, is thus no surprise.

No-one yet suspects that no guess or estimate will hit the mark. At the wind tunnel control station tense concentration dominates the scene.

However, both these values lie in the realm of purely theoretical knowledge since the 300 S has a top speed of 175 km/h.

No less was the tension before the start of the test series with the second vehicle, the 300 SL (W 194 series). This is the original 1952 racing season car.

At the same time the results of the measurements showed how far from reality was the drag coefficient cD = 0.25 value determined in the 1950s with a 1-in-5 clay scale model of the W 194 – and how great an influence, for example, the air flow through the engine compartment (which of course the clay model did not have) has on the overall air resistance of the car. 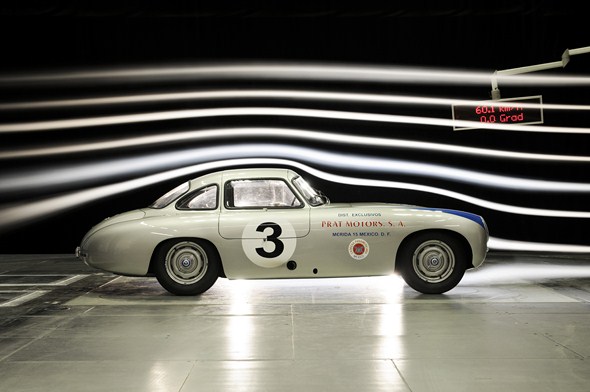 Apart from the bare measured values the tests revealed that specifically the two SL models generate a particularly strong lift at the front axle that increases at higher speeds, which in turn makes the cars susceptible to side winds. This is confirmed by the high yaw moment under a diagonal incident wind flow direction of 20 degrees.

For the 300 S model (W 198 series) the investigation showed a strong flow break at the top edge of the radiator grille, a separation which remains perceptible as far back as the windscreen. By contrast, the transition from the windscreen to the roof turned out to be better than expected. However, the airflow breaks away again some 30 to 50 millimetres above the rear window and meets the vehicle body again on the boot lid.

Both SL models show good airflow over the front area. However, the lower edges of the vehicle body are too high, in particular in the case of the W 194, leaving the vehicle underbody unprotected, which results in the high lift forces at the front axle. Airflow around the windscreen, the A-pillars and the roof is good, but in the W 194 the airflow breaks off at the rear window rubber surround, to later hug the car again at the boot lid.

Mercedes-Benz SL: sportiness in its genes

45 years of AMG: anniversary marks the start of a new era