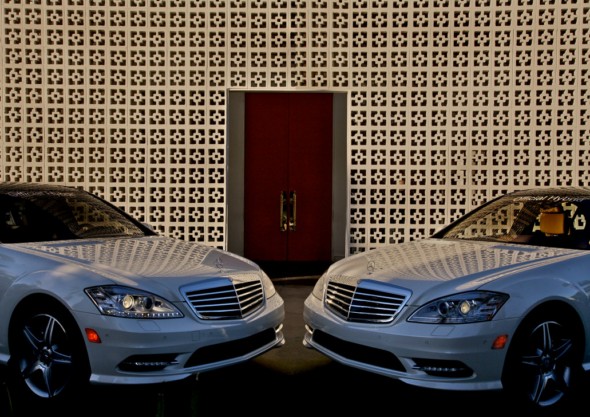 As the official vehicle of the 21st Annual Palm Springs International Film Festival, Mercedes-Benz rolled-out its environmentally friendly hybrid luxury vehicles for Hollywood’s elite. The Festival, which runs from January 5-18, 2010, starts the winter awards season with a spectacular program of films and a must-attend gala.

“Mercedes-Benz is proud to support the festival and the Palm Springs International Film Society as a sponsor and official vehicle for the seventh consecutive year,” says Jill Martinette, Mercedes-Benz Regional Marketing Manager. “The festival’s red carpet arrivals and A-list honorees are a perfect opportunity to show that being eco-friendly is possible without sacrificing luxury.”

The S400 HYBRID features the world’s first lithium-ion battery in a production vehicle. The 275-hp V6 gasoline engine provides impressive fuel economy with an estimated 30 miles per gallon on the highway.

Throughout the two week festival, Mercedes-Benz is displaying several additional eco-friendly vehicles including the C300 Sedan, GLK350 SUV and the 2010 E350 Sedan and Coupe. Built with 85 percent recyclable materials, all four are powered by highly efficient V6 engines that achieve the California Air Resources Board’s most stringent exhaust rating as a Partial Zero Emissions Vehicle (PZEV).

About the Palm Springs International Film Festival
The Festival runs January 5-18, 2010. PSIFF was founded in 1990 by then-Mayor Sonny Bono. This year’s Festival will include over 400 screenings of more than 200 films from approximately 60 countries. The Festival presents a majority of the films submitted for consideration in the Best Foreign Language category for the Academy Awards, as well as a large number of American independent and international features and documentaries marking their world, North American or U.S. debuts. Screenings are held on 15 screens throughout Palm Springs. Screening information can be found at http://www.psfilmfest.org.

About Mercedes-Benz USA
Mercedes-Benz USA, headquartered in Montvale, New Jersey, is responsible for the sales, marketing and customer service for all Mercedes-Benz and Maybach products in the United States. MBUSA offers drivers the most diverse line-up in the luxury segment with 12 model lines ranging from the sporty C-Class to the flagship S-Class sedans and CL coupes. More information on MBUSA and its products can be found at www.mbusa.com and www.maybachusa.com.