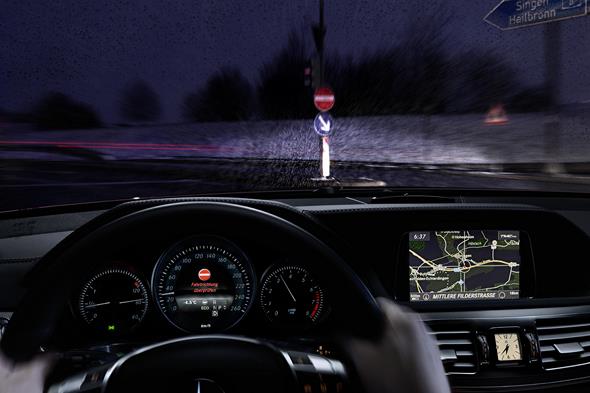 Stuttgart – In recent months there have been a shocking number of fatal accidents caused by so-called wrong-way drivers. Mercedes‑Benz has now developed an assistance system which aims to eliminate this threat and can even prevent drivers from driving unintentionally in the opposite direction to the flow of traffic.

The new traffic sign assistance system designed by the Stuttgart-based premium manufacturer is able to recognise no-entry signs and issues an acoustic and visual warning to the driver if he or she should stray on to the incorrect carriageway and become a dangerous wrong-way driver.

The new system will be available for the new Mercedes‑Benz S‑Class, due to be launched this year and the facelifted E‑Class.

“There’s a vehicle driving the wrong way on the A1, the A2, the A5, the A46…” – over the last three months, this type of report has been worrying Germany almost weekly. During this short period, more than 25 people died through no fault of their own because they collided with a vehicle travelling the wrong way on motorways or dual carriageways.

However the reality is still more shocking. As a rule wrong-way drivers are only mentioned by the media when their actions end with victims who are either badly or fatally injured. The number of wrong-way drivers, known in German as “phantom drivers” (Geisterfahrer), is actually much higher.

The German Federal Department of Transport estimates that about 1700 radio warnings about phantom vehicles on German roads are issued annually. The ADAC speaks of
up to 2800 wrong-way drivers annually – that is more than seven a day. In most cases wrong-way driving ends without tragedy, but the threat of wrong-way drivers still accompanies drivers every day.

In order to prevent anyone becoming a wrong-way driver – whether by mistake, due to inattentiveness, stress resulting from heavy traffic or complicated road designs – Mercedes‑Benz has developed a new traffic sign assistance system which, amongst other things, can warn drivers should they violate traffic regulations and ignore no-entry signs.

This makes the system a useful instrument which, above all, can prevent drivers from entering the motorway via the wrong slip road.

Professor Thomas Weber, Member of the Board of Management of Daimler AG, responsible for Group Research and Mercedes-Benz Cars Development:
“On our journey towards the vision of accident-free driving, Mercedes-Benz orientates itself on real-life accident situations in order to provide the best possible protection to all road users.

The very idea that we will be using the Mercedes‑Benz Intelligent Drive system to reduce the risk of vehicles unintentionally travelling against the flow of traffic once again brings us one big step closer to this goal.”

The technical core of the system is a camera on the inside of the windscreen. It can visually identify no-entry signs and send the information obtained to the computer in the on-board electronics.

If it detects that the vehicle is about to pass the relevant prohibitory signs and is entering a motorway slip road, the system warns the driver. Three loud beeps are issued and a red no-entry symbol lights up in the display in order to make the driver aware of the danger.

In order to further improve the reliability of the system, the electronics compare the data from the camera with data from the navigation system. The other functions of the new Mercedes-Benz traffic sign assistance system also profit from this feature, which also includes the detection and display of speed limits and no-overtaking signs as well as the signs indicating the end of these particular restrictions.

If poor visibility limits the system’s optics too much – during heavy snow flurries, for example – the system reports to the driver that it is “temporarily unavailable”.

The new traffic sign assistance system which can prevent drivers from unintentionally driving on the wrong carriageway will initially be available in the new Mercedes‑Benz S‑Class and the facelifted E-Class.

It will then be gradually introduced into other models. Initially the system will be designed primarily for use in Germany. Mercedes‑Benz is however working intensively
on adapting the system for use in other countries.

The Mercedes-Benz A 45 AMG