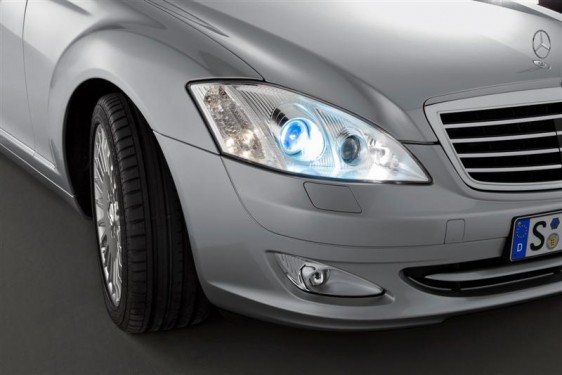 Pedestrian protection: Not just a question of compliance with crash-test regulations for Mercedes-Benz
The new S-Class marks a new high point in Mercedes’ long-standing commitment to pedestrian protection. The engineers in Sindelfingen have developed a whole raft of safety features for the luxury saloon which reduce the risk of injury to pedestrians, cyclists and motorcyclists in the event of a collision.
“For Mercedes-Benz, pedestrian protection means much more than just complying with the current crash-test regulations. Our primary goal is to avoid accidents in the first place. That is the best, most effective form of pedestrian protection”, says Ulrich Mellinghoff, Head of Safety, NVH and Testing at the Mercedes-Benz Technology Centre. Indeed, test results show that Brake Assist, which was developed by Mercedes-Benz, makes a significant contribution to preventing accidents involving pedestrians. The Active Light System, cornering light function and the new night view assist system (the latter making its world debut in the S-Class) also offer considerable scope for enhancing safety. Ulrich Mellinghoff looks forward to the wider adoption of safety features of this kind: “We welcome the fact that systems like these and the issue of accident avoidance which is associated with them are to be included in the future EU directive on pedestrian protection.”

Mercedes-Benz has long been committed to protecting pedestrians and cyclists/ motorcyclists. Many of the actions and safety measures taken over the past decades have their origins in Mercedes-Benz initiatives. Smooth body surfaces, energy-absorbing bumpers, laminated windscreens, folding exterior mirrors, rounded door handles and recessed windscreen wipers are just a few of the char-acteristics of Mercedes-Benz passenger cars which help protect pedestrians.
The new S-Class builds on this already high standard of safety with additional protective measures. The underside of the bonnet has been designed for programmed deformation and impact-energy absorption in the event of an accident with a pedestrian. A newly developed “yielding” hinge supports the deformation of the bonnet and also helps to reduce injuries to pedestrians and cyclists/ motorcyclists. The front wings of the new Mercedes saloon are attached to the upper longitudinal members by means of a special fixing element. This has precisely calculated rigidity characteristics and is programmed to give way in the event of an impact.
The deformation space between the bonnet and the engine components beneath it an important factor in accidents where there is contact between the pedestrian’s head and the bonnet has been increased in two ways: firstly, through the new outer contour of the saloon, the front section of which is some 22 millimetres higher than the predecessor model. Secondly, the engine, shock-absorber towers, reservoirs and control gear have been fitted up to 13 millimetres lower. The Mercedes engineers have also reduced the overall height of the windscreen-wiper system, thereby increasing the deformation space. Another pedestrian-oriented safety feature is to be found in the front bumper of the new S-Class which features a flush, foam-filled spoiler edge which ensures early and even support in a collision.
Pedestrian protection thanks to Brake Assist

In the sphere of active safety, too, the new S-Class is equipped with highly effective systems which can help to avoid accidents with pedestrians. One such system is the standard-fit Brake Assist, which interprets a given speed of brake-pedal actuation as indicative of an emergency situation and builds up the maximum braking assistance within fractions of a second. This can significantly shorten the vehicle’s stopping distance – by up to 45 per cent, for example, when the vehicle is travelling on a dry road at a speed of 100 km/h.
Brake Assist not only helps prevent rear-end collisions but also makes an effective contribution to protecting pedestrians. This was demonstrated by a study conducted by Mercedes-Benz with a driving simulator, in which 55 car drivers took a simulated drive through a town at a speed of 50 km/h, during which a child suddenly ran into the street. The only way to avoid hitting the child was to initiate an emergency braking manoeuvre. The test showed that drivers supported by Brake Assist had far fewer accidents than those drivers who did not have the system; the overall accident rate was reduced by 26 percentage points through the use of Brake Assist.
The launch of the new S-Class also marks the world premiere of an enhanced version of Brake Assist: Brake Assist PLUS. This functions as an anticipatory system which provides drivers with even more effective support in critical situations. Based on radar technology, the system scans the area ahead of the vehicle and calculates the necessary brake force assistance if there is a risk of a collision. If the driver operates the brake pedal, the new Brake Assist PLUS system instantly builds up the braking pressure required to manage the situation. While the conventional Brake Assist system requires a reflex activation of the brake pedal, the new system recognises the drivers intention to brake when he or she puts clear pressure on the pedal, after which it automatically optimises the braking pressure. One of the key preconditions for preventing collisions is thus fulfilled: the best possible deceleration for the situation in hand. 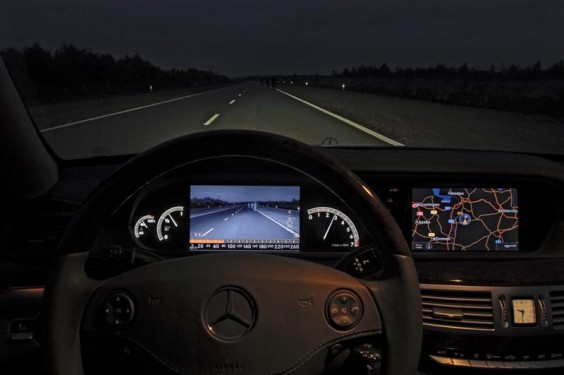 Night view assist for greater safety in the dark

According to German accident statistics, more than 55 percent of accidents resulting in pedestrian fatalities occur at night or in semi-darkness at dawn or dusk. This is why Mercedes-Benz is committed to helping drivers see better in the dark. The new S-Class is equipped with powerful projection-beam headlamps with optional bi-xenon technology which play an important role in this respect. The Stuttgart-based car manufacturer offers bi-xenon technology in combination with the Active Light System and the cornering light function which illuminate areas around the vehicle which are left in darkness by normal headlamps. These features make an effective contribution to the prevention of pedestrian accidents at intersections and junctions.
Night view assist, a world first for Mercedes-Benz is being premiered in the S-Class. Based on infrared light technology, the system is available in combination with bi-xenon headlamps and the Active Light System. This unique package of the best and most effective lighting technology currently available is one of the defining features of the new Mercedes flagship model. In the dark, the newly developed night view assist system provides the driver with a much greater range of vision than conventional low-beam headlamps, enabling the course of the road, pedestrians, cyclists and obstacles to be seen much sooner.
Mercedes engineers examined the capabilities of this technology in a series of trials. During comparative test drives with low-beam bi-xenon headlamps and the new night view assist system, the test drivers recognised obstacles in the road much sooner when assisted by the infrared light system. During tests, drivers were already able to discern roadside test dummies dressed in light-coloured clothing at a range of around 210 metres, which is about 41 metres sooner than with low-beam bi-xenon headlamps. The system proves even more effective in the case of pedestrians in dark clothing. In these situations the night view assist system already enabled the drivers to identify the test dummies at a range of around 164 metres, but only at about 72 metres when driving with low-beam bi-xenon headlamps alone. This represents a safety improvement of no less than 125 percent.
Even when the headlamps of oncoming vehicles dazzle the driver and severely obscure the view, visibility is much better with this assistance system: a test dummy in light-coloured clothing standing at the road edge 50 metres behind an oncoming vehicle was detected from an average distance of 140 metres with the help of night view assist around 53 metres sooner than with low-beam bi-xenon headlamps.

A Piece of S-Class on Your Wrist

Unveiling of the W221