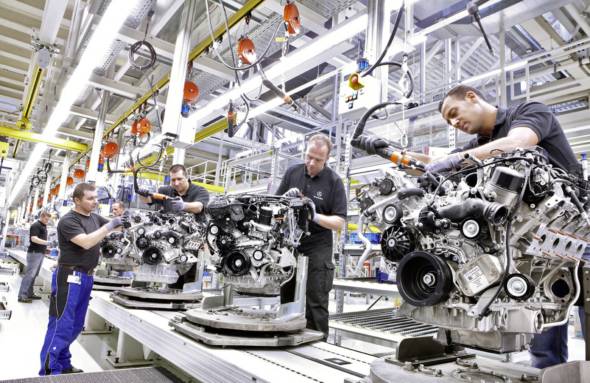 Stuttgart – The Mercedes-Benz Bad Cannstatt plant produces strong personalities: 125 years ago, just a stone’s throw from the plant, in the famous greenhouse, Gottlieb Daimler and Wilhelm Maybach built their “grandfather clock” – the first single-cylinder engine. Today, the Bad Cannstatt plant is home to all Mercedes-Benz V6 and V8 petrol engines. With a workforce of around 900 employees, today the specialist V-engine production facility is a key part of the Mercedes-Benz Cars powertrain production network. In addition to traditional engine assembly, Bad Cannstatt is also responsible for the mechanical processing of key components such as crankcases and cylinder heads.

Volker Stauch, Head of Powertrain Production and plant manager of the tradition-rich Untertürkheim location: “This is where the roots of engine design and the Mercedes-Benz brand lie. We have been building high-tech components for our Mercedes-Benz passenger cars passionately at this location from the very start. This tradition compels us to keep on delivering top quality from Untertürkheim in future.”

The engine plant in Bad Cannstatt was officially opened in April 1997. At the time, this “factory of the future” had a production area of around 66,300 square metres. Numerous expansions and high levels of investment in recent years illustrate the success story of Bad Cannstatt and the deep-seated links with the location and the region: in 2004, the production area was expanded by just under 18,000 square meters to 84,200 square metres. The two millionth engine was built at Bad Cannstatt in 2003, followed by the three millionth engine in 2006. Since its official opening, over four million examples of the V-engine duo have come off the assembly lines at the Bad Cannstatt plant.

One billion euros for a new series

This success story is set to continue with the new generation of engines. The all-new V6 and V8 engines score top marks for efficiency in the premium segment. The new V8 engine delivers 320 kW (435 hp), around 12% more than its predecessor, whilst fuel consumption is down by up to 22%. The new V6 engine delivers 225 kW (306 hp) and uses just 7.6 litres per 100 km, making it 24% more economical than its predecessor. 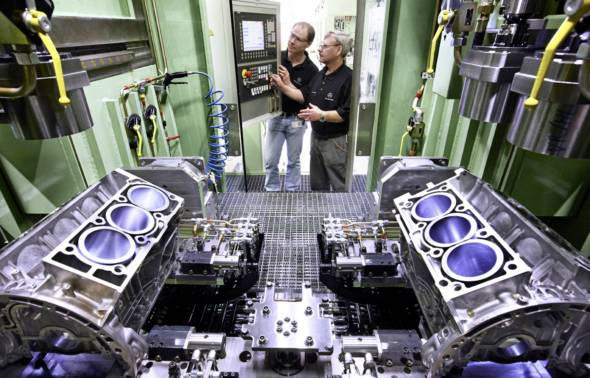 One new feature in production is the assembly line: despite different angles (60 and 90 degrees, and therefore an optimum design for performance), both V-engines can be produced on one line. The result is more efficient and more flexible production using as many common components as possible for the variants of the new engine series. With a high output of unit numbers, this means reduced costs, which ultimately benefits the customer. The components undergo rigorous technological enhancement in terms of weight optimisation. A good example of this is the revamped camshaft adjuster, which is now much lighter and more compact than its predecessors. The crankcases, pistons and cylinder heads are made of weight-optimised diecast aluminium. The crankshaft, connecting rod and valves are made of special forged steel and are lighter.

Production of the series is carried out in the proven powertrain production network, consisting of the Untertürkheim, Hamburg and Berlin plants. The camshafts, camshaft adjusters, water pumps, oil pumps and fuel components originate from Berlin. The exhaust manifolds, air manifolds and clean air lines are produced in Hamburg. The camshaft and connecting rod stem from Untertürkheim, whilst the foundry in Esslingen-Mettingen produces the cylinder head, oil pan, valve housing, crankcase and starter ring gear.

At the time of its official opening, the Bad Cannstatt plant was already viewed as proof that efficient production, ecological common sense and attractive jobs were not necessarily mutually exclusive. Here, minimum energy requirements go hand in hand with the optimum use of all resources. This involves, for example, minimising waste materials and recycling process fluids and chips from mechanical processing. With its closed-loop process recycling systems, Bad Cannstatt is almost completely free of wastewater and waste materials, and the plant falls well within legal limits for clean gas values.

The Bad Cannstatt plant has set new standards with systems that combine the utilisation of waste heat and heat recovery with an advanced photovoltaic system. The solar panelling – which covers an area of 5,000 square metres and at the time was one of the largest systems found anywhere in the world – generates an annual energy output of 350,000 kWh. This is sufficient to meet the electricity needs of more than 120 homes. The electricity generated is fed directly into the plant grid. 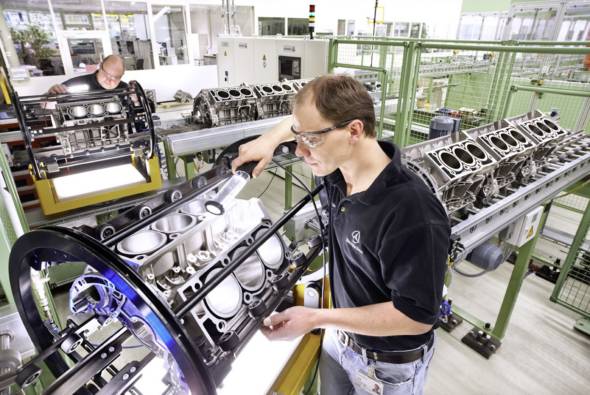 For production of the new engine series, the plant adopted the award-winning principle of minimum-quantity lubrication. Previously, large amounts of cooling lubricants were used in “chip removal”, e.g. in drilling, milling and grinding, in computer-controlled CNC systems. These lubricants lubricate and cool tools and workpieces, thus reducing wear and helping to remove the chips. By converting conventional wet processing to minimum-quantity lubrication, the lubricants can in future be metered precisely where the heat is actually generated during processing. This process uses a fraction of the volume of cooling lubricant previously used. Since these substances are manufactured from petroleum and demand both energy- and cost-intensive preparation, the innovation of minimum-quantity lubrication represents an enormous cost advantage and a significant contribution to environmental protection.

In addition, a true eco-paradise has been created on the outskirts of the plant. The “Neckar gravel bed” concept was developed in collaboration with environmental and nature conservation associations. After replicating a Neckar meadow over an area of 4,000 square metres – complete with its own characteristic heat islands and warm microclimate – it has been shown that 40 species of wild bee have now found a new habitat.

The Bad Cannstatt plant in focus: