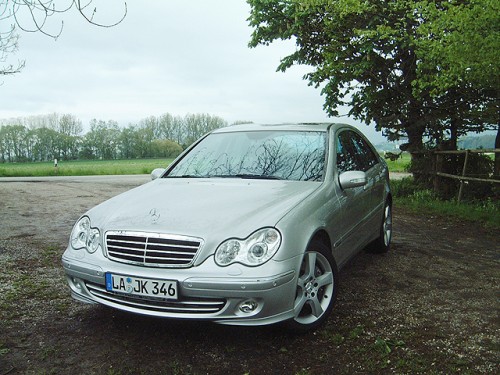 Holy sh*t… *takes a deep breath*…holy sh*t…*let’s that sink in thoughtfully*… let me begin by saying that this car is absolutely insane! I was expecting something powerful but this car completely exceeded all my expectations and completely blew me away. Wow! For a diesel, this thing was brutal: even more so than the already fast E320 CDI!
Here’s my Imagestation album for more pictures I took of the drive. What a car…

Ok, so I go up to the local MB dealership this morning to testdrive this baby. Mr Schultz was already up there and I’ll be driving a base A-Class A150 and an SL350 (3.7-l 245-hp V6) this week sometime. I’ll be driving the B-Class soon too! I can’t wait.

This is the all new 3.0 V6 C320 CDI with 224-hp and 510 Nm of torque: that’s 376 lb/ft which is available at really low RPM’s. This C320 CDI was a Brilliantsilver Avantgarde (sports package in the US) model with low profile and wider tires. At the rear, they measured 245/40 and were fitted unto sporty 17″ rims which looked really hot on the C-Class. This was a facelifted model so it received a nicer more upscale looking body kit. Overall exterior wise, really hot and sporty looking. The low profile tires and their width gave the C320 CDI a slight “muscular” stance IMO. Never really been a fan of the C-Class until now with the facelift. And this model made it even better!

On the inside, it was the usual facelifted C-Class affair. The interior materials were strongly upgraded and provide an overall luxurious atmosphere. The interior isn’t class leading IMO, but much better than before and appropriate for this class of car. Also, once seated inside the car, the door slams with a solid “thud” that reminds of older Benzes. Aside from that, the little C-Class felt solid at last. I had the same feeling with the new A-Class: and you couldn’t say the same about the last A-Class and the pre-facelift C-Class! Notice the brushed aluminum trim on the center console. I am more a fan of wood but little was I to know that this suited the cars sporty personality.

At this point, I am eager to test this car. I preheat the engine for about 2 seconds and then switch it on. It “rumbles” to life with a low but audible diesel clatter. It was much quieter than the C200 CDI and C220 CDI and E320 CDI, which still used the “old” inline-6 turbodiesel engine, which I have driven. Vibrations? Can’t feel any! The engine was cold so I had to drive it around for awhile until it warmed up. While it was cold, you couldn’t really tell the performance potential this thing had. The engine was a little “slow” to respond and loud when you needed some acceleration. That all CHANGED as soon as she was warm. Incidentally, I later walked around the car with the engine running and hmmm….where is that diesel smell? The C320 CDI comes standard with a particulate filter and fullfils the latest Euro emission laws.

Now that she was properly warmed up, I was eager to abuse this thing. First, let me say that the handling qualities of newer Mercedes have been vastly improved. The steering on this thing was quick and precise with a slight touch of traditional MB vagueness to it, just a slight touch so that on the Autobahn high speed handling is more comfortable. The suspension was a little nervous and loud sometimes: but it made up for that in driving very sporty and having excellent handling capabilities. I don’t know if it had the sports suspension because I couldn’t find it in the included options list which stated what this car had and didn’t. Most of the time however, the suspension was ok and did a decent job of absorbing road roughness. So what we have here is a good steering system and a sporty setup suspension that inspired confidence. Time for the engine evaluation. 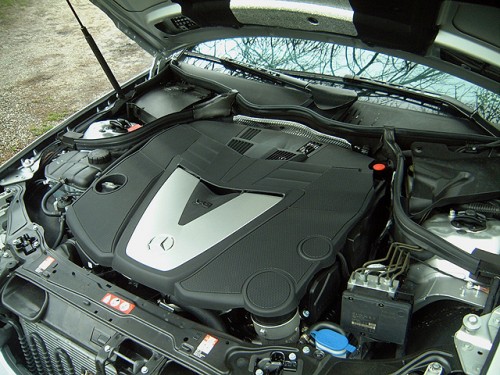 The new 3.0 V6 CDI diesel was a marvel of engineering. Now that she was properly warmed up, she displayed incredible talents. At speed, the motor was quiet: quieter than our very own E320! At stoplights and city driving, a very slight diesel clatter was audible but nothing to get excited over. The real surprise was the POWER. This car had effortless acceleration and midrange acceleration. First time I floored it, the rear wheels (it’s RWD) were having a minor “burnout” and the ESP warning lamp on my dash lit up! As soon as this was corrected, the C320 CDI took off with voracious speed! The speedometer flew to 100 km/h (62 mph) in what seemed like no time at all and I managed to reach 160 km/h (100 mph) before I had to back down due to road conditions and of course not wanting to loose my license. MB claims a 6.9 seconds 0-100 km/h time for the 7Gtronic model, it felt a little quicker to be honest and it probably was seeing that MB always understates these things. Midrange power was no question, this thing had gobs of torque in reserve and really “hauled ass” when pushed at midrange speed. The incredible torque reserves pushed you back quite brutally deep into the seat and the engine emitted a “V8-like” roar: didn’t sound like a diesel at all. I noticed that the engine still had grunt left well into the 3,000 RPM range and a little after that. Approaching 4,000 RPM, that’s when the power and torque surge began to fade: until the 7Gtronic shifted into another gear to repeat the whole thing all over.

On the subject of the 7Gtronic, what a sweet transmission. Seriously, this baby was so effective in managing the shifts, I couldn’t have asked for more. The A/T couldn’t be felt and was very responsive to driver input. I did play around with the manual shift option but like I found out in the CLS350 and ‘500, leave it to the efficient 7Gtronic to handle these things. The 7 gears also helped manage those enormous 510 Nm of torque the engine spit out and probably accounted for that quick acceleration. BTW, the seats of the C320 CDI weren’t bad for this type of driving. They provided pretty good side support despite their bias towards luxury. I never once was thrown around even though I really did have some fun with the car.

I really enjoyed this car. Power and fuel economy and great handling in one package. IMO, the new C-Class is a superior car now and more competitive than ever with the facelift: something the pre-facelift version never was. Sadly, you had to pay €53,493 for this pleasure if you wanted to buy this specific C320 CDI according to the spec sheet inside the car. I picked up my dad at home after I was done with the car so he could try it. The C-Class is a little small once it starts filling up with people but the two of us, 6’2″ (dad) and 6’4″ (me) still had enough leg, head and upper body space inside the car. Well, we had some fun, then drove back home, dropped him off and proceeded to drive back to MB.

Great car really. I wasn’t really expecting something like this to be honest. Impressive handling, solidity and not to mention power to spare. This is probably the most sportiest MB sedan I have driven after the E55 AMG: and this thing was a diesel. I came away with newfound respect for the C-Class and that new diesel engine. You have to drive this thing to experience the power and driving capabilities of this car. What fun I had drifting through curves, stomping the accelerator to have the car respond instantly with such ferocious power…unbelieveable. This thing makes our E320 look “slow” and my dad’s 500SL seem like a “wimp”. After the testdrive, I drove the E320 back home…it felt slow and torqueless in comparison to the C320 CDI…just like it had felt after I drove the E320 CDI.

Screw the C350, this is what I am talking about.