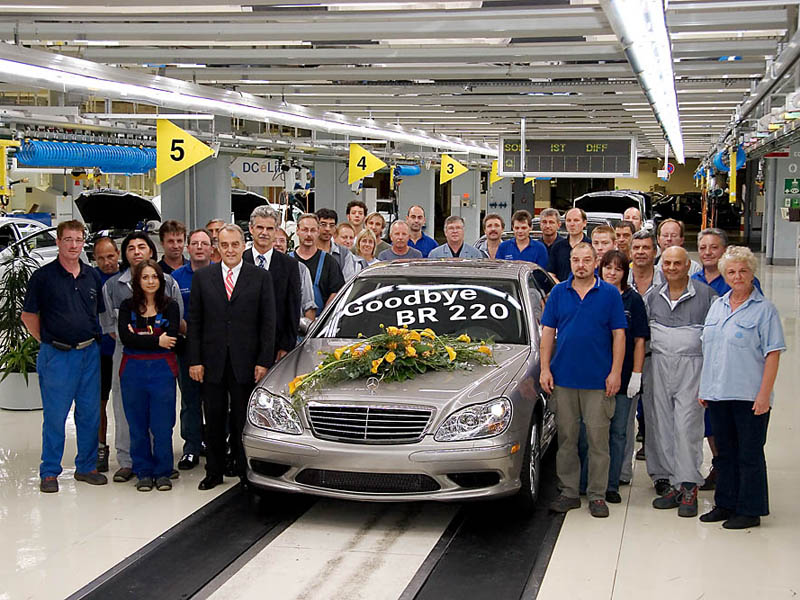 Stuttgart/Sindelfingen
With only a few weeks left to go until the world premiere of the new Mercedes-Benz S-Class, the last 220 Series sedan is rolling off the assembly line today at the Sindelfingen plant.

The milestone vehicle is a cubanite silver S 430 4MATIC and is destined for a customer in the U.S. The production of the last car of the series provided Plant Director Prof. Eberhard Haller with an opportunity to comment on the vehicles success: Since the series was launched in 1998, the employees at the Sindelfingen plant have produced about 500,000 units of the sedan for customers around the world, he said.

Every single vehicle is an expression of their expertise and their attention to detail. I would like to thank all of the employees for making the S-Class what it is today: the worlds most successful luxury sedan.

The S-Class was established as a separate production series in 1965. It has dominated the world market for the past forty years, during which time more than 2.7 million units of the luxury sedan have been sold.

This dominant position was also held by the 220 Series, which continuously led the luxury segment since its introduction in 1998. With a market share of about 30 percent, Mercedes-Benz flagship model is still the worlds Number One luxury vehicle today, shortly before the world premiere of the new S-Class.

The 220 Series has all the hallmarks of a real classic, Haller said. The car’s more than 30 innovations clearly demonstrate its trendsetting function for the entire automotive industry. I am convinced that this timelessly elegant vehicle will remain a common sight on our roads for many years to come.With respect to safety, design and comfort, the new S-Class will point the direction in which the automotive industry will be headed in the future.

The car will be celebrating its world debut at the International Motor Show in Frankfurt on September 12 and will hit showrooms this fall. Like its predecessors, the new S Class will feature technical innovations as standard equipment, making this Mercedes flagship model the benchmark for passenger car development in general.