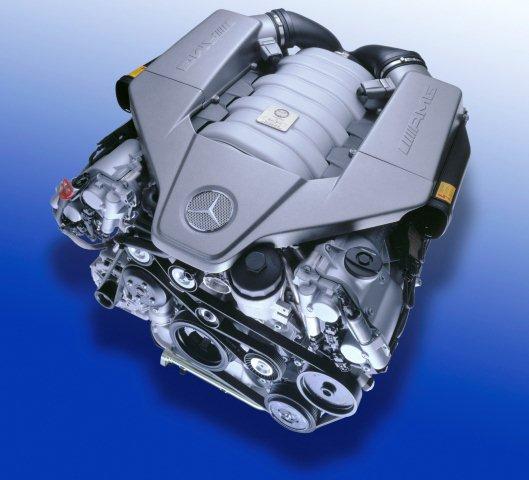 Mercedes-AMG has taken a completely new departure: the new AMG 6.3-litre V8 engine is the first in the world to combine the high-revving concept with a large displacement. Developed entirely by AMG, this high-performance engine has a displacement of 6.3 litres and generates an output of 375 kW/510 hp at 6800 rpm, plus a maximum torque of 630 Newton metres, which makes the new power pack by AMG the world´s most powerful naturally aspirated eight-cylinder production engine. Thanks to its large displacement, the V8 by AMG develops around 20 percent more torque than comparable naturally aspirated engines in this performance class.
Made completely from high-strength aluminium, this naturally aspirated V8 engine has a wealth of exciting features derived from motorsport, and impressively documents the successful motor racing history of AMG. Together with a variable intake manifold featuring two integral throttle flaps, the vertical arrangement of the intake and exhaust ducts ensures perfect cylinder charging. 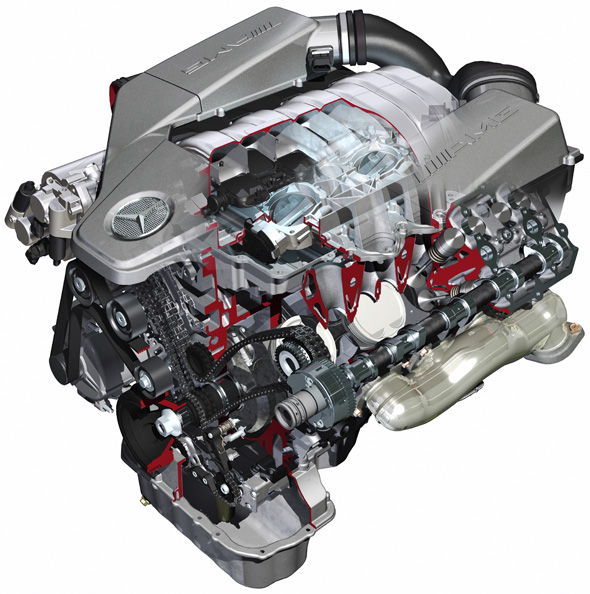 This eight-cylinder unit was developed to series production maturity entirely by the efforts of the engineers and technicians in Affalterbach. The new AMG 6.3-litre V8 engine will shortly be presented in a new high-performance AMG car, and is destined to provide both emotional and physical driving pleasure in other AMG cars in the future. 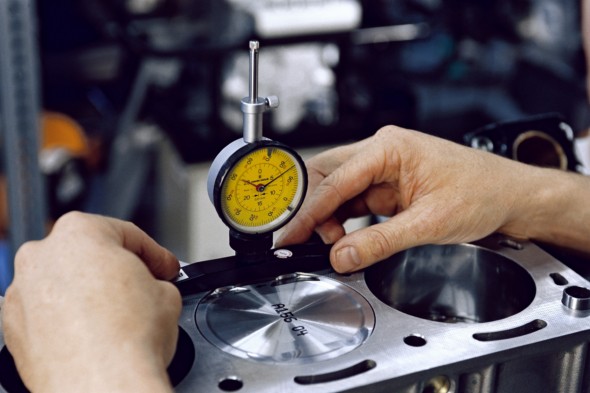 The high expectations of AMG customers and the impressive history of AMG eight-cylinder engines were both an incentive and an obligation for the engineers and product planners at Mercedes-AMG GmbH to come up with a superlative new V8 power unit. A mere glance at the key technical data shows that this has been achieved: from a displacement of 6208 cubic centimetres, the AMG V8 aluminium engine develops a peak output 375 kW/510 hp at 6800 rpm and a maximum torque of 630 Newton metres which is available from 5200 rpm. The maximum engine speed is 7200 rpm.

Keys figures at a glance:

This unique combination of a fast-running concept and a large displacement achieves the best of both worlds: exhilarating flexibility accompanied by high torque at low engine speeds. The driver experiences the decidedly sporty character of the engine in the form of great agility and dynamic responsiveness in all engine speed ranges. 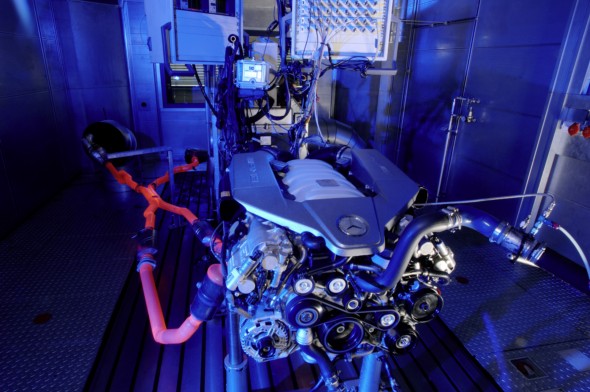 The new AMG V8 already delivers 500 Newton metres to the crankshaft at 2000 rpm, while the maximum of 630 Newton metres is on tap at 5200 rpm  more than any other naturally aspirated engine in this output and displacement class. In short, the new AMG eight-cylinder guarantees dynamic acceleration, rapid intermediate sprints and sheer driving pleasure at the highest level. 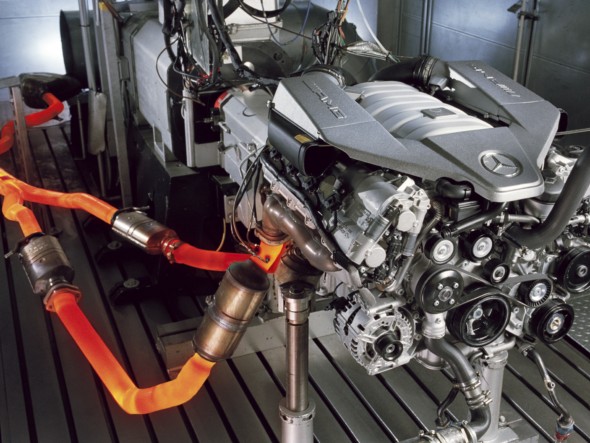 With its new, sporty AMG exhaust note which was designed during an extensive series of tests, the eight-cylinder unit from Affalterbach offers the excitement of a naturally-aspirated, fast-running V8 engine in unmistakable audible and palpable form at low, medium and high engine speeds. 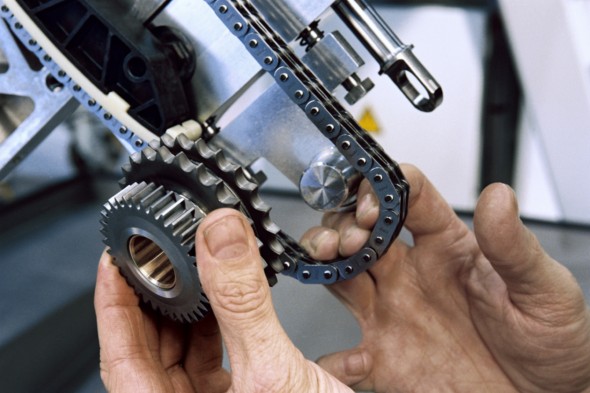 Apart from the large overall displacement, the extremely high output and torque is above all due to the sophisticated intake system  a completely new departure for AMG. Its major characteristics are large cross-sections, the streamlined design of the entire intake and exhaust manifolds, and the vertical arrangement of all ducts in line with motor-racing practice. The newly developed and patented variable intake manifold, which is made of magnesium and has two parallel-action internal throttle flaps, is a world first. The combined action of these components, which are highly unusual in regular engine production, ensures perfect cylinder charging. 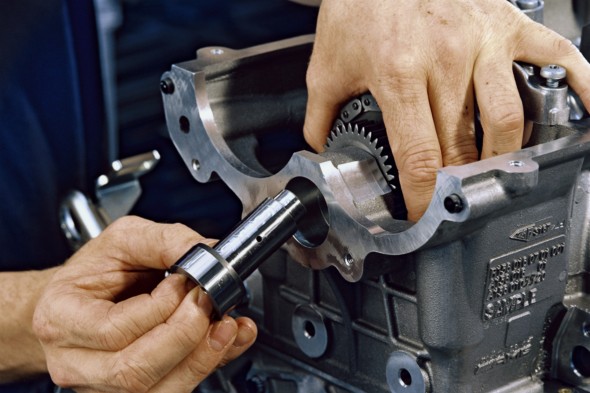 The 32 valves in the cylinder heads are operated by bucket tappets for a rigid valve train and high engine speeds  a technology which has proved its worth in motor racing. Continuous adjustment of the camshafts on the intake and exhaust sides is another special feature of this up-to-date AMG V8 engine. The interior of this powerful new development conceals yet another genuine world first, too: as the worlds first regular production engine, the AMG 6.3-litre V8 engine features a special twin-wire-arc-sprayed (TWAS) coating on the cylinder walls, a new process which produces outstandingly low friction. 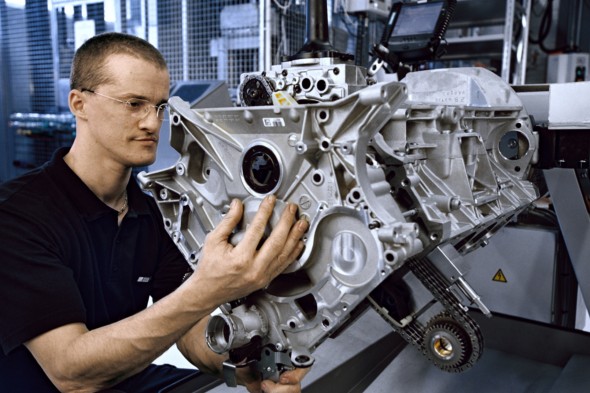 Motor racing genes are once again obvious in the crankcase: as in the supercharged AMG V8 engine for the Mercedes-Benz SLR McLaren, the engineers and technicians opted for a particularly rigid bedplate design with closed-deck technology. Special, cast-in steel components ensure even more rigidity, a reliable oil supply in all everyday operating situations and optimal long-term durability. 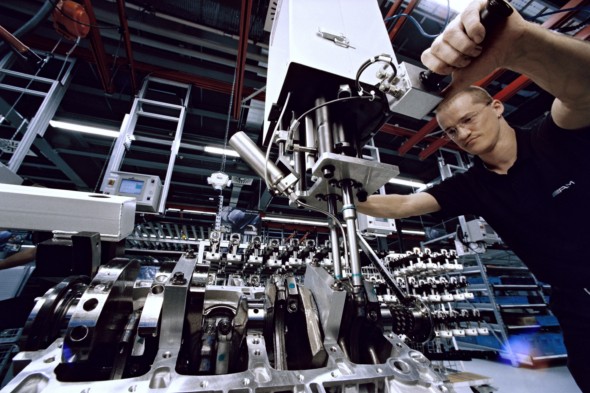 In design terms the new eight-cylinder engine by Mercedes-AMG is the first completely autonomous development to have no features or shared parts whatsoever in common with other eight-cylinder units by Mercedes-Benz. The new 6.3-litre unit differs from the other AMG V8 engines based on Mercedes designs in the distance between cylinders, the crankcase concept, the sophisticated intake and exhaust manifolds and the valve train; the bore/ stroke ratio is also a completely new departure for Mercedes-AMG. 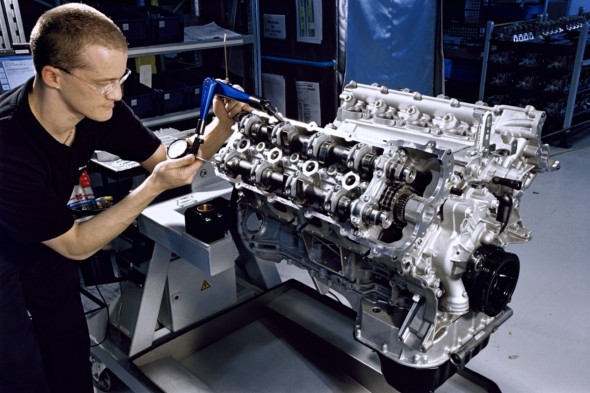 The new powerpack is produced at the ultra-modern AMG engine workshops, according to the “one man, one engine” philosophy. This means that a single technician assembles the complete engine by hand  as witness his signature on the engines AMG badge. 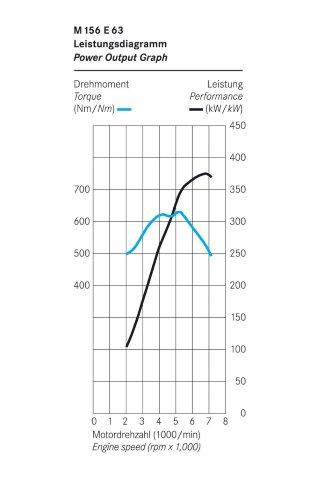 AMG engines have always been in a class of their own. The first highlight was the 6.8-litre, 309-kW/420-hp V8 racing engine in the legendary 300 SEL 6.8 AMG of 1971. At the 24-hour race in Spa-Francorchamps this fast Mercedes saloon immediately secured a highly acclaimed class victory and second place overall. 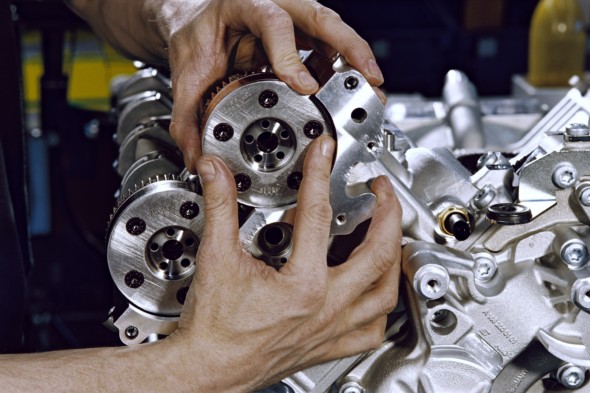 Other milestones in the history of AMG included the first four-valve V8 of 1984, which generated 250 kW/340 hp from a displacement of five litres, and the 6.0-litre eight-cylinder engine with 283 kW/385 hp. The 368-kW/500hp, 5.5-litre supercharged V8 engine in the SL 55 AMG, the supercharged AMG V8 engine generating 460 kW/626 hp in the Mercedes-Benz SLR McLaren and the AMG V12 biturbo engine with an output of 450 kW/612 hp and 1000 Newton metres of torque are further highlights in the history of AMG engine technology. 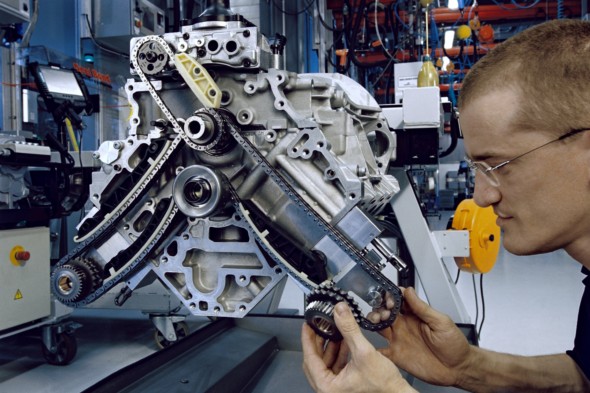 In 2003 and 2004, both the AMG 5.5-litre supercharged V8 and the AMG 6.0-litre V12 biturbo engine took first place against well-known competitors in the “Best Performance Engines” category of the “Engine of the Year Awards”.

Two of a kind