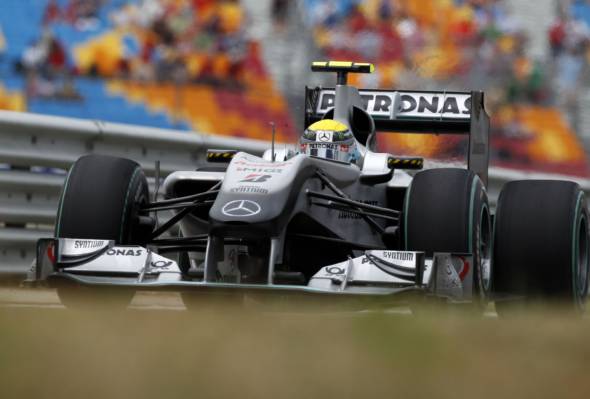 Michael Schumacher and Nico Rosberg will share the third row of the grid for the Turkish Grand Prix at Istanbul Park on Sunday after qualifying their MGP W01 cars in fifth and sixth places respectively today.

With temperatures slightly cooler than for the practice sessions on Friday, the MERCEDES GP PETRONAS pair progressed easily through Q1 with just one run each on the harder prime tyres. An initial run on the prime and a second run on the option tyres saw Nico and Michael through Q2 in fourth and tenth positions. 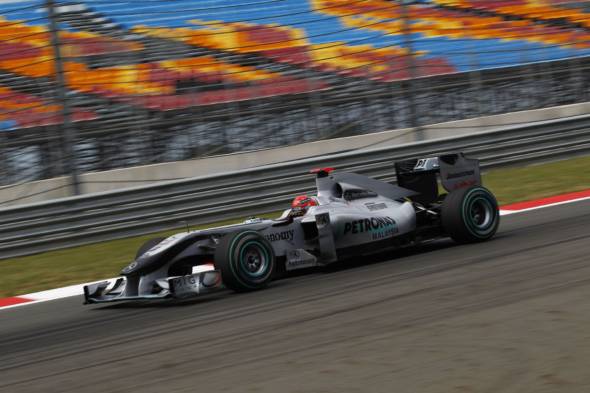 Both drivers had two sets of new option tyres saved for Q3 and set their fastest times on the first of their two three-lap runs. Michael ran wide on the exit of turn eight on his second run and ended the session in the gravel.

“I am quite happy with my qualifying today and I really think that we have made a step forward. If you consider that this is a track which is aerodynamically demanding, you can clearly say the hard work of our guys paid off and I would really say thank you to them. What happened in turn eight was that it was my last go, the fast lap before was a good one, so obviously you try to push even more, especially as on this lap you can win time. I went out a bit wide and off it went. In my view, the side I am starting from tomorrow is an advantage as it is much cleaner. I have tried practice starts from both sides and felt my side was the better one. As for tomorrow’s race, I will certainly try to have a good start and try to achieve the best result possible.”

“It was a decent performance today and sixth place gives us a good opportunity for the race and we will aim to move up the field from there. I would have liked to have been a little further ahead of course. The car is feeling reasonable this weekend and although there is a very narrow set-up window, we have pretty much got there. It’s clear that we have made some progress with our aero upgrades and everyone at the factory has done a good job, so thanks for all their hard work. I am on the dirty side of the grid for the race tomorrow but it should have cleaned up now and it’s only a short run to the first corner. If I can have a good start and first lap, then we have the potential for a strong race.” 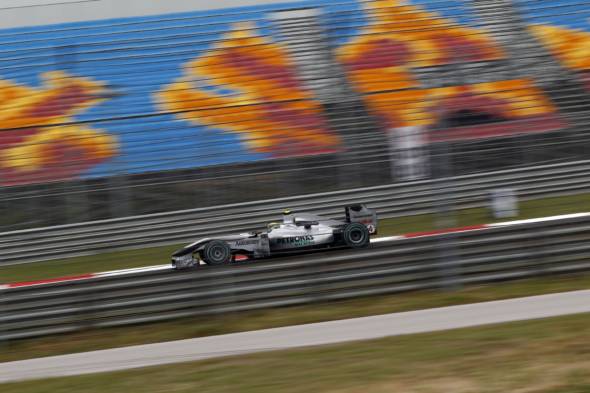 “A good qualifying performance from the team today after a lot of hard work here at the track and back at the factory on the latest developments for our car. Michael and Nico have been very evenly matched throughout the weekend and have worked well together to ensure that we have been able to get the new parts functioning and extract the maximum performance. Fifth and sixth positions on the grid gives us the potential to have a strong race tomorrow and we look forward to seeing what Nico and Michael can achieve. We’ve seen just how challenging the Istanbul Park track can be with turn eight catching out many drivers over the course of the day and Michael was no exception but thankfully there is no damage done.”

“That was a step in the right direction with Michael achieving P5, less than a tenth of a second behind P3, and Nico posting the sixth fastest time, less than two-tenths behind P3. Having said that, we are very aware that we are still almost six-tenths behind the superb pole time of Mark Webber and Red Bull Racing. However our speed compared to the front looks better than at the last ‘normal’ race track that we competed on in Barcelona. The step forward since then has only been possible through hard work, dedication and our aggressive development process. Thank you and well done to everybody in our team. We are not yet where we want to be but we are heading in the right direction.”