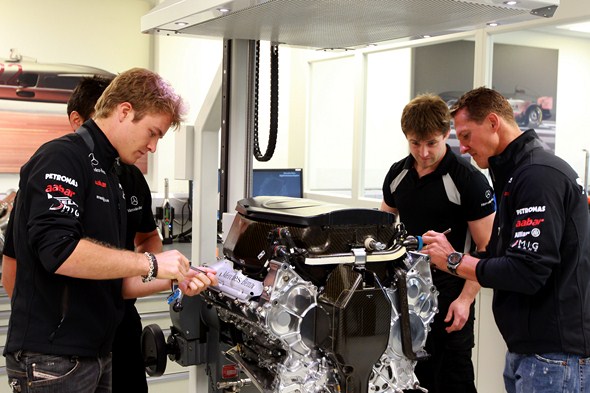 The 2011 Hungarian Grand Prix will be a race of anniversaries, including 100 Grands Prix for MERCEDES GP PETRONAS driver Nico Rosberg and 200 for the Mercedes-powered 2009 World Champion Jenson Button. But it will also mark a technological milestone for the sport, as the 2.4 litre V8 engine, competes in its 100th race. Here’s a summary of what the engine has achieved since its very first appearance at the 2006 Bahrain Grand Prix…

What has been the history of the 2.4 litre V8 engine since it was introduced in 2006?

Although the engine architecture and capacity has remained the same for the past five and a half seasons, the V8 engine has been operated under a wide variety of regulations. In 2006, development was free, although the engine had to last for two race weekends. For 2007, the engine was homologated (the start of the ‘frozen’ era) and had to last for two race weekends only including Saturday and Sunday – teams were free to use a different engine on Friday, to encourage them to run during practice, and ran to a maximum rev limit of 19,000 rpm.

These rules remained in force for the 2008 season. Since the start of 2009, each driver has been able to call on a pool of eight engines for the entire season, and the maximum engine speed has been fixed at 18,000 rpm. In both the 2009 and 2011 seasons, the engine was also adapted to incorporate the KERS hybrid system. 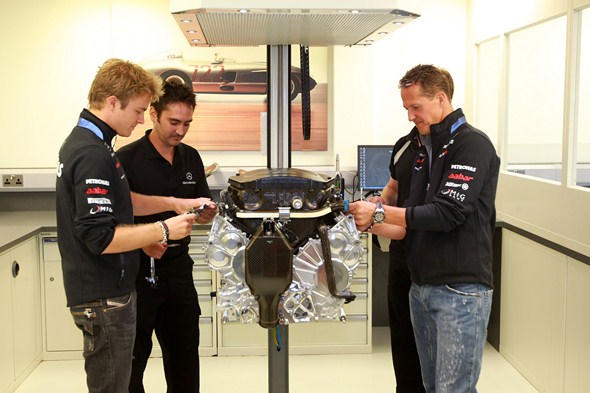 What are the basic specifications of the engine?

The 2011 engine is codenamed FO108Y and is designed and developed by Mercedes-Benz HighPerformanceEngines in Brixworth, UK. It has a maximum capacity of 2.4 litres, while its architecture is fixed at eight cylinders in a ‘V’ configuration, with a bank angle of 90 degrees. The engine’s minimum weight is fixed by regulation at 95 kg, and it develops over 750 bhp. 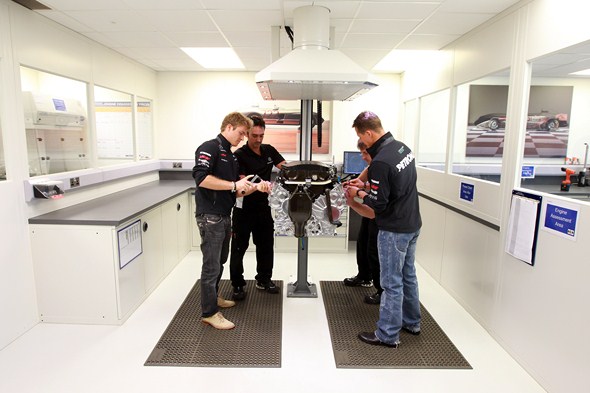 How much mileage does the V8 engine now do? 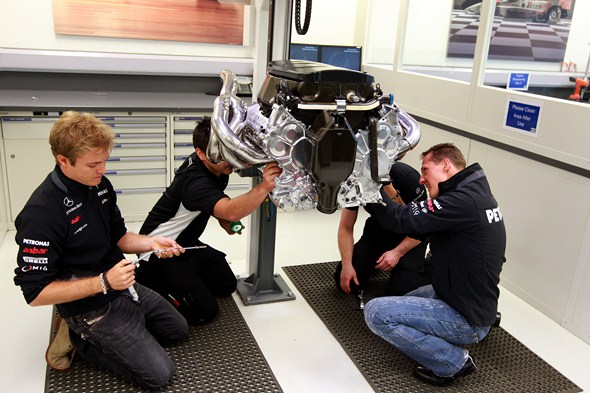 How many wins has the Mercedes-Benz V8 engine taken? 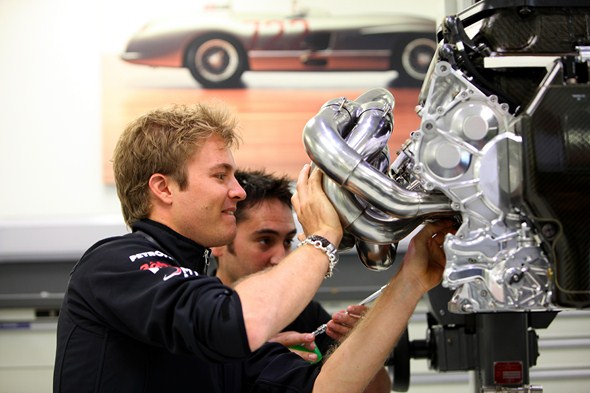 What other statistics has the engine accumulated?

In its 99 races so far, the engine has achieved 30 pole positions, 25 fastest laps and a total of 94 podium finishes with four teams – MERCEDES GP PETRONAS, McLaren-Mercedes, Brawn GP and Force India. 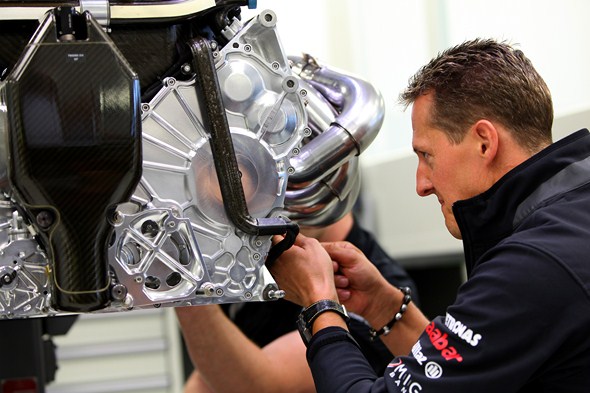 Has the engine achieved any particular milestones?

The Mercedes-Benz V8 was the first engine to score three race wins with one engine: in 2009, Jenson Button used engine FW049-01 to win races in Bahrain, Spain and Monaco. The unit went on to be used for Friday practice in Germany and Hungary, accumulating a total of 2,016 km. It also scored two pole positions (Spain and Monaco) and spent 72% of its racing laps in the lead. In the same season, engine FW058-01, used by Lewis Hamilton, also became the first hybrid-equipped engine in Formula One history to win a race, at the Hungarian Grand Prix. 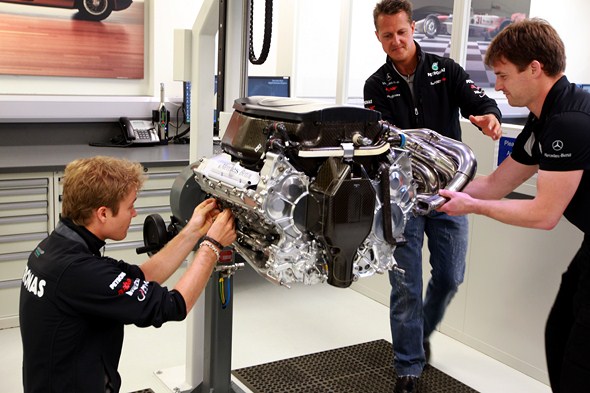 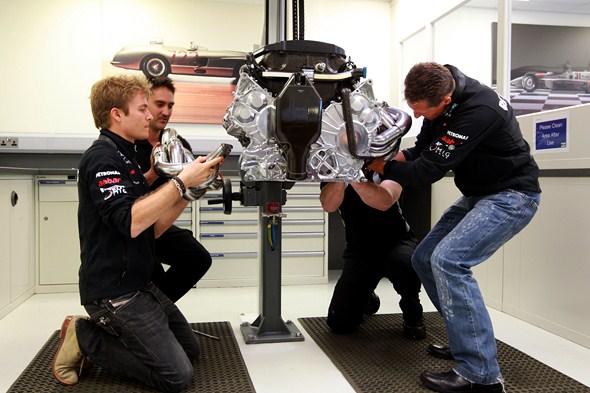 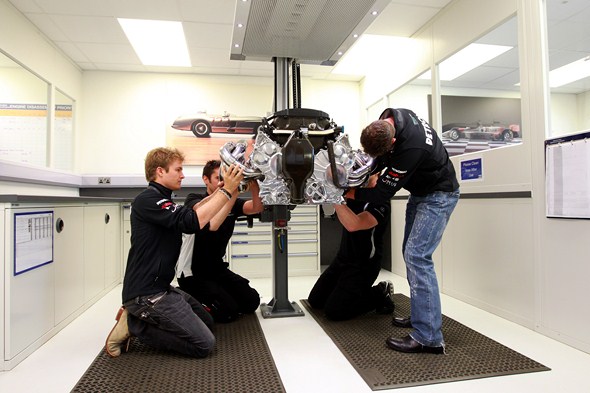 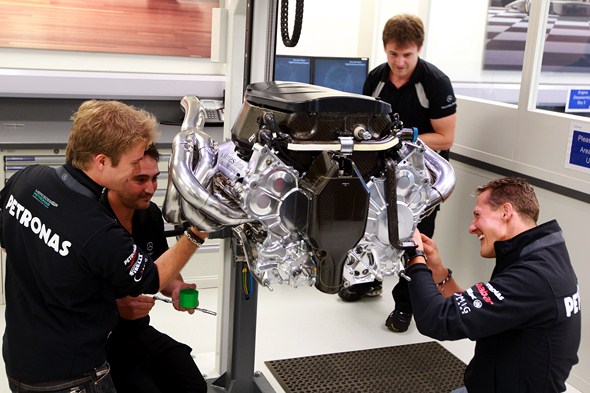 New engines for the E-Class

Kenneth Heyer follows in the footsteps of his father Hans Heyer