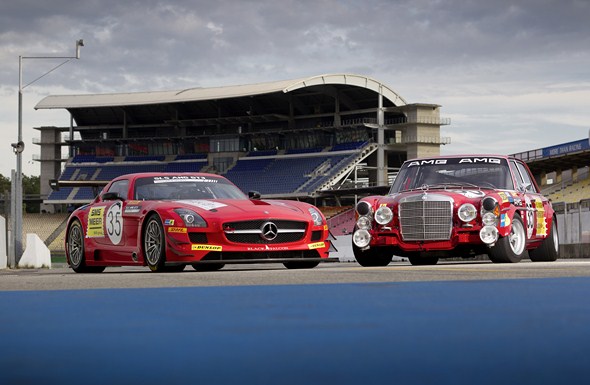 SLS AMG GT3 in the look of the legendary Mercedes-Benz 300 SEL 6.8 AMG

Affalterbach – On 30 July 2011 the customer team Black Falcon will be at the starting line of the 24-hour race in Spa-Francorchamps (Belgium) with the Mercedes-Benz SLS AMG GT3.

The gull-wing with start number 35 has been given the same look as the Mercedes-Benz 300 SEL 6.8 AMG with which Hans Heyer and Clemens Schickentanz achieved a class victory and overall second place 40 years ago. Among the drivers of the SLS AMG GT3 will be Kenneth Heyer, Hans Heyer’s son. A total of seven gull-wings will compete in this classic Belgian long-distance race. 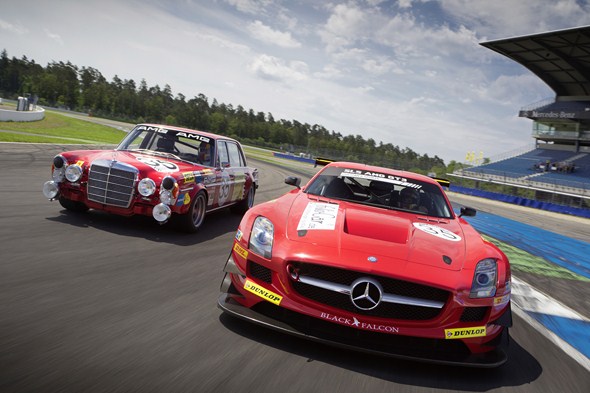 The 40th anniversary on the occasion of the 63rd 24-hour race in Spa-Francorchamps celebrates the astonishing success achieved in 1971, when the Mercedes-Benz 300 SEL 6.8 AMG won a class victory and second place
in the overall ranking on its first outing. 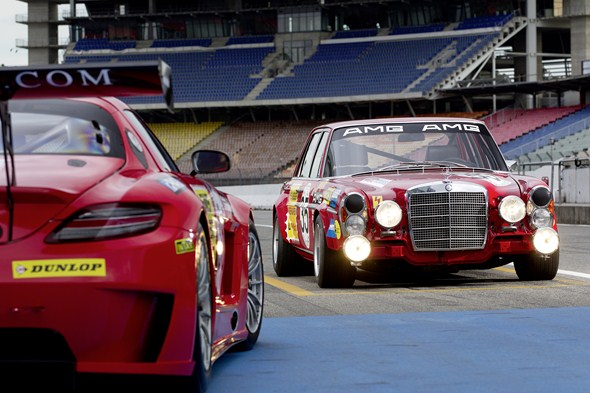 The SLS AMG GT3 is being entered by the private team Black Falcon, and is visually reminiscent of the legendary racing touring car that made AMG world-famous overnight. The red paint finish, the start number 35 and the sponsor stickers keep the memory alive, and almost give the two AMG racing cars the appearance of twins. 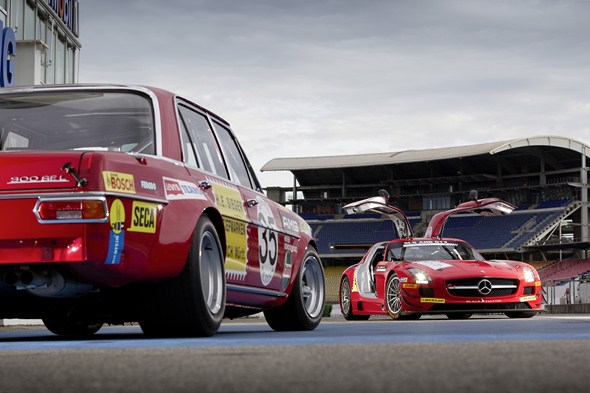 During the 24-hour race this very special gull-wing car will be driven by Kenneth Heyer (31, Wegberg), Thomas Jäger (34, Munich) and Stéphane Lémeret (37, Ophain-Bois-Seigneur-Isaac, Belgium). Kenneth Heyer has been an active racing driver since 2000, and on this 40th anniversary he is following in the footsteps of his father Hans Heyer, who achieved the sensational 1971 success for AMG with his team colleague Clemens Schickentanz on the same racetrack. 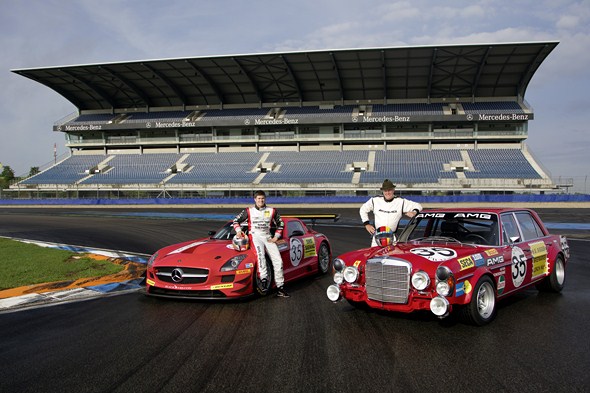 Kenneth Heyer: “It’s a great honour, exactly 40 years after my father’s success, for me to be bringing the Black Falcon SLS AMG GT3 to the starting line of the 24-hour race in Spa-Francorchamps. Together with my team colleagues, I will be trying to achieve at least second place. 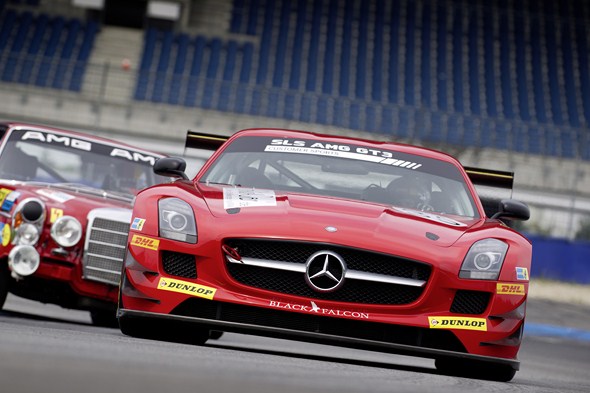 The car will no doubt attract plenty of attention in the line-up with its look reminiscent of the legendary Mercedes-Benz 300 SEL 6.8 AMG, but naturally the focus will be on a good racing performance. The SLS AMG GT3 has the potential for a place on the winner’s rostrum, but as we all know, a 24-hour race obeys laws of its own.” 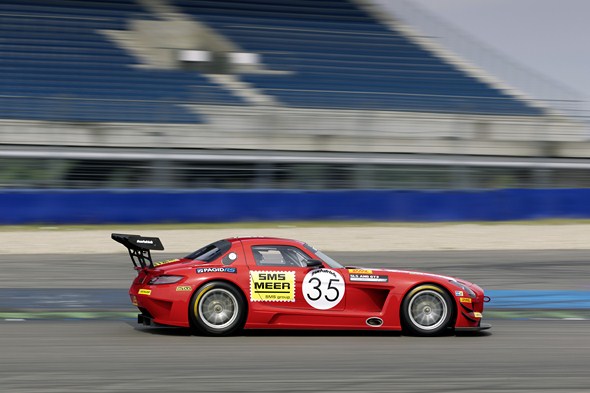 Hans Heyer: “40 years after our class victory and second overall place, I think it is a great idea to enter the Spa-Francorchamps race with the SLS AMG GT3 in the same look as “my” 300 SEL 6.8 AMG. Naturally I wish the Black Falcon team and my son Kenneth every success – and will be delighted if he wins at least second place!” 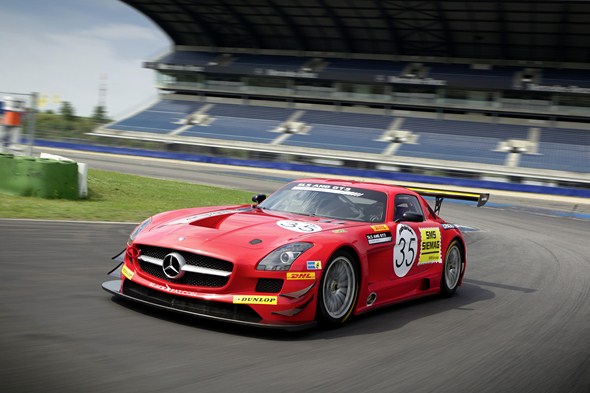 Ola Källenius, Chairman of Mercedes-AMG GmbH: “This project of entering an SLS AMG GT3 in the 24-hour race in Spa-Francorchamps with the same look as the Mercedes-Benz 300 SEL 6.8 AMG of 1971 deserves a round of applause. I wish Kenneth Heyer, his team colleagues and the Black Falcon customer team every success.

Naturally we at Mercedes-AMG also have our fingers firmly crossed for the other private teams who are competing in the race with the SLS AMG GT3. The customer sport programme for the gull-wing, which commenced in 2010, has made a good start, and the SLS AMG GT3 has immediately shown itself to be a racing car with great potential. To date we have sold 35 examples to private teams all over the world.” 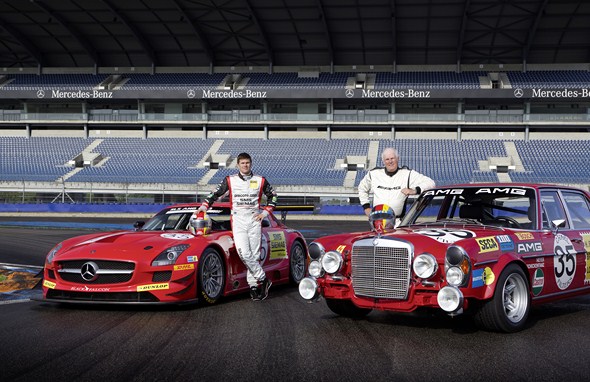 Hans Werner Aufrecht, founder of AMG and Chairman of the Supervisory Board at HWA AG: “For me this project is an outstanding example of how passionate commitment to motorsports can manifest itself. It is also impressive to see how AMG has developed 40 years after our second place in the 24-hour race in Spa-Francorchamps in 1971. I have my fingers crossed for Kenneth Heyer, and of course also the other teams who will at the starting line withthe SLS AMG GT3.”

In addition to Black Falcon with start number 35, six more SLS AMG GT3s will be competing in Spa-Francorchamps. The teams and drivers are as follows:

The 24-hour race in Spa-Francorchamps is one of the classic events in the international long-distance racing calendar. The race was first held in 1924, and until 1978 the 14.8-kilometre course was used. Since 1979 the race has been held on the shorter, 7.0-kilometre course.

This tradition-laden circuit in the Belgian Ardennes is the favourite racetrack of many drivers. 70 cars have been entered in this year’s 24-hour race, which comes under the FIA’s GT3 and GT4 rules. 250 drivers will be competing. The race starts at 4 p.m. on 30 July 2011.

Further information about the Mercedes-Benz SLS AMG GT3 is available at: www.mercedes-amg.com/slsgt3

AMG will commemorate the 1971 success with three show cars in the driver’s paddock in Spa-Francorchamps: the 300 SEL 6.8 AMG, the SLS AMG GT3 and, as an attraction, also the S 63 AMG “Thirty Five”. Right down to details, this high-performance saloon is modelled on the historic racing touring car of 1971, but under the bonnet is the AMG 5.5-litre V8 biturbo with direct petrol injection, spray-guided combustion and piezo injectors, which was introduced in 2010. 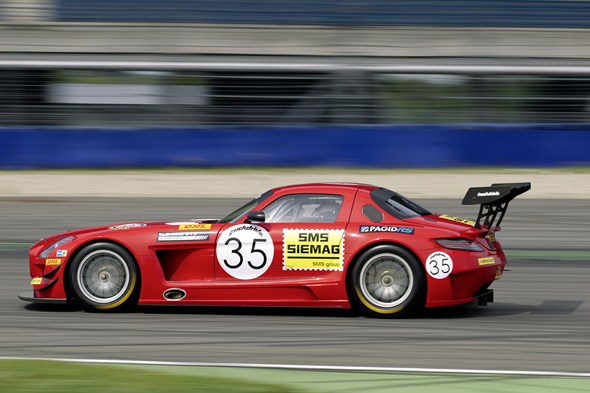 In standard configuration in the S 63 AMG, this AMG powerpack develops up to 420 kW (571 hp) and is regarded as the most efficient engine
in its segment.

Historic second place for AMG in 1971

In 1971 the 24-hour race in Spa-Francorchamps was the first race that AMG, founded in 1967, had ever entered. Alternating behind the wheel of the AMG touring car were the two experienced drivers Hans Heyer and Clemens Schickentanz. AMG was anything but the favourite in this classic Belgian long-distance race: mighty opponents at the time included the Ford Capri RS, BMW 2800 CS, Chevrolet Camaro, Opel Commodore and Alfa Romeo GTA. Nobody expected the large saloon from provincial Affalterbach in Swabia to hold its own against the well-established teams.

Surprising 5th place in the starting lineup for AMG

However, the red four-door saloon already demonstrated its potential in training, when Clemens Schickentanz delivered a surprise with the fifth-fastest training time. Nobody at AMG had expected 5th starting position in a field of 60 cars. 80,000 spectators were intrigued by the fast, red saloon with the long wheelbase – which was incidentally also the only Mercedes in the race.

Pole position was occupied by the favourite, the Chevrolet Camaro driven by Ivo Grauls and Peter Hoffmann, followed by the Alpina-BMW 2800 CS of Niki Lauda/Gérard Larousse and next to it the first works Ford Capri with Dieter Glemser and Alex Soler-Roig plus the Schnitzer-BMW 2800 CS driven by  Rauno Aaltonen and Helmut Kelleners.

A total of 60 racing touring cars raced against the stopwatch on the then still 14.1-kilometre long course in the Ardennes, with illustrious names such as Hans-Joachim-Stuck, Jochen Mass, Toine Hezemans, Willy Kauhsen, Achim Warmbold and Rainer Braun behind the wheel. 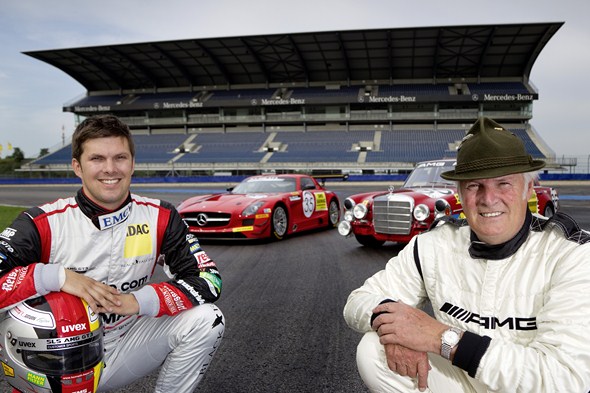 On the first lap Hans Heyer, who was first to take the wheel of the 300 SEL 6.8 AMG, was able to position himself in third place right behind the Ford Capri (Glemser/Soler-Roig) and the Chevrolet Camaro (Grauls/Hoffmann). After a dramatic race which included a sudden rainstorm at midnight and numerous contestants withdrawing, the “35” crossed the finishing line in second place directly behind the works Capri driven by Glemser/Soler-Roig. In 24 hours the AMG saloon had absolved precisely 308 laps. Technical problems? None whatsoever. An absolute sensation.

Contrasts: 265 km/h and exotic wood trim in the cockpit

Hans Heyer has fond memories of this race: “We knew we could win, but the others didn’t know it yet!” The AMG saloon was unbeatable on the straight, but the braking system substantially adopted from the series production car was slightly underpowered for the weight of the car (1635 kilograms). “But on the old Spa course the brake discs had plenty of time to cool down, and nobody could catch us on the long straights,” the now 68 year-old reminisces.

With a top speed of 265 km/h the 300 SEL 6.8 AMG was tailor-made for the fast Belgian circuit. The atmosphere in the interior was luxurious, with standard features such a power steering, air suspension, carpets, door panelling and a dashboard with exotic wood trim. The spectators lining the track loved this large car with its thrilling V8 sound. “The outsider quickly became the absolute darling of the public,” says Hans Heyer.

Luxury: the Mercedes-Benz 300 SEL 6.3 as the basis for a racing car

Durability was improved by installing an auxiliary oil cooler and a finely balanced crankshaft.

The wheel arches were flared to make room for the lightweight 10 x 15 and 12 x 15-inch magnesium wheels adopted from a C 111 test car. Aluminium doors helped to reduce weight from the original 1830 to 1635 kilograms. Larger control arms at the front axle, a more robust rear axle with a reinforced differential and smaller air suspension bellows with a harder setup made the saloon fit for the racetrack.

The unexpected class victory and second overall place in the 24-hour race in Spa-Francorchamps made AMG, founded in 1967, a household name overnight – and marked the start of an impressive success story. Even the German television news reported on this surprise achievement. “It was certainly a sensation at the time,” AMG founder Hans Werner Aufrecht remembers. The courage shown by Aufrecht and his partner Melcher in entering a modified luxury saloon for this classic 24-hour race paid off in full.

However it competed in the 24-hour race in Nürburgring in June 1972, and in the Nuremberg 200-mile race held at Norisring on 6 August 1972. Here Hans Heyer achieved victory with the four-door saloon – once again painted red – in the “Series and special touring cars above 2000 cc” class. 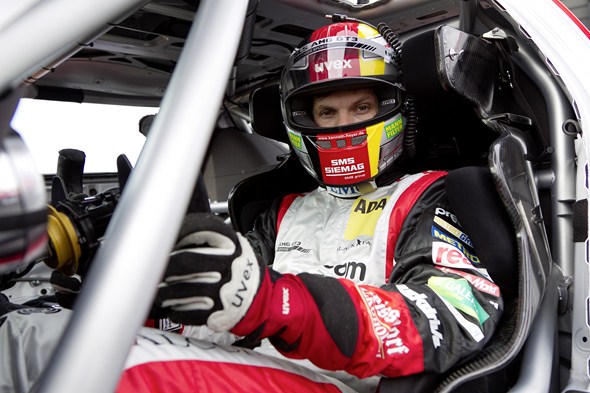 The 300 SEL 6.8 AMG was not to enjoy any further successes: a change in the race rules by the Fédération Internationale de l’Automobile (FIA) put an end to its career, as only cars with an overall displacement of up to five litres were now allowed for the European Touring Car Trophy. AMG sold its racing saloon to the French conglomerate Matra, where it was converted for high-speed tests on aircraft tyres.

Its subsequent fate is unknown. In spring 2006 Mercedes-AMG built a replica of the 300 SEL 6.8 AMG based on the original documentation, so that this unique success story would live on.