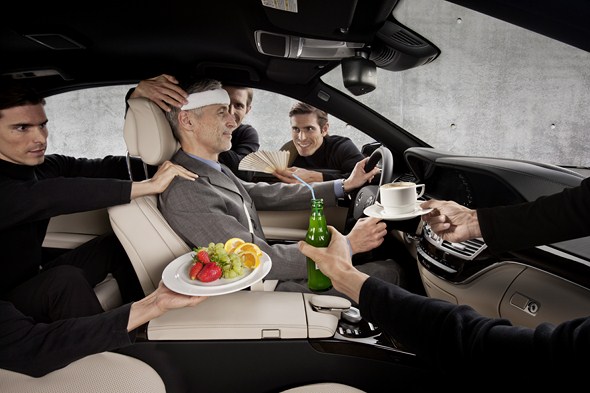 Mercedes cars take on the role of personal coach

Stuttgart. What could be better than a personal coach with a tailor-made training programme to enhance your fitness and general well-being, on hand to support you at any time of the day or night? Tomorrow’s
Mercedes-Benz cars will take on this very role.

Active Comfort, defined as “performance-enhancing comfort”, provides for well-being, recuperation and subsequent fitness at the wheel. The experts from Mercedes-Benz Cars and Mercedes-Benz Trucks are working closely together in this field: a number of ideas from the Daimler research vehicle “TopFitTruck” will feature on board future series-production passenger cars from Mercedes-Benz.

Ever more people are spending ever more time in cars. At the same time, health care and health insurance expenditure is rising and the wellness market is booming. The Germans alone spend around 70 billion euros on wellness annually. In future, “star treatment” from Mercedes-Benz will attend to all on‑the-road wellness needs.

Active Comfort sees Mercedes-Benz opening up a new dimension. “The Mercedes-Benz becomes a personal coach”, explains Jörn Petersen, Head of Human Factors at Daimler AG. A tailor-made fitness programme keeps the driver in good shape to master the demands of driving the vehicle on a sustained basis.

And well-being in the vehicle is supported both actively and passively by addressing all the senses more intensively than has previously been the case. An insight into the ideas occupying the Daimler experts is provided by the “TopFitTruck” research vehicle, which is a wellness oasis and fitness studio in one. Some of the ideas explored in this vehicle will soon feature on board series-production vehicles from Mercedes-Benz.

The possibility of making effective use of “power napping” for recuperation purposes will play a key role in the Active Comfort concept from Mercedes-Benz. This brief, deep sleep has become firmly established in many different languages and cultures: what is known in Britain and America as a “power nap” is a “turbosieste” in France, an “inemuri” in Japan, “Turboschlaf” in Switzerland and “Nickerchen” in Germany.

Sleep researchers confirm that this brief sleep of up to 20 minutes’ duration enhances concentration, reactions and general performance substantially.

Mindful that only a relaxed driver is a safe driver, Mercedes-Benz has been conducting research in this complex field of “driver-fitness safety” for many years, and systematically uses its findings to improve the models in series production. As a result, Mercedes drivers demonstrably remain fit and retain their powers of concentration for longer.

Their health benefits, too: “People who feel relaxed behind the wheel, take the right sort of break in good time and are supported in their seat by innovative technology have a good chance of avoiding the back trouble which has become a ‘national ailment’.

Stress is a key cause of back complaints, which even afflict the majority of young people today,” confirms renowned Bochum-based doctor Prof. Dr Dietrich Grönemeyer. He served as a sparring partner in the development of the “Active Comfort” concept, in order to corroborate the research findings with views from outside.

Wellness oasis and fitness studio: the “TopFitTruck” from Mercedes-Benz

“Drowsiness at the wheel is one of the most common causes of accidents in goods transport. The research carried out with the ‘TopFitTruck’ has demonstrated that truckers who do not sleep well or do not enjoy a sufficient amount of sleep at night drive more erratically”, explains Siegfried Rothe, Head of Condition Enhancement, Group Research at Daimler.

There is also an economical and ecological dimension: “Our investigations have revealed that tired truckers consume around one litre of diesel per 100 kilometres more than their counterparts who sleep well,” Rothe elaborates. 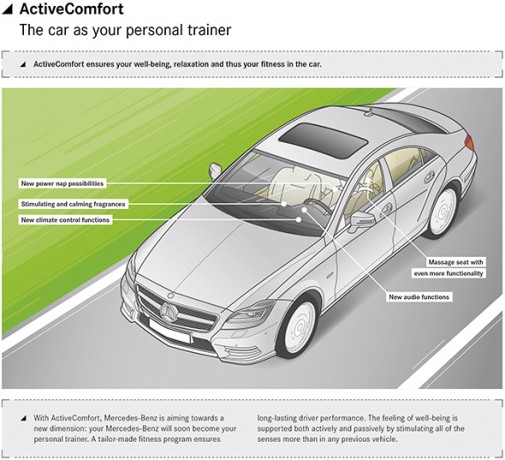 The declared aim of the work with Daimler’s “TopFitTruck” research vehicle was thus to improve working conditions and, in turn, the quality of life for drivers in long-haul trucks. Daimler Trucks has realised numerous ideas for improved ergonomics and added comfort in this yellow-painted semitrailer tractor.

Many innovations, such as improvements in the area of noise insulation and fresh air management, have already been incorporated into the new Actros generation. The technology transfer to passenger car models is now impending.

This represents a reversal of an established trend, as in recent decades passenger car innovations have generally led the way, with developments such as power steering, ABS and ESP®, air conditioning or subsequently improving working conditions for truckers.

The cab of the “TopFitTruck” is equipped with a massage seat, steering wheel cushion, a wider bed and a perfume atomiser. The latter device emits a stimulating menthol fragrance while on the road or supports power napping during breaks with an orange fragrance. For a particularly relaxing nap, the massage seat in the “TopFitTruck” moves into a raised position. The driver is then able to rest his legs on a round cushion which is fitted over the steering wheel.

The intelligent hi-fi system also aids power napping, its software automatically categorising pop and rock titles according to whether they are in a relaxing or enlivening vein. The system then selects songs depending on whether the driver is dozing off or waking up, playing them with a pleasant fade-in and fade-out effect.

The wake-up function also takes account of the driver’s sleep phases, avoiding waking him from deep sleep, which would leave him feeling drained.

It is also possible to carry out regular fitness training to keep the driver fit and healthy on a sustained basis. Expander bands can be attached to lugs in the cab roof and floor. The experts at Daimler have teamed up with doctors and physiotherapists to develop a special exercise programme for truckers. The training focuses especially on the muscles which come under particular strain on long-haul trips. Short videos on the screen in the cab outline the individual exercises.

The “TopFitTruck” is an interdisciplinary project – apart from the Daimler experts, musicologists, sports scientists, sleep researchers, human biologists, psychologists, traffic scientists and cytophysiologists have also been involved in the development process.

All in the service of a relaxed driver: driver-fitness safety

Optimum driver-fitness safety is an essential factor in the Mercedes-Benz philosophy of performance-enhancing comfort, and is one of the high-priority targets for development. The experts from Mercedes-Benz have based their work in this area on scientific investigations, including medical trials.

The pulse rate, for instance, is one of the most important indicators of driver well-being and strain, as well as their concentration and performance levels. One of the key findings: the faster the heart is beating, the more strained the driver is and the greater the likelihood of making an error in critical situations.

Hallmark Mercedes-Benz energising comfort derives from the combined effect of numerous, perfectly coordinated individual measures: the interior offers adequate space for people of all sizes, for example, and the seats can be adjusted perfectly to individual requirements.

A good suspension and soundproofing of the engine keep noise and vibrations at bay. The air-conditioned interior ensures a “cool head” at the wheel in the truest sense of the word. The positive effect of readily accessible switches and controls is further enhanced by LINGUATRONIC voice control.

These and other intelligent systems such as the rain sensor relieve the driver of numerous routine tasks which would otherwise require his attention and cause him to tire more quickly. And ATTENTION ASSIST features on board all Mercedes-Benz as standard to warn of any signs of drowsiness.

Another important factor here is efficient interior climate control, which is perfectly tuned to the occupants’ requirements in a Mercedes-Benz. The air conditioning system has a direct influence on well-being, fitness and concentration, as it allows drivers to literally keep their cool, even at extremely high outside temperatures.

When the air conditioning is switched off, a clear deterioration in overall driver fitness can be detected after just a few miles of driving, as has been verified by independent medical experts: the body temperature rises and the powers of comprehension worsen. This leads to premature driver fatigue, faltering concentration and slower reactions.

Measurements of spinal column movement provide a further indication of the strain placed on the driver. A poorly upholstered or poorly adjusted seat has been shown to tire the driver faster in the same way as a high interior temperature.