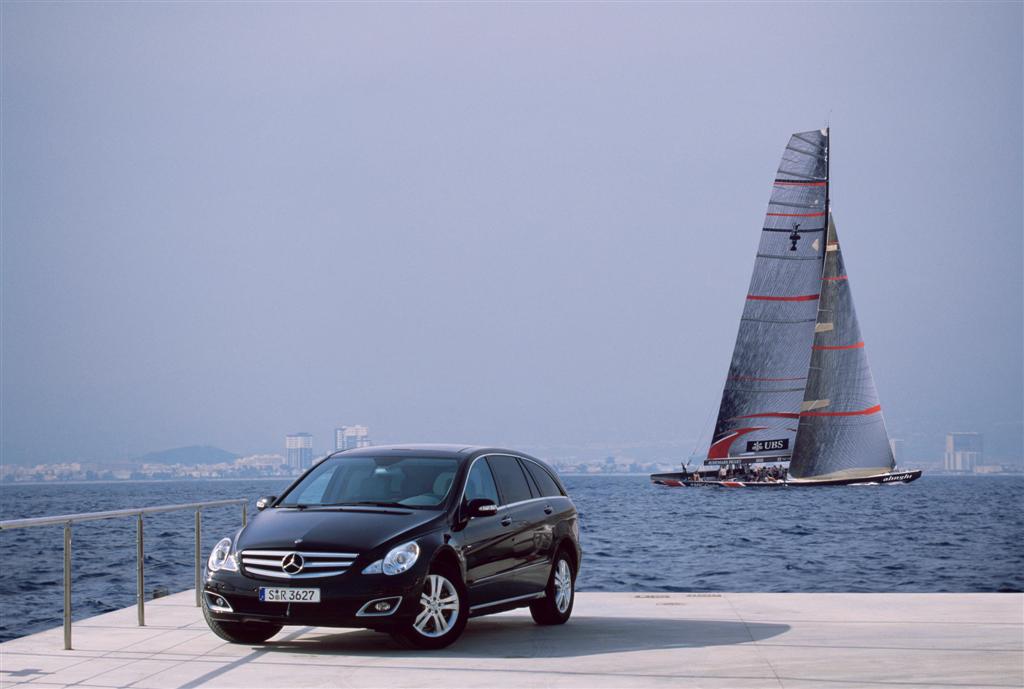 Valencia, One year after its world debut in New York, the Mercedes-Benz R-Class is the focus of an unusual conceptual comparison as part of a workshop. In Valencia it will encounter the Americass Cup yacht Alinghi, which is due to defend the title in the 2007 America’s Cup. Both car and yacht combine practicality with elegance and dynamism based on the very latest technology shared attributes which are interpreted completely differently in each case. The result is a versatile and comfortable touring SUV on the one hand, and a Cup Racer uncompromisingly configured for maximum performance on the other.
With the innovative R-Class, Mercedes-Benz has once again confirmed its role as the trendsetter among vehicle manufacturers. This touring SUV combines the advantages of familiar vehicle types such as a sporty saloon, estate car, van and sports utility vehicle (SUV) into a new, distinctive concept. Form and function come together in the design of the R-Class: the extremely spacious interior provides exemplary safety and first-class comfort for up to six occupants, accompanied by attractive styling and dynamic performance characteristics. 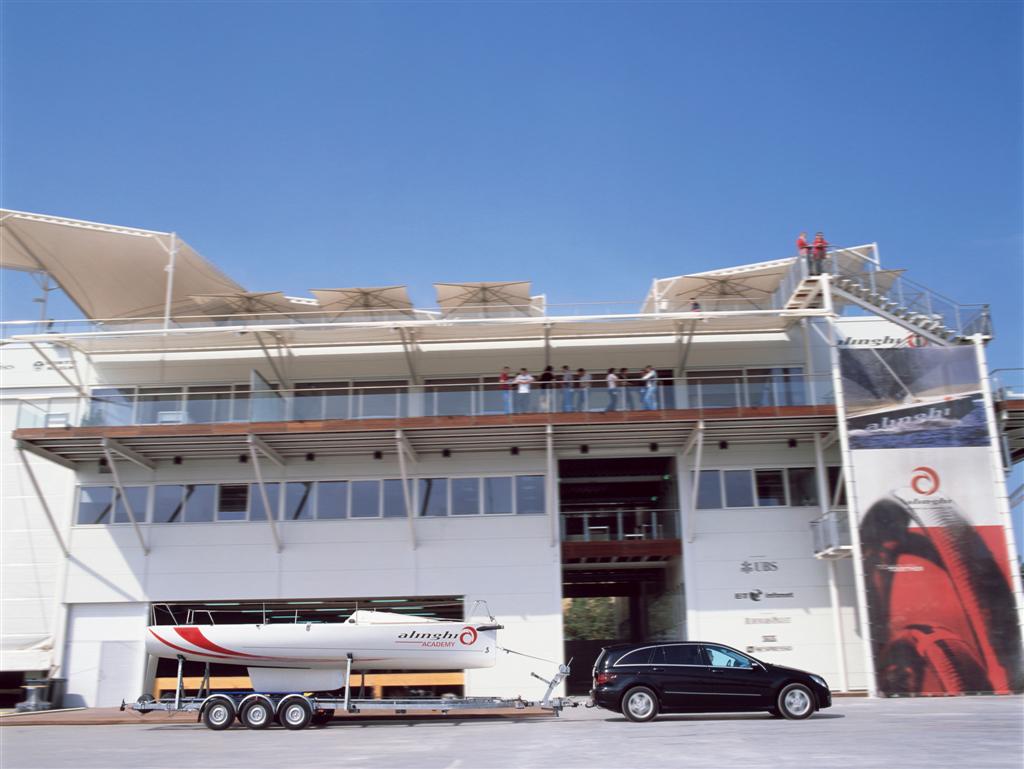 Striking design lines also characterise the America’s Cupper Alinghi, though in contrast to the R-Class it knows only one purpose, namely to be faster than the other yachts. Accordingly its design uncompromisingly follows the principle that “form follows function”, with just as little regard to comfort as in a Formula 1- or DTM racing car. The only thing that counts for German sports director Jochen Schumann and his team is speed and endurance under extreme conditions. The regatta yacht was designed solely with these in mind from the tip of its 33,5-metre high carbon fibre mast to the 20-tonne keel bulb below the hull. The hull itself weighs only two tonnes, but must withstand compressions of up to 50 tonnes of the rig. 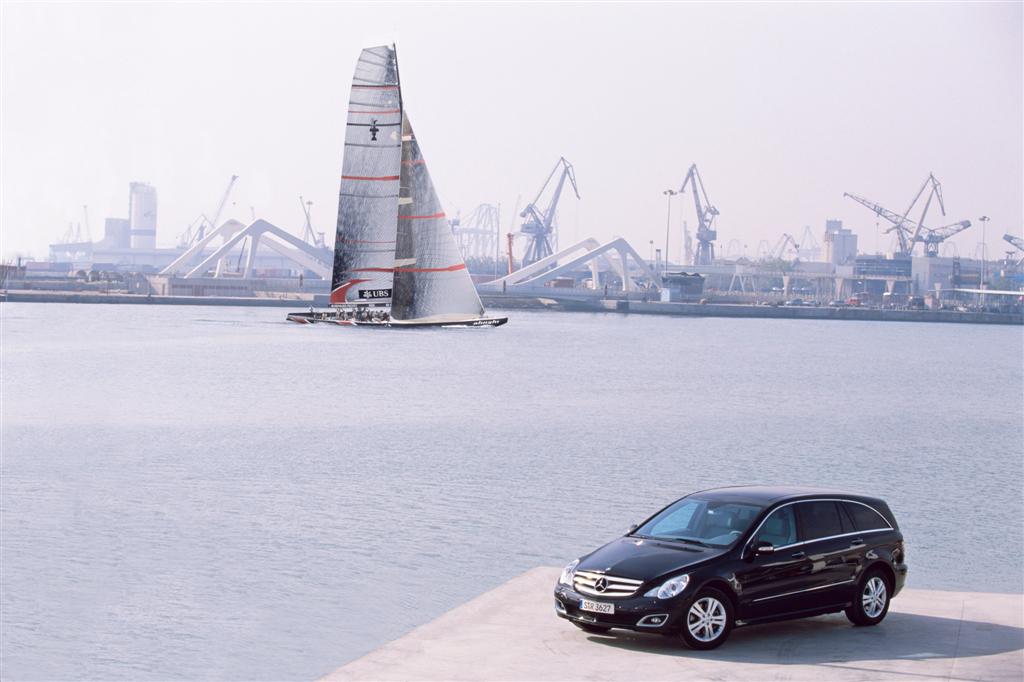 Both the R-Class and the Cup-Racer Alinghi must reach their destination by the quickest and shortest route. The navigation or “helmsmanship” of the car is based on concepts and terms derived from seafaring: the R-Class is equipped with COMAND, a system which precisely pinpoints the position of the vehicle using GPS, calculates the desired route and takes its occupants directly to their destination. 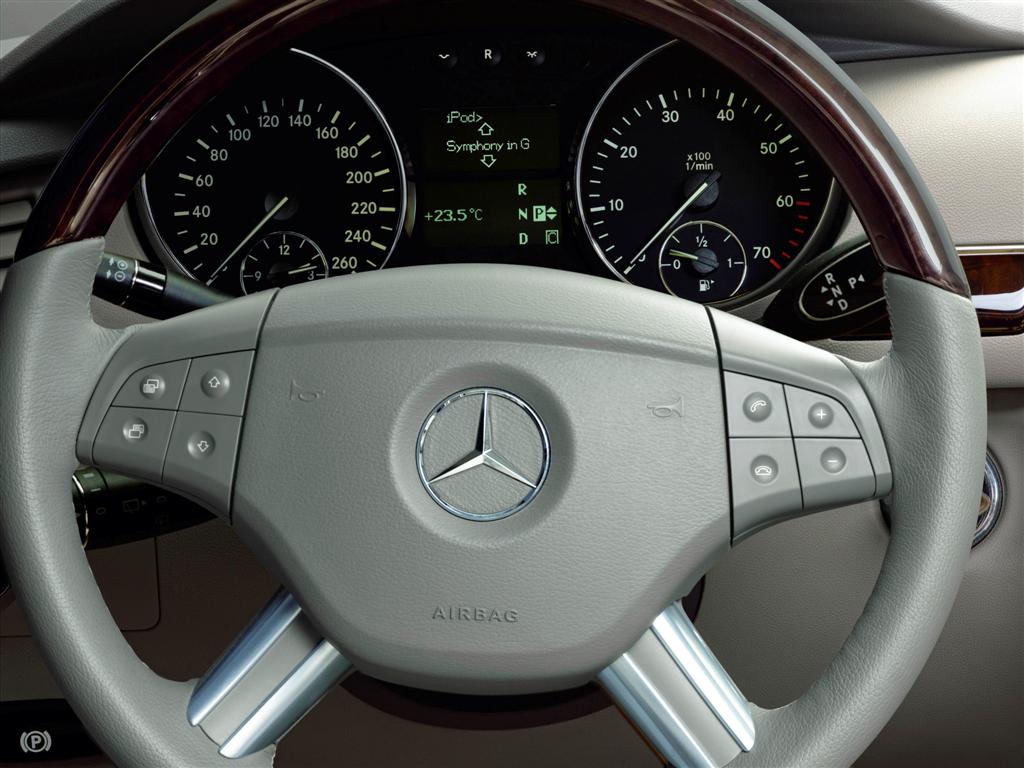 Navigating the yacht Alinghi is a real feat of helmsmanship. The vessels course is continually optimized by the crew, on the combined basis of satellite navigation and roughly 80 onboard electronic sensors which measure key parameters such as the wind and boat speed.

Once the right course has been set, the dynamic qualities of the R-Class come to the fore. Despite its extremely spacious and luxurious interior, the R-Class impresses with particularly sporty performance characteristics. The 375 kW/ 510 hp V8 engine of the new R 63 AMG accelerates the dynamic and elegant touring SUV from zero to 100 km/h in 5.0 seconds. The output range of the other petrol engines for the models R 350 and R 500 extends from 200 kW/272 hp to 225 kW/306 hp, while the six-cylinder diesel in the R 320 CDI has an output of 165 kW/ 224 hp.To provide optimal power transfer, all the models in the R-Class are equipped with the 4MATIC permanent all-wheel-drive system and the 7G-TRONIC 7-speed automatic transmission as standard. Electronic support systems such as 4ETS and ESP ensure that unlike the racing yacht, the R-Class also remains safely on course when driven at speed and confronted with unexpected situations. 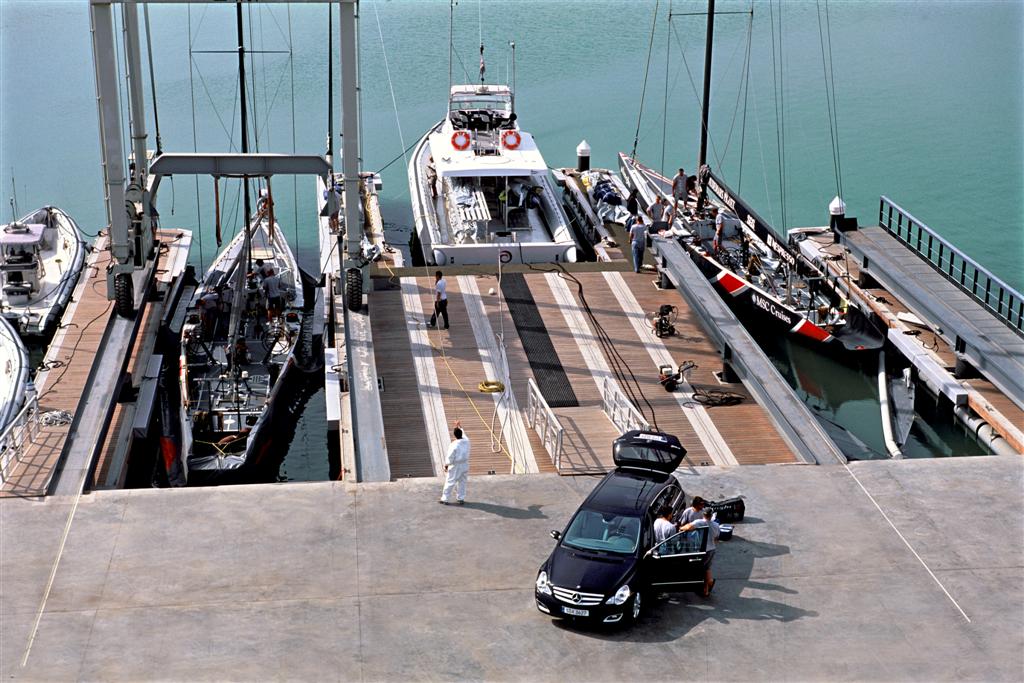 Getting the Alinghi up to speed is hard work. While gentle pressure on the accelerator is enough to accelerate the R-Class, the yacht crew needs to hoist up to 830 sq. m. of sails consisting of the mainsail (220 sq. m.), the foresail (150 sq. m.) and the enormous spinnaker with almost 500 sq. m. to reach the maximum speed of around 20 knots (37 km/h). Steering and trimming the sails must be done by the crew themselves, using muscle-power assisted by grinders. 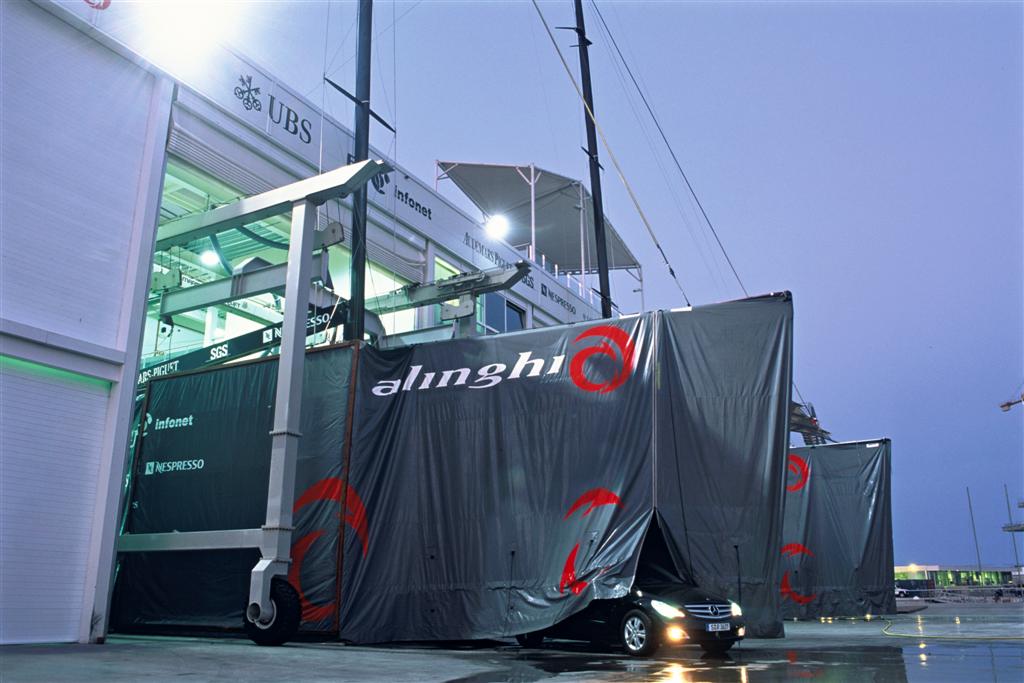 In contrast to the continuous activity taking place on the Alinghi, the new R-Class is a haven of calm and safety where generosity is the order of the day in every respect. The variable interior seats up to six occupants in luxurious comfort, and has a maximum load capacity of 2,385 litres.

The space on board the Alinghi is entirely devoted to practical considerations. Despite the maximum load capacity of 60,000 litres, the yacht has no seats whatsoever for the crew. The 17-man crew is distributed over a beam width of three metres and a boat length of 24,5-metres, and each member is assigned a specific workplace for his respective task. 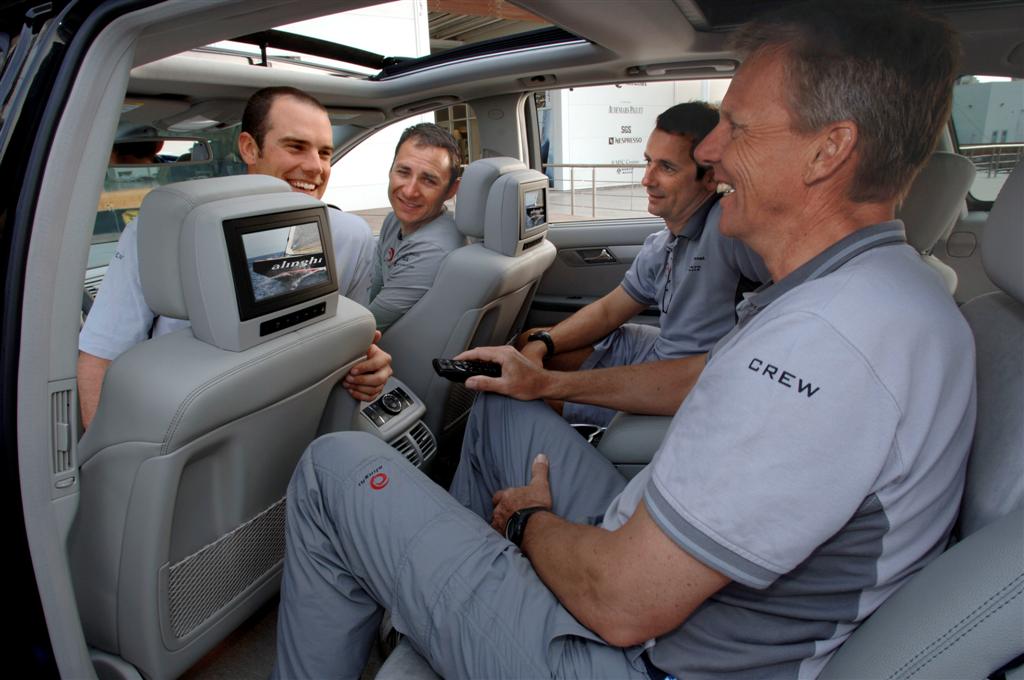 R-Class meets Alinghi a versatile and comfortable touring SUV on the one hand, and a Cup Racer uncompromisingly built for maximum performance on the other.

Mercedes-Benz is the “official supplier” to the Swiss Americas Cup Team Alinghi, which has established its base in a futuristic building next to the other eleven teams – in the Spanish port of Valencia. In addition to sailing, Mercedes-Benz is involved in other top-class international sports such as tennis and football.