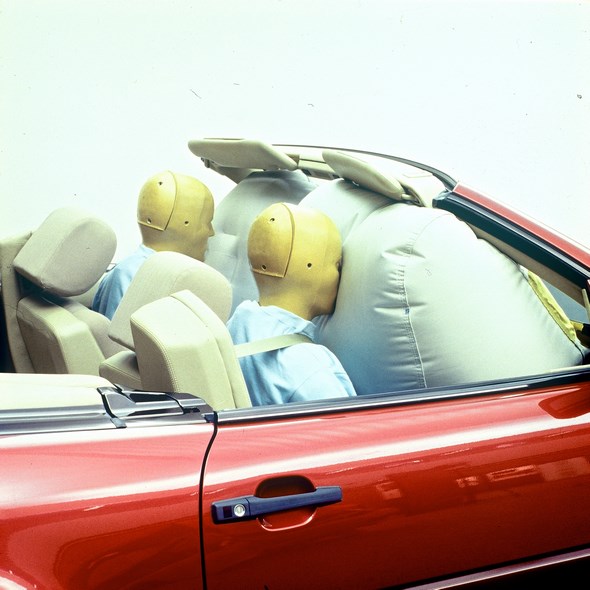 A Mercedes-Benz vehicle can never be safe enough. That is why the Stuttgart-based brand is continuously advancing the pioneering airbag technology. The first major milestone was the driver’s airbag in 1981.

The next significant step, the front passenger airbag, débuted 30 years ago in the spring of 1988, likewise in the 126 model series. Since then, many more protective airbags as elements of passive vehicle safety have followed. Among them the window airbag, presented 20 years ago in the E-Class of the 210 model series.

Today, numerous airbags are an inherent part of the integral safety concept of Mercedes-Benz. 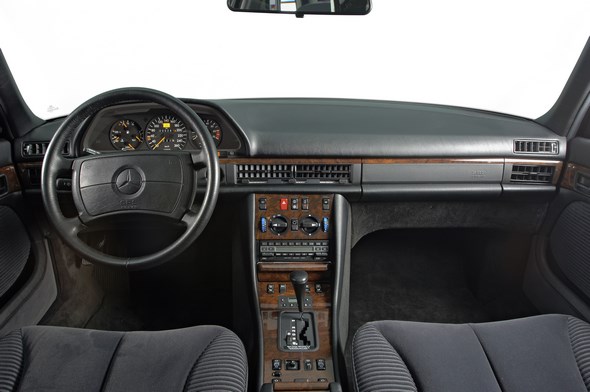 Stuttgart. The protective airbags in the glove compartment and in the roof frame are celebrating birthdays: For 30 years the front passenger airbag and for 20 years the window airbag have been part of the continuously growing family of these potentially life-saving components in Mercedes-Benz vehicles.

Today, the system is a component of integral safety and comprises up to a dozen different airbags in a single passenger car. They range from the knee airbag and the belt airbag in the rear to the thorax/pelvis side airbag.

Airbag development at Mercedes-Benz began as early as in 1966, with the company registering the corresponding patent (patent specifications document No. DE 21 52 902 C2) in October 1971. As the first production-ready solution, the driver’s airbag was introduced in the S-Class of model series 126 in 1981.

This was a milestone in the passive safety of Mercedes-Benz. Due to its fundamental importance, this innovation was quickly adopted by the entire auto industry. 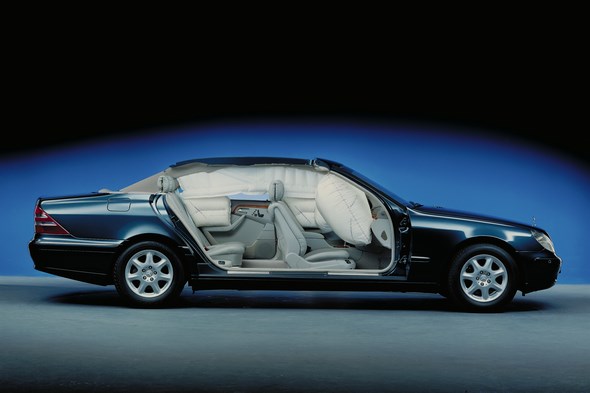 Little has changed in the basic principle of the first airbag to the present day: the sensors of the trigger unit register the particularly strong deceleration occurring in typical accidents and activate the airbag mechanism. In this process, nitrogen is abruptly released in the gas generator.

The gas inflates the cushion-shaped textile structure made of polyamide fabric with a rubberised inside – the airbag. This protective airbag cushions the movement of the human body and in concert with the seatbelt (and the belt tensioner and belt force limiter) dissipates the kinetic energy generated by the impact.

Today, many front airbags have an adaptive design: They are not deployed all at once, but in two stages. This makes it possible to adapt their effect to the severity of a collision as predicted by the vehicle sensors. 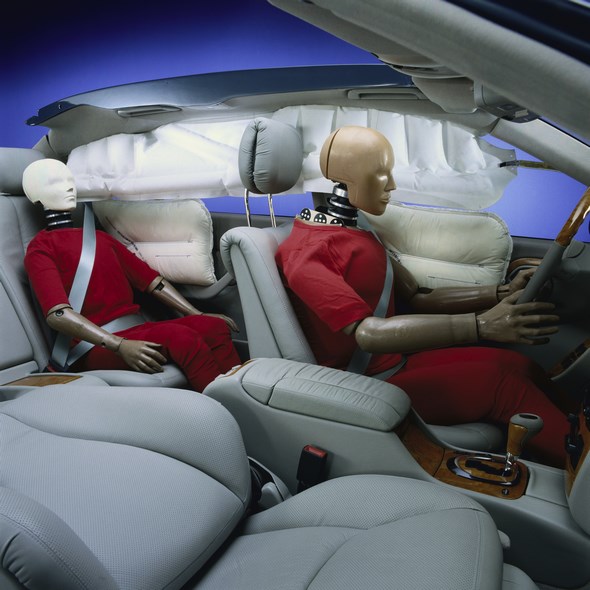 Consistent advancement
The airbag anniversaries of 1988 and 1998 are part of the tradition of tireless vehicle safety research at Mercedes-Benz. Because ever since the successful launch of the driver’s airbag in 1981, the Stuttgart-based brand has been advancing the principle continuously.

To this end, the engineers adapted the airbag to other areas of the vehicle and other accident scenarios. The first to benefit from this continuous development work was the front passenger: the front passenger airbag was a feature of passive safety not offered in this form by any other manufacturer at the time.

It was presented in September 1987 as an option for the saloons and coupés of the S-Class. After its début in the luxury class in early 1988, it also became available as an option for the upper mid-size vehicle segment of the 124 model series. Starting in August 1994, it became part of the standard equipment of many Mercedes-Benz passenger cars together with rear head restraints. In the S-Class and SL sports cars, it became part of the standard specification as early as 1992.

The first front passenger airbag still occupied the entire glove compartment 30 years ago. After all, inflated it had a volume of 170 litres. However, the miniaturisation of the components soon made significantly smaller units possible. That was also the prerequisite for using the protective airbag in other places inside the vehicle.

This was what developers were striving for, because a frontal collision, which causes the bodies of the driver and front passenger to be accelerated directly forward, is just one of many accident scenarios.

The side airbag, presented in 1993 and available in the E-Class starting in 1995, already aimed at providing lateral protection for passengers. This zone is also protected by the window airbag, which Mercedes-Benz presented in 1998. It unfolds like a curtain along the side windows in case of lateral impact. 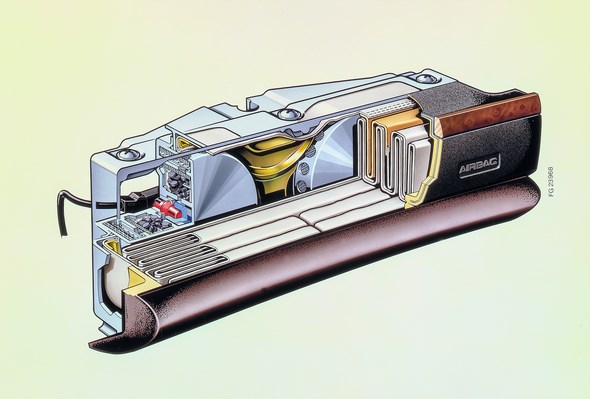 As a result, it is able to significantly reduce the risk of head injuries in particular for the driver, front passenger and passengers in the outer rear seats in case of lateral impact. When folded, the window airbag is stowed at the top in the roof frame.

Further innovative steps of Mercedes-Benz airbag development were the head/thorax side airbag (2001), the knee airbag (2009) as well as the thorax/pelvis side airbag, the belt airbag and the cushion airbag (2013).

From the very beginning, Mercedes-Benz made it clear that airbags do not replace the function of the seatbelt as the most important restraint system.

Rather, the two technologies are complementary and jointly enhance the level of safety. For some years now, combinations of both elements of passive safety have also been in use in Mercedes-Benz vehicles: The belt airbag in the rear presented in 2013 is an airbag integrated into the seatbelt.