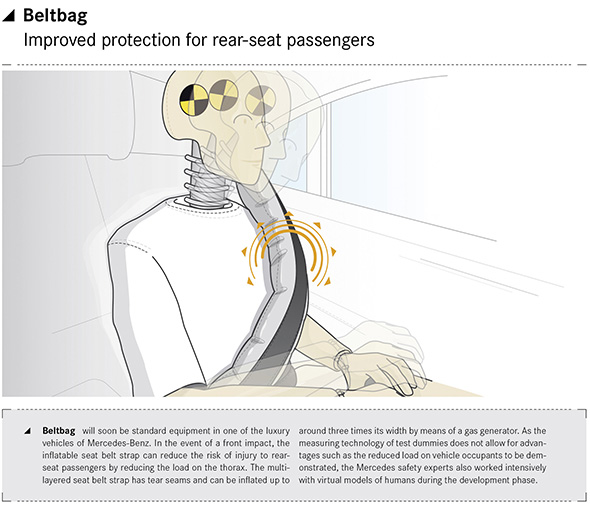 An airbag for seat belts

Stuttgart. The Beltbag, one of the highlights from the ESF 2009 Experimental Safety Vehicle, is due to go into production in a luxury-class model from Mercedes-Benz.

The inflatable seat-belt strap is able to reduce the risk of injury to passengers in the rear in a head-on collision by lessening the strain placed on the ribcage.

Should the crash sensors detect a severe frontal impact, the airbag control unit will trigger deployment and inflation of the Beltbag.

A gas generator then inflates the multi-layered belt strap with Velcro seams to nearly three times its normal width.

The resulting larger surface area is able to better distribute the force acting on the seat occupant, thereby reducing the risk of injury. 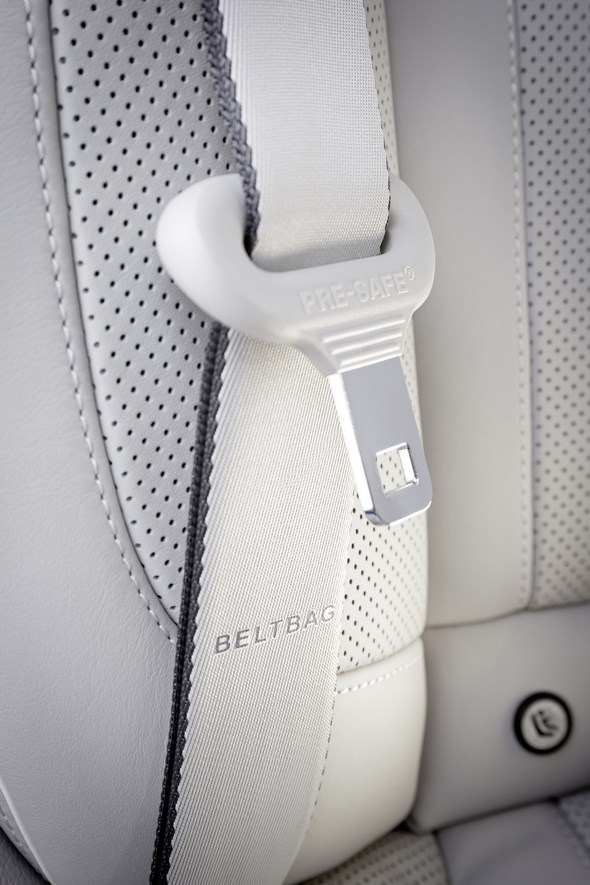 The Beltbag can be used in exactly the same way as a conventional seat belt. The belt strap’s design is different from that of the standard belt though, and received top marks in practical trials for being extremely comfortable to wear and for its extra-soft belt strap edge.

“Mercedes-Benz is pursuing its safety initiative in the rear of vehicles with the Beltbag,” comments Prof. Dr.-Ing. Rodolfo Schöneburg, Head of Passive Safety and Vehicle Functions at Mercedes-Benz Cars.

“After all, the excellent standard of safety offered by Mercedes-Benz doesn’t just apply to all model series, but to all seats, too.”

Just like the active seat-belt buckle recently presented by Mercedes-Benz that is likewise earmarked for inclusion in a luxury model, the Beltbag was developed with a particular view toward new markets.

There, the occupancy rate in the rear is as much as 30 percent, making it much higher than in Europe.

By introducing the Beltbag, Mercedes-Benz is further expanding the safety system for passengers in the rear – in contrast to many other manufacturers, seat belts in the second row of Mercedes-Benz models already come equipped with belt tensioners and belt force limiters.

It is not planned to introduce the Beltbag for the front occupants, as airbags are already included in the front on all models as a supplementary restraint system.

Because dummy measurement technology is not capable of quantifying the benefits resulting from a wider belt strap, such as the lower force exerted on occupants, the safety experts at Mercedes have also been working intensely with virtual human models, as such computer-generated models make it possible to obtain detailed findings on the biomechanical strain during a collision.

Clever cross between belt and airbag

For the first time, the new E-Class features beltbags for the passengers on the outer rear seats, as already introduced in the S-Class.

The seat belt is one of the most important inventions of the 20th century and has saved hundreds of thousands of lives.  It has been optimised over the years with the addition of belt tensioners and belt force limiters.

But its development is far from over: the belt strap can be widened with the introduction of the beltbag, an inflatable seat belt which further reduces the risk of injury in the event of an accident.

Mercedes-Benz first introduced this innovation in the latest S-Class and will also be offering it for the passengers on the outer rear seats in the new E-Class.

The beltbag is used in exactly the same way as a conventional seat belt. As its name suggests, it combines seat belt and airbag components.

The beltbag replaces the conventional belt strap in the 3-point seat belt system with an inflatable belt strap. It is woven from a single piece of material and features tear seams.

The beltbag is deployed in the event of a severe frontal collision. A gas generator on the belt’s end fitting inflates the belt strap to several times its normal width.

This enlarges the belt strap area in the upper body region so that the force is distributed more widely than is the case with a conventional belt.

This is of particular benefit to passengers whose bone structure is less flexible due to age or illness: another contribution to the Mercedes-Benz “Real Life Safety” philosophy.