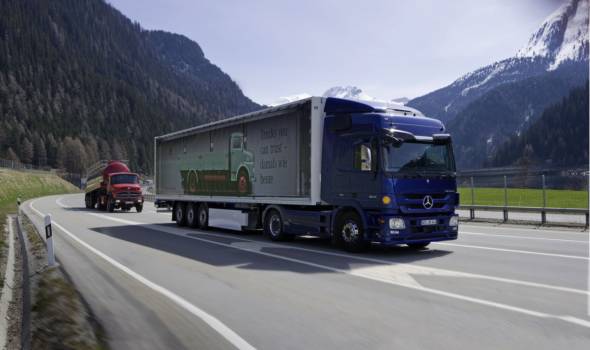 Chur, Switzerland – “In ten years time, commercial vehicles will consume 20 percent less fuel and reduce CO2 emissions by the same amount,” said Andreas Renschler, the Board of Management Member responsible for Daimler Trucks and Daimler Buses, about his vision during a comparative truck drive across the San Bernardino Pass in Switzerland. In his statement, Renschler set the bar pretty high for the engineers of the Stuttgart-based commercial vehicle manufacturer.

To overcome these challenges, the engineers will have to pull out all the stops, from enhancing the aerodynamics of the truck plus trailer or semi-trailer and fine tuning today’s conventional drive systems to using alternative fuels and perhaps partially hybridizing the powertrain. These measures will be needed because during the past several decades traditional vehicle technology has already been pushed to the limits of what is technically feasible. This is because fuel efficiency and economy have always played a key role in truck development. Huge advances were achieved in rapid succession, which is why a truck from the 1960s is hardly comparable with a modern long-haul vehicle. This is clearly demonstrated by the comparative Mercedes-Benz drive titled Transalp Trucking 2010 between contemporary trucks and their predecessors from a period extending over five decades.

Before the start of the current comparative drive, the engineers conducted extensive measurements of a modern Mercedes-Benz Actros 1844 and a 1964 model year Mercedes-Benz LP 1624, which they drove on a long-haul route from Stuttgart to Milan and back. The results showed not only a nearly 50 percent difference in fuel consumption and CO2 emissions per ton of payload, but also a drop in particulate matter and nitrogen oxide emissions of up to 98 percent. The physical and mental strain on the driver has also been significantly reduced, while transport performance has doubled and driving safety has improved substantially.

Transport performance, measured in tons per kilometer, is increasing in the European Union each year. According to the European Commission, transport performance amounted to about 4,120 billion ton-kilometers in 2006, having increased by 2.6 percent a year from 1995, when it totaled about 3,100 billion ton-kilometers. Road vehicles were the only means of freight transport to post increases in performance. There are concrete economic reasons for this. Not only has the efficiency of modern commercial vehicles improved dramatically, but also their active and passive safety, as well as their driving comfort, and, last but not least, their environmental compatibility.

Mercedes-Benz has played a pioneering role in all of these areas for decades. During the approximately 1,160 kilometer test drive from Stuttgart to Milan and back, the Mercedes-Benz LP 1620, which was one of the world’s most advanced trucks back in the 1960s, consumed almost 20 percent more fuel, for example, than the Actros 1844. The measurement results are even more impressive if fuel consumption is calculated in relation to payload. They show that the veteran truck consumes 2.34 liters of fuel per ton transported over a distance of 100 kilometers, while the Actros needs only 1.27 liters.

This represents an almost 50 percent reduction in fuel consumption and CO2 emissions. Other emission values have also been dramatically reduced, with NOx and PM concentrations in the exhaust gas almost 98 percent lower in the Actros 1844 than in the LP 1620. As a result, the Actros’ performance exceeds the requirements of the Euro 5 emissions limits. The Daimler engineers are now preparing for the Euro 6 standard, which will go into effect in 2014 and stipulate limits close to what is detectable with today’s technology.

While reduction of fuel consumption and emissions is one of the goals of the engine development engineers at Mercedes-Benz, their other aim is to increase performance and torque. These factors have a big impact on a commercial vehicle’s efficiency and economy, making them one of the most important selling points.

Back in 1960, a truck with an output of about 150 kW (200 hp) and 700 Nm of torque was still considered to be a powerhouse for the transport of 32 tons. Several truck generations later, it is considered appropriate in Europe for a truck transporting about 40 tons to have more than twice the output and three times as much torque. Today’s most powerful Actros engine, a 15.9 liter V8 unit, has an output of 440 kW (598 hp) and an impressive 2,800 Nm of torque. However, even a comparison of the 320 kW (440 hp) Actros with the veteran truck suffices to show the tremendous advances that have been made over the past 50 years.

During the comparative drive from Stuttgart to Milan and back, the Actros traveled at an average speed of 76 km/h while carrying a payload of 25 tons. The LP 1620 from 1964, on the other hand, carried only 16 tons and traveled significantly slower at an average speed of 58 km/h. The progress achieved in the past decades becomes even more evident if the travel times of the two trucks are compared. While the Actros took 12 hours and 36 minutes to travel the 1,159.6 kilometer route, the LP 1620 took almost eight more hours (the equivalent of an entire working day) to complete the same stretch, reaching the finish line after 20 hours and eight minutes.

Car drivers traveling behind the veteran truck needed a lot of patience as the old vehicle crossed the San Bernardino Pass, since it only managed about 29 km/h on the way up and no more than 36 km/h on the way down. The Actros, on the other hand, taxed the patience of the other drivers to a far lesser degree, traveling at about 45 km/h while going uphill and at up to 77 km/h while going downhill.

Driving safety that truckers can rely on

The driver of the 40-ton Actros semi-trailer truck can rely on the vehicle’s active and passive safety systems at all times. Mercedes-Benz introduced the ABS anti-lock braking system to heavy-duty trucks back in 1981. Great advances have been made in the development of brake technology, leading to the creation of a retarder that operates free of wear and tear for use as a supplementary braking system for an electronically controlled high-pressure brake. 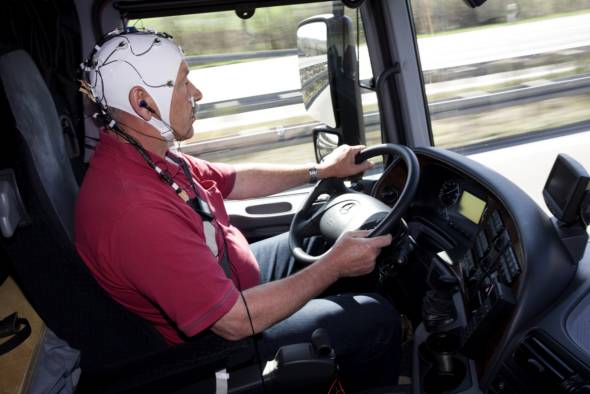 The progress is impressively demonstrated by the braking distance needed to decelerate the vehicle from 80 to zero km/h. In the case of the Actros this amounts to only 38.5 meters, whereas the LP 1620 needed 56 meters. The difference between the two distances is comparable to the length of four passenger cars. Other advances include the emergency braking feature Active Brake Assist as well as a whole series of state-of-the-art assistance systems that make trucks safer.

Some time ago Daimler researchers recognized that features truckers would once have called luxurious are in fact important basic equipment for reducing physical and mental strain on the drivers and thereby help them concentrate and prevent lapses in attention.

This equipment consists not only of cab air-conditioning as an alternative to simply keeping the window rolled down; it also includes a comfort suspension seat instead of a simple bench, and a comfort bed with a continuously adjustable-level control instead of a Spartan cot. Whereas clutches had to be pressed with a force of about 30 kiloponds for each gearshift, the truck today has a fully automated transmission. The progress made in this area is also demonstrated by the comparative test drive of the Actros and the LP 1620. On the stretch between Chur and Lostallo, where the trucks have to cross the San Bernardino Pass, the measurement devices in the Actros registered only 175 gearshifts, and none at all when a fully automated transmission was used. By contrast, the driver of the LP 1620 had to operate the gear stick a total of 290 times.

Driver stress in the Actros is also reduced by substantially improved sound insulation. The Megaspace cab has an extremely low noise level of 63 dB(A) at 80 km/h, which isn’t much more than a pronounced purr compared to the 72 dB(A) measured in the LP 1620. With so little noise to contend with, truckers can now have great fun driving while listening to music.

Thanks to state-of-the-art technology, driving safety, and comfort, drivers now are under much less strain than in the trucks of past decades, and the systems help prevent stressful situations altogether. For the first time ever, objective measurements were also conducted in a truck during the Transalp Trucking 2010. Electroencephalographic measurements (EEGs) of the drivers’ brainwaves were made to obtain insights into the mental strain suffered by truckers in stressful situations. To make the measurements, the drivers had to wear a cap with EEG sensors that registered when the brain became aware of an acoustic signal that reached the ears. The results showed that drivers behind the wheel of an Actros truck have almost as much time to react when traveling along a difficult stretch of road (e.g. construction site, mountain pass) as when they drive along easily navigable highways. The situation in the LP 1620 is quite different: The EEG showed that it takes the driver of that truck up to 400 milliseconds longer to respond to sensory stimuli than in the Actros. In a dangerous situation, this time difference would mean braking of the truck would begin nine meters later if moving at 80 km/h. Given the long lines of vehicles on today’s highways, it is clear what the consequences of such a delay could be.

DTM: First Win of the Year for Gary Paffett

Enjoy an evening in May in the Museum restaurant