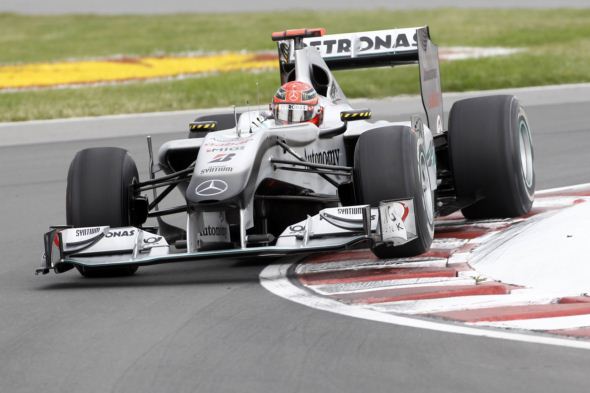 An action-packed Canadian Grand Prix at the Circuit Gilles Villeneuve in Montreal today saw Nico Rosberg come home in sixth place, making up four positions on his grid slot, with team-mate Michael Schumacher finishing in eleventh position after an eventful race which was compromised by a puncture.

In a race that was all about managing the tyres, Nico started on the option and recovered from a poor start which pushed him down into the midfield. He pitted early on lap five to switch to the harder prime tyres and set some quick lap times before his second stop on lap 27 for a further set of primes. From there, Nico drove well to manage his tyres and position, finishing in sixth place.

Starting on the prime tyres, Michael got away well off the line and was up to eighth place by the end of the first lap after starting in 13thposition. He stopped on lap 12 for his second set of primes and was battling with Robert Kubica for seventh place before a front right puncture forced him back into the pits on lap 14. Michael made his third stop for option tyres on lap 33 and had to nurse his tyres to the end of the race before eventually finishing in 11th place.

“Sixth place was probably the best result that we could have achieved today so I’m pretty happy. It’s been a difficult weekend with a poor qualifying performance yesterday due to the tyres not working properly and I was unlucky on the first lap today to lose so many places from the chaos in front of me. But from there, I was able to do some good overtaking and push to make up the positions and our pace was quick. We had a great strategy but it was really difficult to manage the tyres. I drove smoothly to control the graining but every time I looked in my mirrors, it was getting worse. Thankfully the primes held after my second stop so we were able to finish with sixth place and get some decent points moving me up to sixth in the Drivers’ Championship.”

“At the start, everything went great and we made up places as we had been hoping for. The first stop was perfectly timed so it was looking quite promising. Then I had a puncture on the front right tyre after my first pit stop, after I got together with Kubica, and that obviously decided my race. From there, I was stuck in traffic and there was nothing more to do because today our weapons were not very sharp. Towards the end, I was trying as hard as I could to defend myself but it was only possible to a certain degree and my tyres were just ruined after having done more than half the race distance. I was fighting cars with a good top speed which was quite tough. Otherwise I would have been in a good position I think so we have something to take away to the next races.”

“We had a messy start to the race which unfortunately is what happens when you start in the midfield. Nico was blocked and Michael was hit which broke part of his front wing. Nico then had a very good race to recover up to sixth place. We called the tyres perfectly, Nico was fast where he needed to be, looked after the car when required and generally had an excellent race. Michael was looking strong in the first phase of the race and was very well-placed. Unfortunately the incident with Kubica punctured the right front tyre and coming in for the extra stop meant we were out of phase with where we wanted to be with the tyres. With hindsight, it was over-ambitious to try and get the option to last as long as we did and Michael really struggled towards the end. We’ve come away with some points from the weekend but not as many as we would have hoped.”

“It was a great race today and fantastic for the sport and of course the spectators here in Montreal and worldwide in front of their televisions. Our speed looked much better today than in qualifying and it seemed like we were in for a good race with Michael as high as third place in the early phase of the race. Without the puncture, Michael could certainly have achieved a respectable result. For Nico, sixth place was a good result and posting the third fastest race lap shows that our speed compared to our competitors was better than yesterday in qualifying. However we need to improve our car further and we will. Congratulations to Vodafone McLaren Mercedes on their second one-two victory in a row. The victory marks the 72nd win powered by Mercedes-Benz in 224 races since 1997 which is an impressive score. Well done to McLaren and our committed engine guys in Brixworth and Stuttgart.”

The new CLS to come